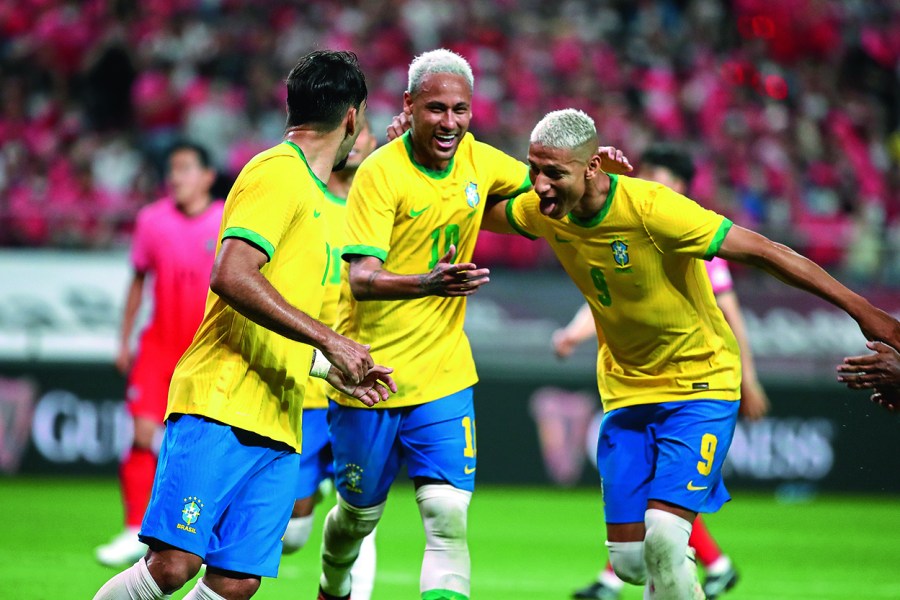 Twenty years have gone by since Brazil last won the World Cup. Every campaign since then ended when they came up against European opposition in the knockout stages, such as 2018 when coach Tite’s side fell to Belgium in the quarter-finals. It is one of just two defeats that Tite has suffered in the 42 competitive matches of his six-year reign. But both have been big ones – the other at home to Argentina in the final of last year’s Copa America.

Since then, though, the team would appear to have made great strides, with the emergence, amongst others, of Vinicius Junior and Raphinha adding attacking options to a line-up which has been displaying impressive defensive solidity.

Brazil were not far off in 2018 and surely earned the right to take that Belgium match into extra-time. They look better now and will take some stopping in Qatar.

Brazil mark high, making it hard for their opponents to play out, and seek to have the bulk of possession. With the return of wingers, the full-backs are now expected to make up the extra man in midfield and appear in the attacking line as an element of surprise.

A huge World Cup in the career of the eternal wonderkid. Qatar 2022 will do much to define his legacy in the eyes of his compatriots.

Charismatic and competent, has won everything in his grasp with the exception of the World Cup. Surely bound for Europe?

Tite almost certainly regrets dropping Marquinhos on the eve of Russia 2018. This time the Paris Saint-Germain man is a cert. But who should partner him at centre-back? The experience of Thiago Silva? Or Eder Militao, with his recovery speed? Marquinhos and Militao did not concede a goal together in qualification.

Who’s the second man in midfield?

Alongside anchorman Casemiro, Fred has been doing well. But the coach would ideally like more in the final third, and the rise of Bruno Guimaraes is well-timed. But there is another, bolder alternative…

Fitting in all the attacking talent…

Tite has not been able to field all his attacking players together – wingers Raphinha and Vinicius Junior, plus a centre-forward (Richarlison or Matheus Cunha), Neymar and his natural partner Lucas Paqueta. But is there room for all of them? Someone has to miss out – unless Tite trusts Paqueta enough to play him as the second man in midfield