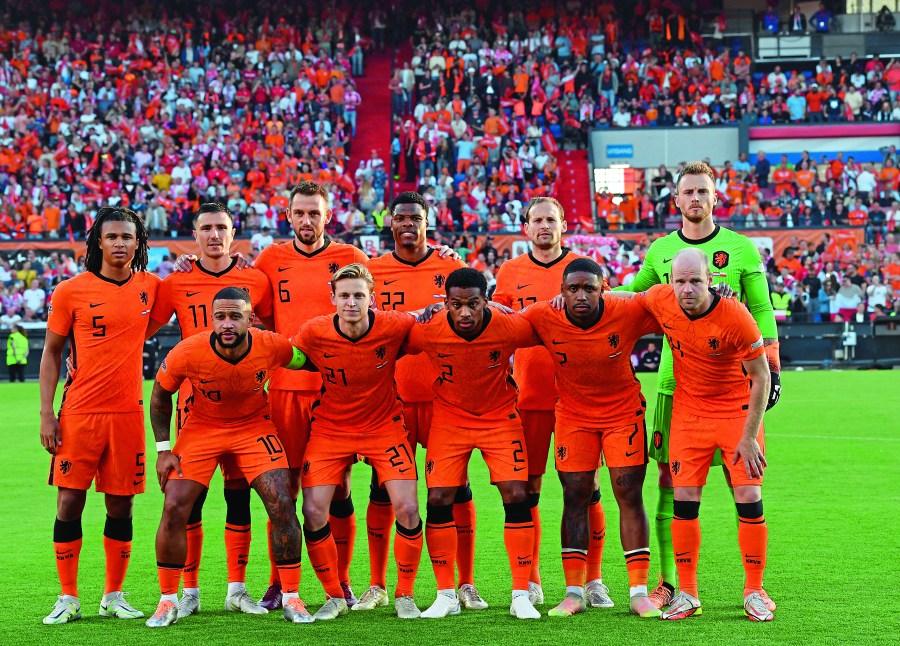 After losing 4-2 away to Turkey the Oranje made a poor start in qualifying, and failing to reach  consecutive World Cups was a real possibility.

But, following a disappointing Euro 2020, coach Frank de Boer resigned. The Dutch FA turned to the only man they trusted to steady the ship: Louis van Gaal. The 70-year-old started with a 1-1 draw in Norway, and then they controlled the group with Norway and Turkey dropping points. However, in the penultimate game against Montenegro they almost blew it by throwing away a 2-0 advantage in the last ten minutes. It all came down to the last game. Sitting in a wheelchair after breaking his hip, Van Gaal guided his team to a 2-0 win over Norway in an empty De Kuip.

Van Gaal has switched from 4-3-3 to 5-3-2 – just like he did before the 2014 World Cup when the Netherlands finished third. The experienced coach wants more security in defence, while
he also believes he lacks good enough wingers to play with three up front.

Commanding central defender and skipper, who missed Euro 2020 through injury. Will be vital on and off
the pitch.

In his third spell in charge, Van Gaal will retire after the World Cup after revealing he is suffering from prostate cancer.

Is there a place for the previously influential Georginio Wijnaldum?

Wijnaldum was omitted from the Nations League squad in June due to his lack of game time at PSG. Unless things change, he may fail to regain his place for Qatar.

Who will be the first-choice keeper?

With no world-class keeper available, Van Gaal picked the unknown Mark Flekken – who has never played in the Eredivisie – labelling the Freiburg man as “a Van Gaal goalkeeper”. Feyenoord’s Justin Bijlow looks the best option, but he is injury prone, meaning Jasper Cillessen got the nod recently. Van Gaal also likes to pick a penalty specialist, but it is hard to see Tim Krul repeating his heroics of 2014.

Who will be the joker in the pack?

Van Gaal has made some surprise calls recently – AZ defender Bruno Martins Indi, who hadn’t played since 2017, got another chance, while Bologna’s Jerdy Schouten also got a call-up. The biggest shock was recalling Vincent Janssen, who hit just three goals in 28 games in Mexico.