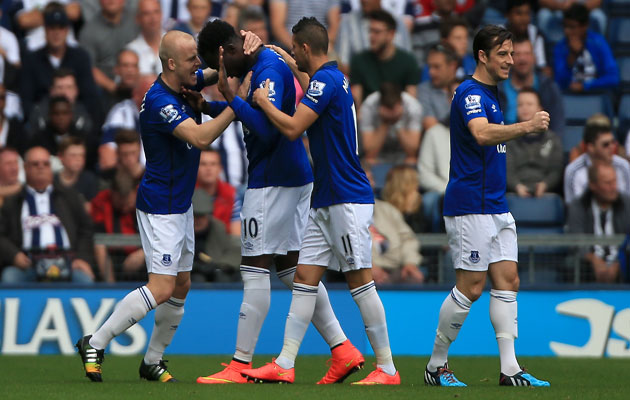 Romelu Lukaku, which in Flemish roughly translates as ‘thoroughly likeable and gifted young man’ (probably) displayed just how thoroughly gifted he is against former club West Bromwich Albion by hitting an exquisite curled shot into the opposing goal from outside the area, before showing how thoroughly likeable he is by not flaunting his achievement in front of his former fans.

That lack of visible excitement proved too much for Shearer, a man who in his playing days was hardly synonymous with the word ‘exuberant’ himself.  Indeed it caused him enough distress to go on a (relatively) impassioned mini-rant against players who don’t celebrate when they score.  Well, it made a change from his usual role of helpfully providing the audio description for Match of The Day’s blind viewers anyway.

This is not the first time Lukaku has shown worrying signs of behaving in a manner ill accustomed to that of a modern day Premier League footballer.

First of all there is the fact he is fluent in 6 languages – a total waste of time when we all know most people can speak English anyway.  Then there was his appalling modesty when he turned down a Champions League medal with Chelsea at 19 years of age because he didn’t feel like he deserved it (presumably JT put him straight on that one).  And now the final nail in the coffin – his decision to show modesty and respect towards the fans who supported him and cheered his name when he scored his first goals in a foreign country as a 19 year old kid.

Shouldn’t he be out spit-roasting strippers with Lamps, eating nachos with Crouchy or shooting work experience students with Cashley?  It’s no wonder he didn’t fit in at Chelsea really – a club, let’s not forget, that are captained by a man found guilty of racism by the FA and with a list of morally questionable misdemeanours longer than Emmanuel Adebayor’s ‘committed’ 2009 goal celebration sprint.

Ah Adebayor.  The archetypal pantomime villain: a man who hails from one of the poorest nations on Earth and decides to move to Manchester in order to earn enough money to ensure his entire family can be lifted out of poverty forever.

Then of course we have the real scoundrels – the Faustino Asprillas (spit!) and the Andres Iniestas (ptooey!).   These are players who have been known to voluntarily expose their torsos or undershirts in the heady midst of their senseless post-goal delirium.  One can only thank FIFA for ensuring these despicable rascals now receive a mandatory yellow card for failing to control their base emotions which, in their temporary mindless state, lead to them forgoing their commitment to model the logos of their club and league’s various multi-million pound sponsors.

Not our Alan though.  Knew where you were with him didn’t you?  One hand, over the head.

Next time Lukaku scores (and I imagine it could be in Liverpool sometime soon after 12.45 this Saturday afternoon) I hope he answers his critics and celebrates his goal.

Perhaps by lifting one arm up into the sky…

It’s what I’d do anyway.  But Lukaku probably won’t because he’s a better person than I am.  For starters he’s probably not the sort of guy to hold 20 year old grudges against strikers who never signed his match day programme when he was a kid…