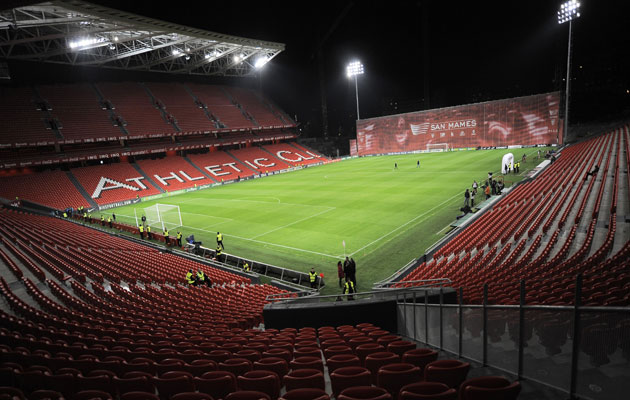 The Basque region. Famous for its ancient cultural heritage, powerful in its economic standing, and fierce in its un-erring desire for autonomy. This nation in all but official name straddles two countries and two seas. Characterised by its political and military struggles, it embodies the ideals of national identity and self-determination. Whilst unique in so many ways, the people are bound together by a desire to succeed in all they do based on a sense of community, work-ethic and patriotism: nothing encapsulates this more succinctly than their passion for football.

Nestled between the mountains and the ocean, the ancient port city of Bilbao is the largest in the Basque region and the tenth biggest conurbation in Spain. It is not only an industrial and economic powerhouse, it is also home to European footballing giant Athletic Club. Formed in 1898 by British workers in the steel foundries and shipyards, the English spelling of the word ‘Athletic’ is a reflection of its British influenced inception. Despite its foreign roots the club quickly grew as a symbol of regional unity, and only four years after its creation Athletic had captured the Copa del Rey.

The nature of Athletic Club’s individuality can be explained with some simple facts; they have never been relegated from La Liga, winning it eight times in the process; they are governed and owned by over 44,000 members; and in their 116 year existence they have only ever fielded players with Basque heritage.

This last fact is astounding in terms of the length of time it has been adhered to, and even more so in the context of the globalisation of the modern game. Athletic Club are quite simply a rock standing defiantly in the face of a torrent. This stipulation (known as La Cantera policy) is completely at odds with the commercialised, financially driven characteristics which personify football in 2014, and is in many ways a gaping hole in the clubs armour. One could assume that a day will come where a choice is required between these proud values, and the very survival of this institution as a whole.

However, if you posed this assumption to any resident of Biscay’s principle city you would be faced with a wry smile and a twinkle in the eyes, because Athletic Club have La Cantera de Lezama.  La Cantera means literally ‘The Quarry’ and refers to both the Basque only recruitment policy, and the broader idea of a farm for harvesting players from the region. Lezama is the name of Athletic’s training complex, and this football factory churns out the quality products which are enough to sustain their status as perennial contenders against those omnipotent behemoths: Barca and Real.

The Spanish Basque country is home to around 2.3 million inhabitants. Put into context this is a similar population to the Birmingham metropolitan area. Whilst historically there have been instances of players with Basque grandparents or naturalised Basques playing for the first IX, the hard fact is that the majority of the club’s future stars must be found within this pool of citizens. This alone may seem like a tough ask, but Athletic Club’s Cantera must battle against Basque counterparts Real Sociedad, S.D. Eibar (both currently in La Liga), Deportivo Alaves and C.A. Osasuna (both from the Segunda Division) in order to snare talent. Of these clubs only Sociedad have ever followed the Basque only rule, which was abandoned in 1989 when they signed John Aldridge from Liverpool.

Athletic Club have cast their net across the whole of the region, associating themselves with around 180 youth football clubs. This process includes offering some training sessions, coaching advice but most importantly the ability to siphon off the cream of these players. On the next rung up are the development centres where a slightly higher level of talent is given hands on instruction from Athletic Club’s own coaches. Finally the young players with the highest potential are welcomed to the Lezama complex just outside Bilbao itself, where the refined process and methodology gives them the best chance possible of their potential being harnessed, nurtured and translated into the finished article.

Through a combination of home-grown talent and the purchase of Basque players, Athletic can boast quality personnel throughout its history. From diminutive hitman Rafael ‘Little Duck’ Moreno in the 1910s and 20s, record goalscorer Telmo Zarra in the 50’s, to legends such as Goikoetxea and Zubizarreta, part of Javier Clemente’s team who took the title twice in the 80’s. Whilst some of these players left the club, the fees they commanded could be reinvested in the cultivation of the next stars on the conveyor belt.

However, in the 1995/96 season (just three years short of the clubs centenary celebrations), events arose which shook Athletic to the core. Finishing just four points above the relegation zone in 15th place, they had come much too close for comfort to breaking that proud tradition of top-flight participation. La Cantera de Lezama also faced a devastating threat: the Bosman Ruling. The law designed to protect players rights as employees meant that when their contract was up, the individual could transfer with no fee due to the parent club. For a club with such a strict recruitment policy the future was suddenly shrouded in doubt.

Facing this combination of low achievement on the field, and the danger that the club’s painstaking efforts off it could be undone with players leaving for free, they were forced into a period of introspection. Not only did Athletic need to put in place a definitive methodology to make sure that the quality of players emerging were of the highest possible ilk, they also needed to instil a characteristic deep in their players that could not easily be discarded: loyalty.

The process which began in 1995 and still exists today looks to instil a feeling of identity and association in the young players, from those in the small feeder clubs to the children whose potential is held in highest esteem. The mantra is inculcated that they are a) representing their people, their identity and their heritage, and b) have one focus in all they do: to represent the first team at the San Mamés stadium, the greatest honour of all. This feeling of belonging is consolidated through the process of appointing coaches who have either represented the club at some level, or who are from the very communities which will spawn the next generations of Basque Galacticos.

I contacted former player and current youth director Jose Mari Amorrortu, and a document he gave me breaks down the refined methodology his staff employ. Player development is shown to focus on hard work, technical ability, intelligence and creativity, producing driven and self-critical individuals. The coaching encourages players to think for themselves within the structure of a team unit, to be adaptable, and to hone their decision making skills with the ultimate aim that the correct decision is instinctive. Physically they want players who in Jose Mari’s words are, “fast, tough and powerful”. He continues, “We want our players to feel respected, valued and trusted.”

Formations are set up to match that of the first team, with players at a young age taking turns in all positions to understand the dynamic of the system, and as they get older to be honed in the art of a specialist role. This idea means that as a player in the first team is injured, leaves or loses form, a replacement who is well versed in that given role can seamlessly slot in without disruption to the dynamic. For some time the formation has been set as a 4-3-3 in a similar style to the recent Barcelona team, with a deep lying defensive midfielder, and two wide attacking forwards who cut in on goal. The reign of Marcelo Bielsa saw a variation with the use of his 3-4-3 system, where the central defender doubles as a creative midfielder. Bielsa’s system placed Javi Martinez in this role, and the idea filtered down to the youth squads in turn. Both of these systems require superb stamina, excellent organisation, and a tactical nous that only the most intelligent protégés can exude. With these filters in place it is all but inconceivable that a player of insufficient quality will make it anywhere the senior eleven.

So, nineteen years after this recalibration how can its success be measured? Well there is no doubt that the club has continued to fire out superstars into the footballing stratosphere with consistency. The fourth place finish in 2013/14 (which was accompanied by a Champions league spot) is a display of the clubs continuing strength, and whilst the poor start to the 2014/15 season has been disappointing it is by no means a crisis. In terms of La Cantera policy, the biggest negative of recent times must be that of Fernando Llorente’s Bosman free transfer to Juventus. His desire to leave was greeted with great derision amongst the fanbase, and the ire which waved him off show the price of disloyalty. The flip side of this can be seen in a player such as Iker Muniain, who at nineteen had played 100 times for Los Leones, and whose style, effervescence and passion embody the spirit of Athletic Club.

As a passionate follower of the beautiful game I find Athletic Club’s story irresistible, a story which pushes the majority of modern football into the realms of ugliness. If even a handful of professional clubs could move toward this ethos, there’s no doubting that the footballing world would be a much better place.