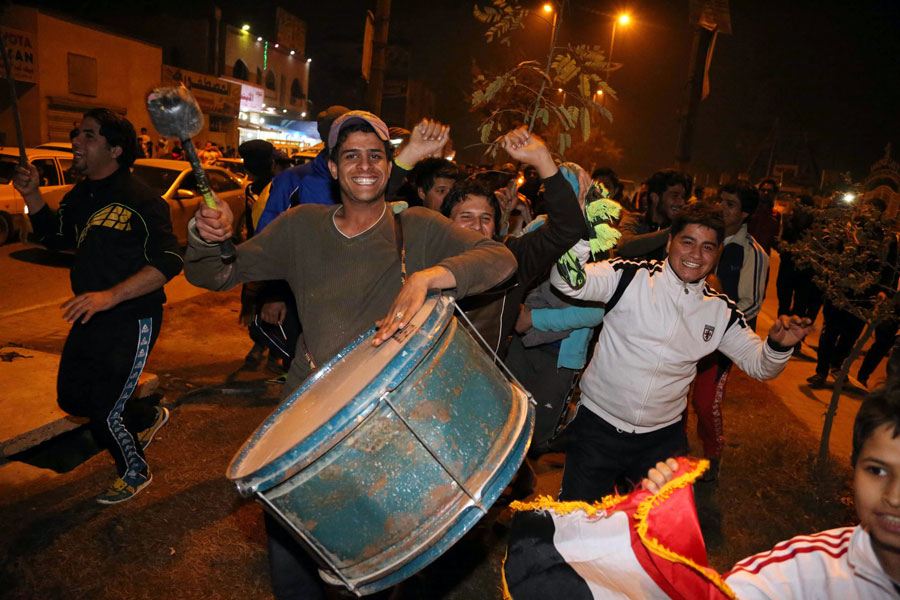 Mohannad Abdul-Raheem Karrar – the 2012 Asian Youth Footballer of the Year and a previous AFC U-19 Championship’s MVP – scores the match winner with a composed finish past the Saudi keeper in the finals of the AFC U-22 Championships in Oman.

The beginnings of footballing splendor evolved yet again from within the nation where an average day in the life of an Iraqi living in Baghdad consists of struggle for food, worrying about when they might be caught up in a random blast, worsening economic conditions, worsening sectarian tensions, and more blasts.

Having won Asia’s most coveted trophy in 2007, there were high expectations from the Lions of Mesopotamia to advance and surpass the popularity of the GCC nations in the region. And so they did.

With several significant achievements (mostly in the Asian scene) since the war in Iraq, the recent footballing past of the country, at all levels, did not disappoint either. I spoke with Zeyad Hamid, the International Relations Manager at the Iraq Football Association, to find out more.

“In 2012 and 2013 we achieved something as our National “A” team got the second place in WAFF championship and also came second in the Gulf Cup. Our U-20 team came in fourth place in FIFA U-20 WC whereas the U-19 came second in the AFC U-19 Finals.”

Obviously, this has helped the government identify the one element that could bring a nation of different factions together and work towards strengthening the bond that football had created. Authorities are working closely with the Iraq FA to build infrastructure across the country.

A state of the art 60,000 capacity stadium is currently been deliberated in Basra Sport City – a complex that will host another stadium capable of seating 20,000, four 5-star hotels and 6 training pitches. In fact, the design for the flagship stadium was chosen as possibly the third best stadium in the Middle East. This project would have a positive impact on the people of Basra and neighboring cities but what about the rest of the country?

“The main issue is the lack of stadiums but currently the government is building new stadiums in different provisions. The IFA had previously been contracted with top coaches for example Zico. According to FIFA regulations the government should not interfere the FA work in anyway but could help financially and this is what we see happening in Iraq with the yearly budget, etc. The IFA has also established football schools in Iraq such Amo Baba School along with the grassroots league for U-19 and U-16 in Baghdad and other provinces. Such schools & leagues will help to promote football in Iraq.”

It is quite clear that the problem is not governmental, at the moment at least, but the league is not managed professionally, which brings no investments into it. It is understandable considering that the first primary objective of the country would be to gradually sustain itself.

“The problem here is the infrastructure of the clubs. As you know the AFC regulations mention that each club should have a stadium and the stadium should be in accordance to Stadia Regulations. The first step to turning professional should start from the clubs and such projects need help from the government to the clubs and IFA.”

No international clubs have come forward lending support both financially and operationally, but the FA received much needed help from football’s governing body FIFA and the AFC. Help, which came in the form of financial assistance programs or course developments.

The assumption would be that majority of these clubs would reach out to the government for financial aid instead of trying to approach the private sector. Television, airlines, oil companies and many other industries are flourishing in Iraq then why are they being left out?

“I think it’s the club’s problem. None of the clubs have a marketing department or even a marketing manager.”

Yet, with all the progress in the sport, Iraq has had issues hosting national teams for friendly games. In fact, in a recent and one of the first few home games since the war (against Liberia) there was an incident outside the stadium during the game. One could see a layer of black smoke in the background while the game was still on. These incidents have not been uncommon across the region in recent months.

“Before the match against Liberia we held a match against Syria in Baghdad. The incident happened after the match and it’s not big issue. Similar incidents happen in other places in the world for example in Lebanon last month. These terrorist attacks do not occur all over Iraq. Moreover, IFA is arranging high level security during the matches to insure the safety &amp; security of all parties.”

Because of the latest FIFA ban on hosting friendly games in Iraq, the difficulty comes in finding hosts and the eventual costs associated with playing outside. This very reason leads to problems with proper preparations before an event. Yet, it is commendable to monitor how the team manages to astonish the region and Asia in particular. Because of this popularity, several Arab nations including UAE, Qatar and Jordan have extended their support to Iraq when it comes to friendly games.

And it is not just the men that are in the limelight. Iraq is slowly opening up to the idea of their women putting on the boots and stepping on to the field,

“The IFA held a women’s league and also one for FUTSAL and Beach Soccer. Training courses held by IFA in cooperation with AFC for Women Coaches also IFA conducted courses for Women Referees.”

Will we soon see women participating in the AFC Championships?

“Not in the next year but sure you will see Iraqi Women Team in AFC Championships. In some regions of Iraq, it’s not acceptable for women to play football but in some other regions it’s OK so we are working to develop women’s football not only in these regions but all over Iraq.”

As the football fraternity looks ahead to the atmosphere which comprises all things Brazilian, Iraq is looking towards the not-too-distant Asian Cup followed by the World Cups in 2018 and 2022. If the U-22 tournament was a measure of what awaits Iraq, it can only be good. For now, Iraqis can divert their minds to matters of peaceful co-existence through football than sectarian violence.