At first glance, a trip to Livorno’s Stadio Armando Picchi appears to be an ordinary footballing experience. The 19,000-capacity arena may rarely sell out, but the area behind one goal is invariably densely populated with Livorno’s most vociferous followers, who congregate there to sing songs, display banners and wave flags.

So far, so normal. Yet on closer inspection, there is nothing conventional about Livorno’s supporters at all. The songs they sing do not just hail their star striker’s goalscoring abilities, they praise Che Guevara’s revolutionary spirit. The banners they display do not just disparage their rivals, they express solidarity with their employment troubles. The flags they wave are not Tuscan or Italian, but Cuban and Soviet Russian. Livorno fans are proudly Communist, and their home matches are used as an opportunity to show it.

Italy only became a united nation in 1861, and Livorno’s own history is perfectly representative of the country’s previous existence as a patchwork of competing city-states ruled by different dynasties. Built as a coastal fortress to protect the powerful Pisans from attack in the eleventh century, Livorno went on to be owned by Genoa and Florence before becoming a city in its own right.

It was in its period under Florentine ownership that today’s left-leaning political tendencies began to surface: the Medici family, who ruled the Republic of Florence for four centuries from the 1300s, built a new port in Livorno to improve trade and encouraged merchant workers from any background to move into the city and make it their home. Jews, Turks, Persians, Moors, Greeks and Armenians all did exactly that, creating a cosmopolitan mix of different ethnicities and religions; despite the diverse backgrounds, a strong sense of camaraderie and unity was soon fostered among the new Livornese citizens, the majority of whom worked long, hard days as dockers or fishermen. The workers were not afraid to protest against their wealthy bosses if they felt they were being unfairly treated, and when the unification of Italy led to Livorno losing its status as a free port, the people of the city demonstrated their inclination for activism by vocally challenging the decision in public.

It was within this political setting and social context that the Italian Communist Party formed in Livorno in 1921. Antonio Gramsci and Amadeo Bordiga, disenchanted members of the Partito Socialista, broke away to form the new group, deliberately choosing a birthplace where their cause would garner instant support. The party was banned by Benito Mussolini’s fascist regime a few years later, but went on – along with the city of its inception – to play a key role in the nation’s resistance movement. Even today, Livorno regularly elects far-left candidates in both regional and national ballots, its socialist identity now firmly entrenched.

The politicisation of football fan groups in Italy is a direct result of the country’s regionalism and post-Second World War history. From 1946 to 1992, the Christian Democratic party won the most votes in every single election for both of the country’s legislative chambers, their centrist positioning and catch-all nature allowing them to appeal to constituents from right across the political spectrum.

As time wore on, this led to disillusionment and frustration among sections of the electorate: the broad church setup of the Christian Democrats combined with the inevitability of their success meant that citizens felt their views were not being truly represented, and everyday life became increasingly politicised as people sought other outlets for their ideological beliefs. Football became one of the principal vehicles for expression, and clubs’ ultras began to revive or intensify political identities based on their town or city’s unique social history.

This helps to explain the atmosphere at Livorno matches, which are about far more than just the football. Aside from the aforementioned songs, banners and flags, the Amaranto’s fans have led fundraising initiatives after earthquakes in L’Aquila and Haiti, voiced their sympathy with Palestinian and Irish nationalists and unveiled birthday messages to Joseph Stalin and Fidel Castro. They have also developed friendships with the fellow left-wing fanbases of Marseille, Besiktas, St Pauli, Celtic and AEK Athens, while fierce rivalries exist with Italian sides Lazio and Verona, whose followers tend to be on the far-right. These relationships reinforce Livorno’s political character, and it is now very difficult to envisage a dilution or fragmentation of their collective identity. 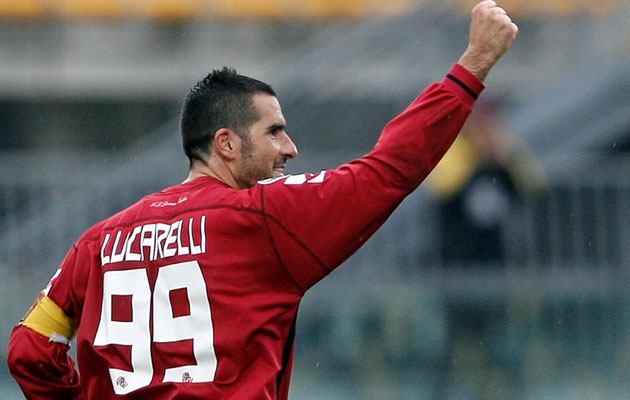 Most young fans dream of one day representing their childhood club, and Cristiano Lucarelli was no exception. Born in Livorno in 1975, Lucarelli realised his lifelong ambition in 2003 when he signed for his hometown club from Torino, taking a £350,000 pay cut and dropping down a division to do so. “Some players buy a yacht or Ferrari [with their wages]”, the striker explained shortly after joining. “I just bought a Livorno shirt”.

Lucarelli was a hero to the Livornese public not just because of his on-field exploits – the target man netted 102 goals in 174 league games across two spells – but due to his political and social beliefs and willingness to voice them.  He introduced himself to the Italian public by revealing a Che Guevara t-shirt after scoring in an under-21 international against Moldova, an action that saw him ostracised from the Italy setup as the football authorities tried to steer clear of unnecessary controversy.

A particularly good domestic performance was dedicated to 400 sacked Florentine factory workers, meanwhile, and the number 99 jersey Lucarelli – who used the socialist anthem ‘Red Flag’ as his ringtone – adorned at Livorno was a tribute to the club’s leftist ultra group, the Brigate Autonome Livornese, who were formed in 1999. Lucarelli was the perfect embodiment of what it meant to be from Livorno, and the fans loved him for it.

Relegated back to Serie B from Italy’s top-flight last season, Livorno and their fans will be under much less scrutiny this campaign. Their worshipping of Castro and Guevara and pledges of solidarity with proletarians across the world are definitely not for show, though, and the dogmatic affirmations would likely continue even if they were the only people inside the stadium.

The fans’ actions have occasionally landed the club in trouble in the past – the booing by some supporters during a tribute to Italian troops killed in Iraq led to widespread condemnation, despite Livorno fans insisting that they were merely voicing their disapproval at Italy’s involvement in the war – but, for better or worse, the Amaranto are unlikely to tone down their public avowals of the Livornese political creed any time soon. The football may not always sparkle and Livorno certainly lose their fair share of games but, according to the club’s followers and the famous Chilean communist song, ‘the people united will never be defeated’.

Strategically placed Galatasaray can enjoy the best of both worlds

Football in France and the significance of World War 1