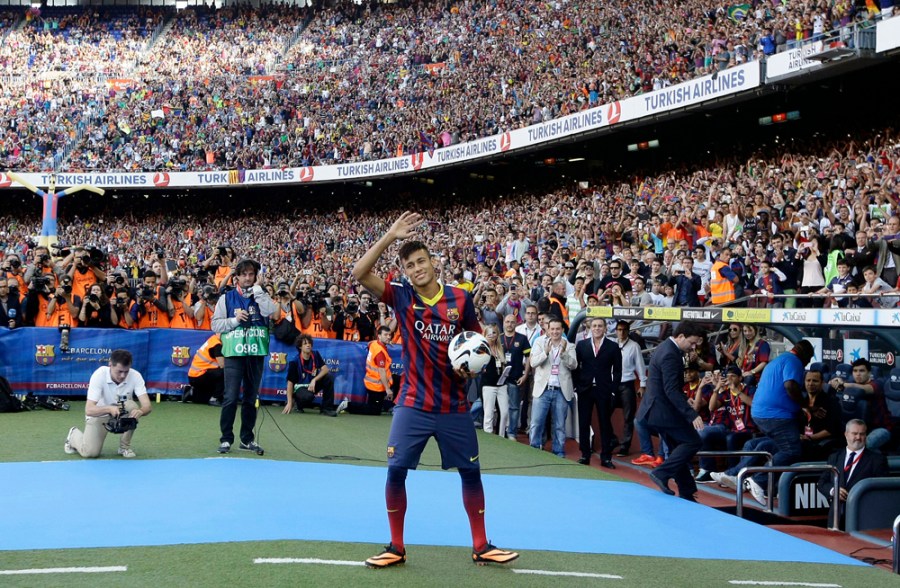 New president Josep Maria Bartomeu, who stepped up after the scandal-enforced exit of Sandro Rosell, is reportedly prepared to pay between €9m and €13m to the tax authorities to head off a damaging court case.

Last week a formal complaint was registered by the taxman that Barcelona had evaded payment of that sum on €38m of hitherto ‘secret’ payments made between 2011 and 2013 to ‘companies’ acting on behalf of Brazilian superstar Neymar and his father/adviser.

Barcelona’s settlement would be a further concession that Rosell had been economic with the truth in his original insistences about the transfer. Rosell claimed Neymar cost the club ‘only’ €57.1m. Other estimates have estimated the deal, including the confidential pre-contracts, at around €95m if not more.

Initially the local Catalan media had ignored the gathering storm but newspapers, radio and television stations could not ignore the significance of Rosell’s exit and the reasons.

Hence questions about the issues began to be asked, for the first time, of the squad and coach Gerardo ‘Tata’ Martino. Players and Martino tried to shrug it all off, insisting that these were issues only for the directors.

However that impression was exploded when Neymar broke his silence on his Instragram account to launch a lengthy defence of his father’s role in the business and attack Santos, his old club.

Santos, who received only €17.1m for Neymar, are pursuing through the Spanish courts a right to view all the confidential contracts agreed between Barcelona and Neymar.

Revealing the pressure he felt, Neymar said: “I am sick and tired of this … I’ve had enough of all this talk.

“I am a fan of my dad for having put me where I am, and if he makes millions from that, what’s the big deal? He worked for it, it didn’t just fall in his lap. Enough is enough.”

Inevitably, then, the weekend defeat by Real Sociedad and Martino’s half-time dismissal from the bench for dissent will be viewed as evidence that the pressure is being felt in the dressing-room.

Legal experts have suggested that, were a tax evasion case to be prosecuted successfully, Barcelona could be fined up to six times the amount owed ie €54m. Hence it is in the club’s financial – let alone public relations interest – to reach a settlement.

Separately Rosell, Bartomeu and vice-president Javier Faus, who all signed off on the various Neymar contracts, face a court complaint for malfeasance from the right-wing watchdog Manos Limpias [‘Clean Hands’].