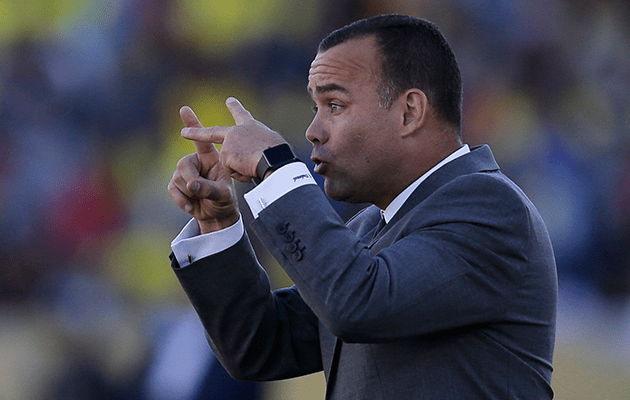 It made perfect sense for senior coach Rafael Dudamel to take charge of Venezuela’s Under-20 team – who finished third in the South American championships and duly qualify for the World Under-20 Cup in South Korea later this year.

In this continent the Under-20 sides are an important conveyor belt to the senior side.  Under-17 football plays its role in development, but comes too soon to know which players will kick on to star at senior level.  Under-23 football no longer exists on any regular basis, and anyway, by that age almost all the top players have all been sold abroad (Indeed, one of the striking features of this Under-20 tournament was that many of the best players are already with European clubs).

The Under-20s are, then, the closest thing around to the senior side.  Top European national teams will select players mainly based on club form.  That is harder in South America, where the players are scattered all over the world.  So form for the Under-20s is a powerful guide; those who have come up through the ranks have a head start; they have done well wearing the national team shirt in a pressure situation.

Between 1995 and 2007 Argentina were world champions at Under-20 level five times, producing a stream of players for the senior side.  Current problems in World Cup qualification surely have something to do with the sharp decline in the quality of the country’s Under-20 teams.  Uruguay, meanwhile, have invested heavily in this level, and are reaping the fruits.  Almost the entire senior side are Under-20 graduates, and the good news for the future is that, by some distance, Uruguay were champions in this most recent tournament.  Their only black mark was a 3-0 defeat against Dudamel’s Venezuela.

At the bottom of the 2018 World Cup qualification table with just five points from 12 games, there is no chance that Venezuela will make it through to Russia – which forces them to think of the long term, obliges them to focus on their problems and gives the Under-20 side an extra importance.

In truth, their problems at senior level are predictable enough, and can be put down to growing pains.  Their story is essentially one of the twenty first century.  In a land of baseball and beauty contests, football was slow to develop, and only really took off when the national team put together a string of victories towards the end of the 2002 qualifiers.

They kept making progress, and when they beat Argentina at the start of the 2014 campaign there seemed to be a real chance that they might make it through to Brazil.  In the end they fell back, but went into the current cycle with high hopes.  Cesar Farias, canny but cautious, was replaced as coach by the more attack minded Noel Sanvincente, who had been hugely successful in the domestic game – and the result was a disaster.

Sanvincente may not have excelled in terms of man management.  But his biggest error was surely that his idea was simply not viable.  Venezuela have some talent up front – big Salomon Rondon forms an interesting strike partnership with the rapid Josef Martinez.  But the defensive unit was ageing and creaking, and Alain Baroja, his first choice goalkeeper, was clearly not up to the job.  They simply did not have the defensive resources to attempt a more expansive game.

After just a single draw from the first six rounds, Sanvincente was out and Dudamel came in.  There has been some improvement.  Venezuela reached the quarter finals of the Copa Centenario, where Rondon and Martinez gave Argentina problems – repeated soon afterwards in World Cup qualification, when only a late rally gave Argentina a 2-2 draw.  But the goals have continued to go in – 12 in the 6 qualifiers under Dudamel. 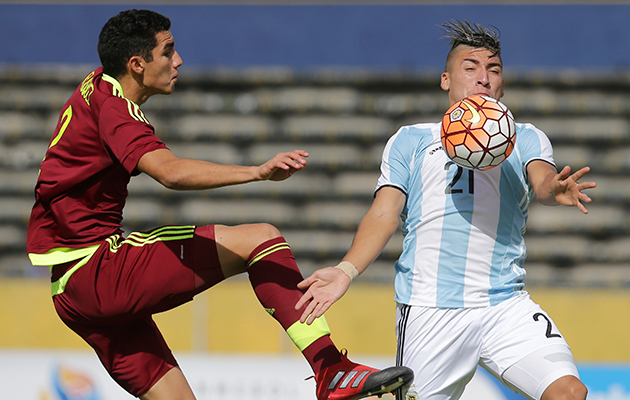 Williams Velasquez has a splendid tournament for Venezuela.

A priority for the 2022 campaign, then, will be forming a solid defensive unit – and it is here that the Under-20 campaign has been so encouraging.  In nine games in the tournament in Ecuador, Venezuela conceded just 7 goals, the best defensive record in the tournament.  There was a little wobble in the final game, a 2-0 defeat to Argentina where they lost concentration and conceded both goals in three minutes just before half time.  But the only other time they conceded more than one goal was in the last few minutes against Ecuador when they had already scored four.

Star of the show at the back was keeper Wulker Farinez, who only turns 19 on Wednesday.  Venezuela have been aware for a while that they had something special.  To pick up experience he was part of the senior squad for the Copa Americas of both 2015 and 16.  He may be a little on the short side, but he is a wonderfully lithe figure who seems set for a long international future.

In front of him centre back Williams Velasquez had a splendid tournament, with his partner Josua Mejias not far behind.  And there was no better right back on view than Ronald Hernandez.

It will be interesting to see how quickly Dudamel bloods some of these players in the senior side.  Might it be too soon to try some of them out in next month’s World Cup qualifiers against Peru and Chile?  There is, of course, always the risk that exposing them too fast might be counter-productive.  But the qualifiers for the next World Cup will get going in two and a half years – when it will indeed be a surprise if some of these players are not straining to set Venezuela on the road to Qatar.