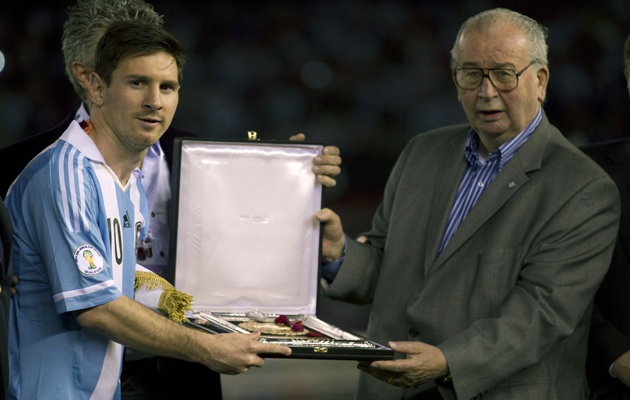 Rio police and public ministry agents staged raids in the city and Sao Paulo last week which led to 11 arrests plus the seizure of World Cup tickets, foreign currency, passports and mobile phones.

The leader of the gang has been identified as 57-year-old French-Algerian named Mamadou Fofana. Police had been monitoring his phones for three months in Operacao Jules Rimet and believe he has links within both FIFA and Match, the federation’s official ticketing partner.

Concerns over confidentiality meant that police did not notify FIFA or Match about its investigation, named after the French former FIFA president who is generally considered as having been the ‘father of the World Cup.’

One of the ticket seized was printed with the name of Humberto Mario Grondona, son of Julio and himself a FIFA coaching instructor and Argentina youth team manager.

FIFA spokesperson Delia Fischer said today that Humberto Grondona had been asked “for a written statement on his comments about the alleged selling of World Cup tickets.”

Grondona had stated, in an interview with an Argentinian television channel TyC, that he had bought tickets and passed them on to friends but without any further knowledge of what happened to them. He has denied selling them to touts.

FIFA also wants an explanation from Match of how tickets ended up in the posession of Fofana and companies linked to him.

Fischer said: “Match has been requested to provide a complete report on tickets and packages sold to the company of Mr Fofana and further companies. Match should outline the necessary actions being taken, including the cancellation of tickets to any further matches.”

Some media reports, quoting investigation sources, have suggested that one suspect had been staying at the Copacabana Palace Hotel which hosts FIFA’s senior directors.

Fischer said: “No member of FIFA staff or executive level member has been contacted in connection with Operacao Jules Rimet.”

She said FIFA had complied with all police requests for help and information. Further reports had claimed that police had demanded a list “of all foreigners employed by FIFA.”

Match Servicos de Eventos was created to operate local ticketing activities at the 2014 World Cup and is a subsidiary of UK-based Byrom group; another subsidiary is Match Hospitality which is FIFA’s corporate hospitality agent.

The last published accounts for Byrom, founded by Mexican brothers Jaime and Enrique Byrom, showed a turnover of £60.7m for the year to September 30, 2013, with pre-tax profits rising to £5.1m.

Company accounts indicate that Match Hospitality and another subsidiary entered into a loan agreement with FIFA to fund the companies’ obligation to provide accommodation services in Brazil.