The violence between Russian and Polish fans overshadowed a terrific match in Warsaw tonight. But trouble had been brewing all day, with tension in the air from early on. There was a heavy police presence around the stadium, with helicopters, horses and armed cops waiting for the inevitable.

The march by Russian fans celebrating Russia Day was a deliberately provocative gesture which was surprisingly given the go-ahead by Polish authorities.

Trouble flared along the route of the match, as Polish fans confronted the marchers. However, by the time the march had reached the stadium, the heavy police presence, with lines of riot police backed by armoured water cannons, had brought matters under control.

The police and Warsaw authorities will have been relieved at the 1-1 scoreline; a 1-0 win for Russia, which had looked likely after Alan Dzagoev’s first-half goal, would have provoked an angry backlash by Polish fans.

Nevertheless, it was still surprising to see riot police filing into the stadium with five minutes of the match remaining and positioning themselves in front of the Russian corner of the ground (see picture, below). 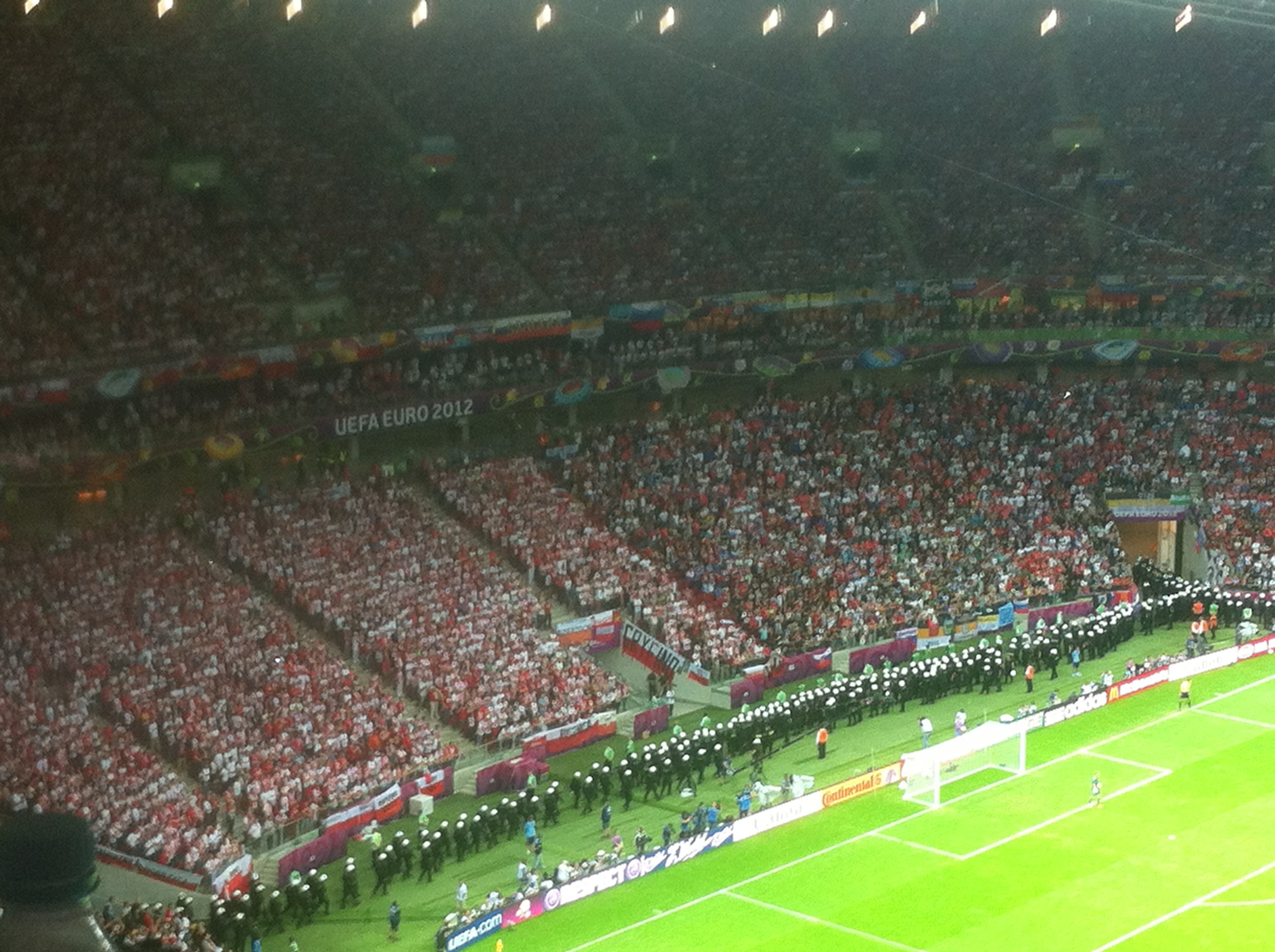 It seemed a highly provocative gesture which could have easily sparked trouble on the final whistle.

The 1-1 draw in Warsaw leaves Group B delicately poised going into the final round of games, with Russia on four points, Czech Republic on three, Poland on two and Greece on one. All four teams can still qualify for the quarter-finals. Russia need only a point against Greece, who must win that game to qualify at Russia’s expense. Poland have to beat the Czechs in Wroclaw, while the Czechs can qualify with a draw. All to play for!

The biggest bugbear of the tournament so far has been the kick-off being highjacked by the jumped-up stadium announcers in yet another example of the marketing wonks treating fans with utter contempt.

It wasn’t as bad in the final seconds before the start of Poland-Russia, because the home crowd had already generated a pretty special atmosphere. But at Spain-Italy, the atmosphere was totally killed by the Hollywood voiceover. When the music stopped, just before the ref blew his whistle, there was no roar of anticipation from the crowd, just silence and the realisation that we were at a football match, not a WWF convention.

In a last-ditch move to generate some positive PR, the Ukrainian government has announced that inter-city rail travel in Ukraine will be free for all accredited media for the duration of the tournament.

The media first enjoyed free train travel at the 2006 World Cup in Germany and the practice continued at Euro 2008 in Austria and Switzerland four years. UEFA pressed Poland and Ukraine to follow suit but the cost was prohibitive.

However, the steady flow of negative headlines over racism and boycotts of Ukraine by Euro politicians prompted a re-think.

The club with the most goalscorers at Euro 2012 so far? Wolfsburg, with two Mandzukic for Croatia (against Ireland) and one from Jiracek for the Czech Republic in today’s 2-1 defeat of Greece. And Vaclav Pilar, the other Czech goalscorer today and scorer of their only goal against Russia, is about to join them after the tournament.