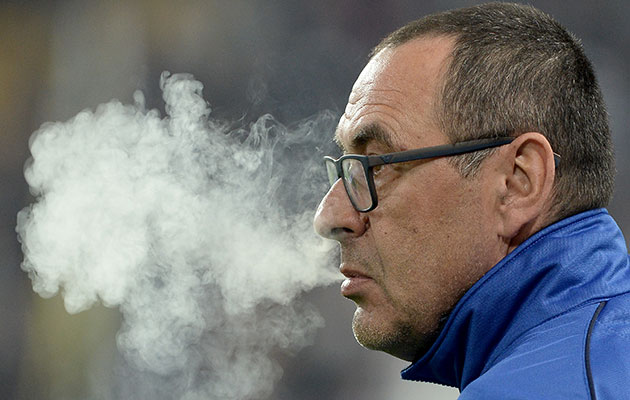 It would appear that Neapolitan street sellers are going to have a very good Christmas. 25 years AMD (after Maradona), Napoli are back on top of Serie A following their 2-1 defeat of Inter in a dramatic and spectacular top of the table clash at the San Paolo on Monday night.

First of all, this means that the famous Christmas cribs of Naples are going to be so full of miniature reproductions of Higuain, Reina, Insigne, Sarri et al that even the Virgin Mary and Jesus will struggle to get a look-in. An indication of things to come came on Tuesday morning when one crib seller proudly unveiled a life-size, wax model of Napoli coach, Maurizio Sarri, generally perceived by Napoli fans as the surpreme architect of the club’s current success. 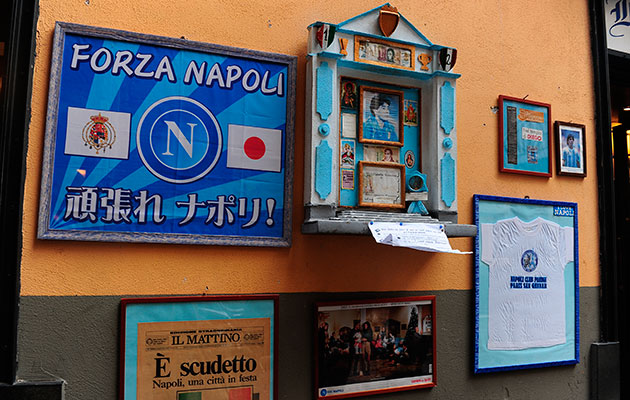 Whatever about the street sellers, Naples is getting ready to celebrate a New Year, the like of which the city has not seen the days of the legendary Diego Armando Maradona who, remember, led Napoli to the only two title wins of its history, in 1987 and 1990. The road from here to a title victory next May is a long and winding one but no one who saw Monday night’s game can escape the tantilising sensation that, 25 years later, this could again be Napoli’s time.

When the opposition hit the post twice in the space of one minute in the final seconds of a game, then you have to suspect that your team is more than lucky. Rather the sporting Gods have decreed that it is your destiny to win.

That, at least, was the way it looked in Naples on Monday night. 2-0 up after only 17 minutes, thanks to two terrific goals from Argentine striker, Gonzalo Higuain, Napoli looked like certain and easy winners by half time. Inter were struggling to get back into a game that had been marked by a whirlwind Napoli start which had seen Higuain put his team ahead in only the second minute.

Then just before half-time, Inter’s Japanese defender, Yuto Nagatomo, was sent off after he had clumsily clattered into Brazilian Allan to pick up his second yellow card. At that point, it looked like “game over” for Inter.

However, Roberto Mancini’s side have not been top or near the top of the table for most of this season for nothing. As Napoli inevitably ran out of both energy and agonistic fury ten man Inter got back into the game thanks to a 67th minute goal from their talented Serb Adem Ljajic.

That goal set us up for an extremely “nervous” final 20 minutes. Inter, who had gone into the game two points clear of Napoli at the top of the table, would obviously stay top with a draw. As a nervous Napoli became too defensive, dropped back too deep, they lost control of the game.

Napoli made absolutely no use of their numerical advantage, causing themselves problems by continually losing possession as they played out of defence. In the end, Napoli came within inches of throwing it all away when twice in the 94th minute, Inter hit the post, first through Montenegran striker Stevan Jovetic and then through Brazilian defender Miranda whose powerful downward header was turned onto the post by a brilliant save from ex-Liverpool goalkeeper, Pepe Reina.

What do we conclude from all of this? First, in the short term, Napoli have two outstanding heroes from the game – Higuain and Reina obviously. Secondly, and more importantly, the Napoli title challenge now looks like the real thing. When earlier this season, Napoli defeated Juventus, Milan and Fiorentina in consecutive games, the “scudetto” light started to flash.

However, those games at the end of September and beginning of October came too early in the season to be easily assessed. Had Napoli merely caught struggling sides such as the then Juventus and Milan at a bad moment? Had they made the most of their luck against Fiorentina?

Now, there is no doubt. Napoli are title challengers and the team to beat. Inter, just one point behind and impressive on Monday night for the manner in which they frightened Napoli despite being a man down for the entire second half, are clearly not out of the contest. Likewise Fiorentina, who were held to a 1-1 draw by Sassuolo also on Monday, still have plenty to say. Further problems for Napoli could come from the Old Lady herself who on Sunday night beat Palermo 3-0 to record her fourth consecutive league win to move just seven points behind Napoli.

One rival who may not represent quite such a threat is fourth-placed Roma, currently four points behind Napoli. On Sunday, Roma lost 2-0 at home to Atalanta, thus concluding a miserable week which saw them humiliated in a 6-1 Champions League defeat by Barcelona. So far this season, Roma have conceded 17 goals in 14 Serie A games and a whacking 16 in just five Champions League encounters. With a defence like that, it is hard to talk “scudetto”.

Which is more than you can say about Napoli. Even if the word “scudetto”, for superstitious reasons, is “banned” by coach Sarri, Neopolitan thoughts are certainly heading that way. Are the good times about to roll again?