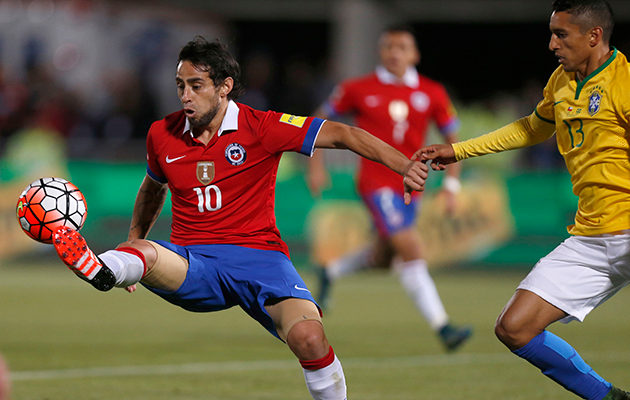 Argentina will be without Lionel Messi for the coming two rounds of World Cup qualifiers – and the statistics make the size of the loss very clear.  Messi has only played in 3 of the 8 rounds.  Argentina have won all three.  Their five games without him have brought just one victory.  His absence, then, is good news for Peru and Paraguay, Argentina’s opponents.

And the injury to Casemiro is good news for Bolivia and Venezuela, who Brazil face early next month.  New Brazil coach Tite has been quick to recognise the importance of the Real Madrid midfielder, describing him as the man who balances out his team.

There are some important absences, then, in the big two, currently tied in second place a point behind Uruguay in the continent’s World Cup qualification table.  But who will be included or recalled in a crunch match between two of the chasing pack?

After an extraordinary start – four consecutive wins – Ecuador have slipped badly back, adding just a single point from their next four to fall to fifth place in the table, the play –off slot.  And continental champions Chile had a dismal time in the recent two rounds and dropped back to seventh.  On October 6th the two sides meet in Quito.  Over the next few days their squads will be announced, with some big decisions to be made.

The Chile dressing room is known to be a difficult one to control.  Jose Sulantay, who coached the pair at Under-20 level, has argued that Alexis Sanchez and Arturo Vidal have a tendency to battle for supremacy inside the team.  This may have been made worse in the two recent rounds by the absence of keeper, captain and record cap holder Claudio Bravo, who made himself unavailable.  Reports that he was suffering an injury have not been confirmed.  It could well be that he was giving priority to getting settled in at his new surroundings at Manchester City.

Presumably his return would help matters, though there could be some resentment at an apparent ability to miss out on games when it suits him.

But the key name to look for is that of the eternal enfant terrible of the Chilean game, playmaker Jorge Valdivia.  A strong character and at times an unruly one, Valdivia has seldom been the fittest of players, and approaching 33 that is not likely to change.  But he brings something different to the Chile side.  Amid the frantic running around, him, Valdivia provides clarity with his defence splitting passes.  Previous coach Jorge Sampaoli said that Sanchez and Valdivia were the two players he could not replace.  Valdivia’s last game was the 3-0 defeat to Uruguay last November, Sampaoli’s last game in charge.  He was sent off at the end of the match, and his now available again after serving his suspension.  Valdivia, then, has not appeared under new coach Juan Antonio Pizzi, who decided not to select him for the Copa Centenario back in June.  Some Chile players make no secret of the fact that they would like to see Valdivia recalled.  Will Pizzi bring him back from Al-Wahda in the Arab Emirates?  All should be revealed on Tuesday.

Ecuador, meanwhile, have their own problem to resolve.  Quito, 2,800 metres up the Andes, has long been their mountain stronghold.  But with an increasing number of their players now based abroad, has altitude ceased to be an advantage?  Coach Gustavo Quinteros has been under pressure to make changes, and bring in more Quito-based players for the home games.  One leading candidate, all round midfielder Jefferson Orejuela of Libertadores runners up Independiente del Valle was taken to hospital after a clash of heads during Sunday’s league game against Emelec.

He might not be the only one with a headache.  As he looks through his options, coach Quinteros may also be scratching his skull as he wonders how to get his team’s campaign back on track.