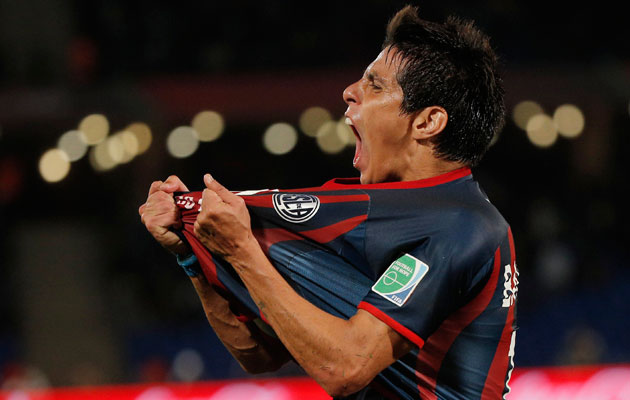 It was just over ten years ago – in Colombia in the South American Under-20 Championships at the start of 2005 – that Lionel Messi was unleashed on an unsuspecting world.  Even Argentina knew little about the tiny 17 year old who had played one friendly for Barcelona, but there were rumours of something special, and Spain seemed keen on winning him to their cause.  Argentina made sure they got in first – but they did not instantly award Messi with the number ten shirt.  Hr wore the 18, with the number ten going to Pablo Barrientos, a talented attacking midfielder from San Lorenzo.

Just over a decade later, both players were much in evidence last week.  Messi, of course, gave yet another dazzling performance for Barcelona against Manchester City in the Champions League, stamping his authority on proceedings as his club reached the semi finals.  His club and international colleague Javier Mascherano summed it up succinctly when he said that “Messi controls the game, where others are controlled by the game.”

Pablo Barrientos, meanwhile, was in action for San Lorenzo in a Copa Libertadores tie away to Sao Paulo of Brazil.  After spells in Russia and Italy, Barrientos moved back to his first professional club in the middle of last year, in time for the run in of the triumphant Libertadores campaign, when he made substitute appearances in both legs of the semi and the first leg of the final.  Defending the title, though, always looked harder than winning it, especially as San Lorenzo are in the toughest group in the field, together with two Brazilian giants.  Corinthians, off to a flying start, would seem to have assured themselves of one of the places in the knock out round – leaving the other for San Lorenzo and Sao Paulo.

The two sides met in Brazil last Wednesday, just a few hours after the Messi show on the other side of the Atlantic.  San Lorenzo went with a cautious strategy, but were even in sight of going home with a win as Sao Paulo strained to break the deadlock and left themselves open to the counter-attack.  Their best chance to snatch the points fell late on to Barrientos – but he could not get enough power behind his shot and Rogerio Ceni made the save.

The night, though, was to get worse for the man who once wore the number ten shirt ahead of Lionel Messi.  In the last minute Barrientos failed to track a run from Sao Paulo midfielder Michel Bastos, who met a cross with a far post header that won the game for the hosts – and provided a reminder that hierarchies in youth football are not written in stone.

Trying in vain to overturn hierarchies in South America are Venezuelan clubs, who have got off to a horrific start in this year’s Libertadores.  Deportivo Tachira’s qualifying round elimination of Paraguay’s Cerro Porteno has proved something of a false dawn.

So far, Tachira, Mineros and Zamora have played 11 games in the competition, accumulating 3 draws and 8 defeats, scoring 8 goals and conceding an alarming 30.  There have been times when the scorelines have been harsh – last Thursday, for example, Mineros outplayed reigning Brazilian champions Cruzeiro but still went down to a 2-0 defeat (see video below).  In general, though, the fate of the Venezuelan representatives sheds light on the difficulties of launching a league in a globalized context.

Venezuela may be traditionally more associated with baseball and beauty contests, but there was always a latent appreciation of football – which came to the surface in the early years of this century when the national team started winning some games.

On the back of this Venezuela invested heavily in stadiums, building some impressive new grounds to stage the 2007 Copa America, and extended the first division to 18 teams.  There was, though, an inherent contradiction in the process.  It was the national team that had fostered this interest.  But at the very moment that the presence of the stars of the national team would have been a boom for the league, they were no longer around.  Their exploits for Venezuela had placed them in the shop window, and they had been picked up by clubs elsewhere in South America or in Europa.  This may have been good news for the national team, but it drained the domestic league of quality at a key juncture.

This has been reflected in the fortunes of Venezuelan clubs in the Libertadores.  When Tachira reached the quarter finals in 2004 some saw it as a breakthrough.  Since then, however, there have only been two times when a Venezuelan team has managed to make it out of the group phase.  Both times this was Caracas, who reached the second round in 2007 and the quarter finals two years later.  They have subsequently slipped back, and no strong club has emerged to replace them.  With not a single win between them, this year’s trio of Tachira, Mineros and Zamora have very little chance of reversing the trend.