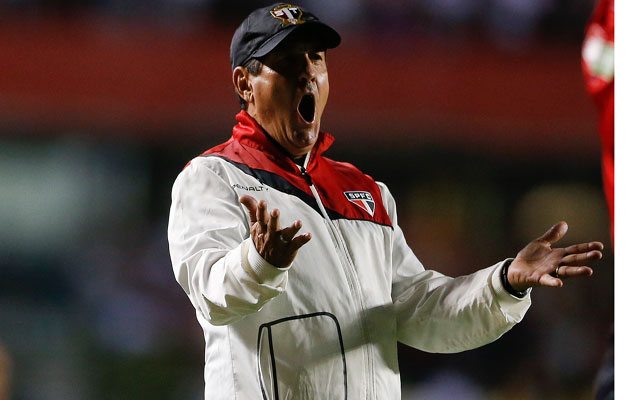 Something new and interesting has been happening at Flamengo of Rio, Brazil’s most popular club.  Traditionally Flamengo are associated with populist grandstanding and administrative chaos – but in the low profile presidency of Eduardo Bandeira, things have been done somewhat differently.  Priority has been given to whipping the club’s finances into shape.  Results on the field have suffered, but the supporters appear to have understood.  In 2014 Flamengo flirted with relegation before finishing 10th.  Last year they hinted at something better only to slump to 12th – and all without the terrace revolt that would normally accompany these results.  Indeed, Bandeira has been re-elected.

But the fans will not wait for ever.  2016 is a key year, then, the moment when Flamengo will expect to be competitive once more.   And they have made an intriguing choice of coach for the challenges ahead – because the question has to be asked; who is Muricy Ramalho?

It might seem a bizarre doubt.  At the age of 60, Ramalho is one of Brazil’s most experienced and successful coaches.  He won the Brazilian title with Sao Paulo in 2006, 07 and 08, turned down the Brazil job after the 2010 World Cup and finally broke his Libertadores duck the following year, winning South America’s premier club competition with Santos.

But later that year, and as a consequence of the Libertadores triumph, came the defeat that may well have changed everything.

Santos lived the South American dream of preparing for the Club World Cup.  But it turned into a horror show.  In the final Barcelona swept Santos aside.  The Catalans were superior by a margin far greater than the 4-0 scoreline.  It was a crushing blow for a coach who had spent months looking forward to this match – and to make matters worse, and the manner of the defeat made it even worse.  Brazil’s 7-1 capitulation to Germany in the 2014 World Cup semi final was, above all, an emotional one.  But the Santos slaughter was more tactical and conceptual, one which seemed to point out the ways in which Brazilian football had gone wrong, and one which undermined everything that Ramalho had built his coaching career around.

“If you want to see a spectacle, go to the theatre.”  It was one of Ramalho’s favourite lines.  He affected a bluff, no nonsense, almost philistine approach, constantly extolling the virtues of his own hard work.  A word was invented for the way that his teams played – ‘Muricy-ball.’  It meant selecting a big, strong side, that would grind out results, advancing set piece by set piece up the field until they could throw in a free kick or corner into the penalty area for the giants to attack.  It was an uber-version of the direction that Brazilian football had taken; the obsession with the physical development of the game, the loss of aesthetic criteria and a lack of faith in passing the ball.    Titles could no longer be won by possession-based teams filled with little midfielders.

Clearly no one told this to Barcelona and then coach Pep Guardiola – who stuck in the stiletto after the match, saying that his team treated the ball the way that his grandparents told him that Brazil used to do.  Ramalho, meanwhile, had endured a torrid 90 minutes.  There was no evidence of his self-proclaimed hard work, as Lionel Messi and company danced time and time again through his team’s defensive line.  Ramalho squirmed on the touchline, his body language revealing that he would rather be anywhere else.  “We were beaten,” said Santos president Luis Alvaro Ribeiro, “by a type of football that we didn’t even know existed.”  It was a declaration of the incompetence of his coach to operate at that kind of level – after all, Ramalho had had months to study his opponent.

Muricy Ramalho has since been making up for lost time.  Out of work since leaving Sao Paulo early last April, he made a visit to Barcelona and had warm praise for the club’s commitment to a model of play.  He now has the chance to start something similar at Flamengo.  But what will that model be?  It was clear that the thrashing at the hands of Barcelona had turned some keys in his mind.  Afterwards his teams, both at Santos and Sao Paulo, put more emphasis on a possession game.  Now he has been out of the firing line for a few months, and has had time to think things over.  What does the 2016 model Muricy Ramalho really believe in?  A coach always talks through this team – so we are about to find out who the 60 year old Ramalho really is.