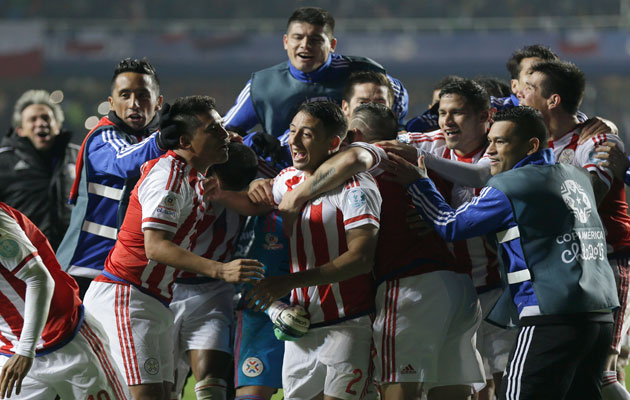 After the phoney war of the group stage, the quarter finals of the Copa America picked up the pace.  There was drama and intensity, and controversy too.  The 2015 Copa had always been set up in the hope that it would climax in a final between hosts Chile and either Brazil or Argentina.  This all went to plan in the first phase, as they all won their groups and so avoided each other in the quarter finals – but there, in the final match, the ever resilient Paraguayans showed that they had not been paying much attention to the script. 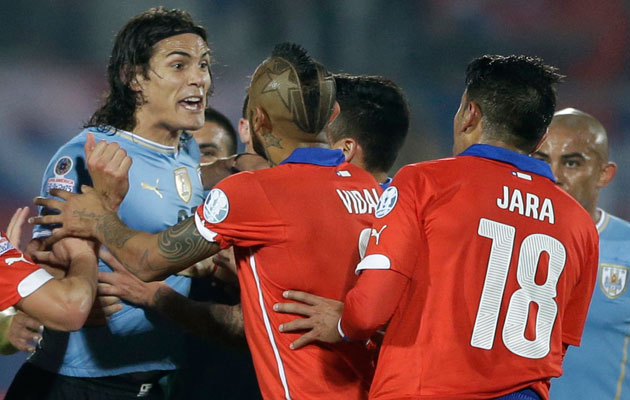 The opening quarter final in Santiago was everything it was expected to be, and a little more.  Once they had settled, Chile pressed remorselessly against an opponent steeped in dogged defence, and looking to pose the occasional threat on the counter.  Chile enjoyed around 80% of possession, but had problems turning this domination into clear chances.

This was even the case after Uruguay went down to 10 men soon after the hour.  Centre forward Edinson Cavani may not have been in the greatest state of mind – the previous day his father had been involved in a traffic accident where a motorcyclist died.  Already on a yellow, he reacted with a slap after Gonzalo Jara stuck a finger down his backside.  Cavani was sent off – and on the eve of the semi final, Jara was given a three match ban.

Chile badly needed more physical presence in the penalty area, and so on came Mauricio Pinilla.  It paid off with 10 minutes to go.  Pinilla and Arturo Vidal attacked a cross, forcing Fernando Muslera to punch out to the edge of the area.  Showing admirable calm Jorge Valdivia, one of the players of the tournament, rolled square for Mauricio Isla to fire home through a crowd of players.

There was no way back for Uruguay, especially when left back Jorge Fucile was extremely harshly sent off – leading to scenes where revolted Uruguayan players were pushing the linesman.  Already without Luis Suarez and now Cavani for the start of the World Cup qualifiers, Uruguay could yet face further sanctions. 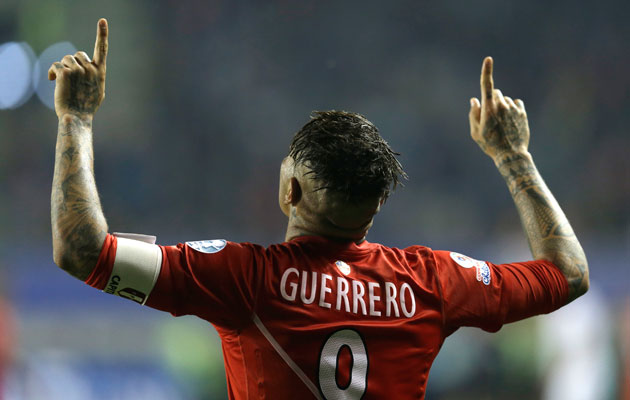 Bolivia switched to three centre backs for the surprise quarter final in Temuco.  They could have fielded eleven, but if they were unable to stop the cross at source, they were still unable to cope with Peru centre forward Paolo Guerrero.

The top scorer of the last Copa had been kept quiet so far in this one.  But from the first good Peruvian cross he rose above the defence to head Peru into the lead after 19 minutes – and he all but made the game safe for his side three minutes later.  Peru cleared a Bolivian free kick and broke quickly.  Attacking midfielder Cristian Cueva, enjoying a fine tournament, curled a wonderful pass behind the defensive line, and Guerrero stroked imperiously home.

Bolivia had done little in the competition, owing their qualification to a mad few minutes of defending by Ecuador in the group phase.  But now, deep in trouble, they produced their best performance of the Copa, straining to get back into the match.  Their most potent weapon was the set pieces of Martin Smedberg-Dalence, a 31 year old Swedish born player who coach Mauricio Soria has introduced into the national team.  To have any chance of getting back into the game, Bolivia badly needed the next goal.  Instead they gave one away.  Danny Bejerano played a suicidal ball across the face of his own defence, allowing Guerrero to latch on and complete his hat-trick. 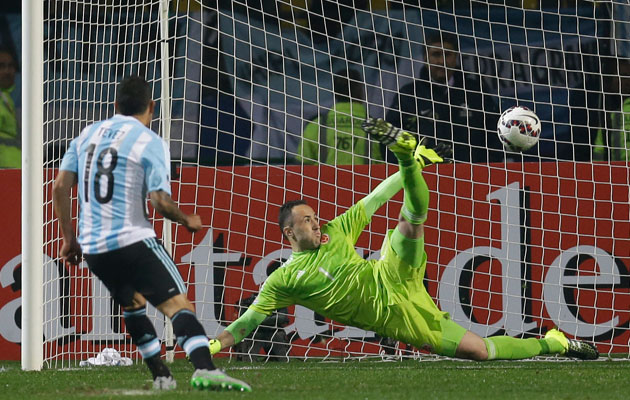 The heavyweight quarter final in Vina del Mar confirmed much about the performances of these two sides so far in the competition.  Once again Argentina could not turn domination into goals.  And once again Colombia were unable to elaborate play in the midfield.

Colombia coach Jose Pekerman took the big decision to leave captain Radamel Falcao Garcia on the bench.  But, surprisingly, he still went with two strikers.  Very quickly he realised his mistake.  His side, with specialist marker Carlos Sanchez suspended, were being over-run in midfield.  Lionel Messi. Angel Di Maria and Javier Pastore had the freedom of the park, Sergio Aguero posed a threat, Lucas Biglia was arriving as an element of surprise.  After 23 minutes Pekerman had seen enough, replacing a striker with an extra midfielder.  It made little difference.  Still Argentina did everything but score.  David Ospina in the Colombia goal produced an extraordinary double save to deny an Aguero shot and then a Messi header.

The second half was a little more even, with Colombia occasionally suggesting danger on the break.  But there was a late Argentine onslaught, with Ever Banega clipping the bar, and a Nicolas Otamendi volley from a corner hitting the far post and rolling along the line.  There was time for substitute Carlos Tevez to have a shot cleared off the line – and he was to have the final say when it went to penalties.

Four years ago his miss in the Copa quarter final shoot out against Uruguay meant that Argentina were eliminated.  It did not look as if there would be redemption for him this time.  He did not figure in Argentina’s first six penalty takers.  But both Biglia and Marcos Rojo shot wide when scoring would have taken Argentina through to the semis.  Jeison Murillo, so impressive at centre back for Colombia, sent his penalty high into the night.  And finally Tevez stepped up to fire home and achieve a little bit of redemption. 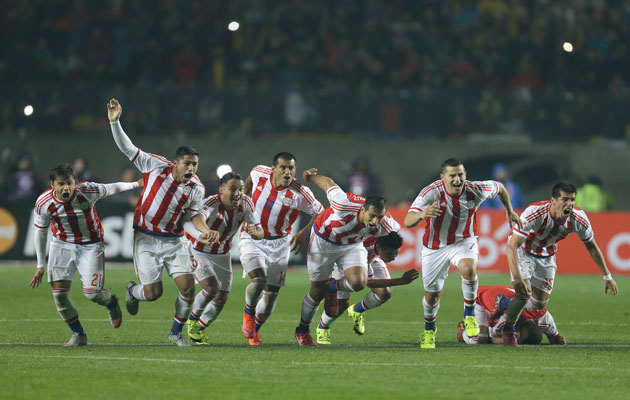 The Copa finally came to the southern city of Concepcion, where just as four years ago Paraguay knocked Brazil out on penalties in the quarter finals.

That looked an unlikely outcome when Brazil took an early lead with a wonderfully constructed goal, a move that started on the left, stretched the opposing defence by switching to the other flank and ended off with Robinho sweeping home a cross from Daniel Alves.

But it was almost the only thing of note which Brazil managed in the game.  A goal up, they sat back and waited for the opportunity to kill off the game on the counter attack.  But it was here that Paraguay coach Ramon Diaz worked so well.  He had drilled his defensive unit to eep close to the midfield and to push up aggressively, and so with pressure on the ball the vital pass was delayed and Brazil’s strikers tended to run offside.

It was also a move that brought his side higher up the pitch, and with Brazil’s passing out of defence so poor, Paraguay started to exert a stranglehold – but one with little penetration.  It was hard to see where a Paraguayan goal would come from – until, just as he had for PSG against Chelsea in the Champions League, Thiago Silva conceded a needless penalty by jumping with his arm above his head.  Hand ball was given, and Derlis Gonzalez fired home from the spot, going low to Jefferson’s right.

The athleticism of Brazil’s keeper clearly worried Diaz, who made attacking substitutions in the hope of winning the game in 90 minutes.  Instead, though, it went to penalties.  The Paraguayans made a point of blasting their kicks.  Brazil’s two left footed substitutes, Everton Ribeiro and Douglas Costa failed to hit the target, and the veteran Roque Santa Cruz had a chance to wrap it up for Paraguay.  But he shot miles over, and so it was left to Gonzalez, facing Jefferson for the second time.  On this occasion he went to the keeper’s left, his shot was high and true and Paraguay were through to face Argentina in the semi finals.