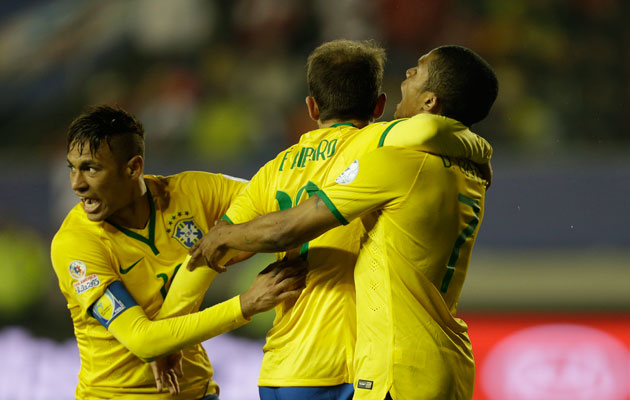 The strength in depth of contemporary South American football has been a feature of an intriguing, sometimes utterly enthralling first round of matches in the Copa America.

Going into their respective clashes with Argentina and Brazil, Paraguay and Peru looked weak and dangerously under-cooked, with new coaches still finding their feet in the role.  Indeed, Paraguay looked likely to be on the end of a cricket score at half time, but amazingly roared back to draw 2-2 with Argentina.

Peru, meanwhile, showed some pleasing passages of controlled possession and the odd moment of threat against Brazil, only to go down cruelly 2-1 to a piece of Neymar-inspired genius in stoppage time.

And Venezuela went even better;  with centre back Andres Tunez producing a man of the match display and Salomon Rondon carrying the fight up front, they beat Colombia 1-0.  It may have come from a tame goalless draw, but Bolivia are pleased to have a point on the board after their opened with Mexico.

Hindsight is indeed 20/20.  Chile’s opening night 2-0 win over Ecuador seemed at the time like a somewhat nervy affair, its defects to be attributed to first night nerves.  In retrospect, though, Chile come out of the first round of matches in a stronger position than any of their other favourites – not least because, on paper at least, they would seem to have the most straightforward remaining group fixtures (Mexico tonight and Bolivia on Friday).

There are meetings over the next couple of days between the other heavyweights – ad both Argentina v Uruguay (Tuesday) and Wednesday’s clash between Brazil and Colombia look all the more interesting after the opening round.

Argentina’s second half collapse against Paraguay was astonishing from such an experienced side.  True, they had enough chances on the counter-attack to have killed the game off with ease.  But their defensive confusion once Paraguay switched to two strikers was hard to explain.  The back line does seem vulnerable against pace – how might they cope on Tuesday with the movement and versatility of Diego Rolan, Uruguay’s brightest spark in a laboured 1-0 win over Jamaica?  How much has Argentina’s confidence been shaken by that second half?  And how will coach Gerardo Martino react after his much criticised substitutions?

The introduction of Carlos Tevez and Gonzalo Higuain seemed to have no logic apart from a need to keep big name players happy.  Bringing on the pair took speed away from Argentina’s counter-attack without giving the side any extra midfield control.  Uruguay, three points already in the bag, will relish the fact that they will not need to take the initiative in the game.

Colombia, though, might feel differently about Wednesday’s meeting with Brazil.  Jose Pekerman’s men gave an awful performance against Venezuela, in what was not the coach’s finest hour.  A central midfield duo of Edwin Valencia and Carlos Sanchez have very little constructive to offer, and Colombia’s football came nowhere near the flow usually associated with Pekerman’s sides.  How can he rethink?  The talented Edwin Cardona is surely not dynamic enough to play as one of a central pair against Brazil.  Will Pekerman go with a five man midfield and risk leaving Radamel Falcao Garcia up front on his own?

On the other hand, how will Brazil deal with James Rodriguez?  The absence through injury of holding midfielder Luiz Gustavo was clearly felt on Sunday, when Peru were able to get a considerable foothold in the game.  Luiz Gustavo was also missing in last year’s fiery World Cup quarter final, when Fernandinho dealt with Rodriguez by kicking him.  There could well be a need for a strong referee in this one, with all the memories of what happened a year ago, when Neymar suffered his injury.  Now Brazil’s captain, Neymar is if anything even more important to his team than he was in 2014.

There have been some momentous events off the field, as well.  Paraguay’s Congress decided to strip the CONMEBOL building, on the outskirts of Asuncion, of its diplomatic immunity.  And South America’s prosecutors have made a joint request to the US authorities for access to information on criminal activities unearthed by the FBI, so that local investigations can be furthered.

In what was surely a wise move, there were no speeches by political or football authorities during the Copa America opening ceremony.