Every year since the Bosman ruling of 1995, people have made the same prediction that this summer’s transfer market will see the last of the big spenders. Things can’t possibly carry on, but they do.

The trend from the January 2013 transfer window was less money being spent in the cash-strapped economies of Italy, Spain and Portugal, but continued spending in Germany, England and France, where Paris Saint-Germain have added a new dimension to the marketplace.

A new north-south divide has emerged in Europe, with Russia as a potential new source of big-money deals. There are obvious exceptions – Barcelona and Real Madrid will continue to spend heavily – but Mediterranean clubs are increasingly looking to South America.

Other factors will also determine what deals are done. This summer could see a succession of major coaching changes. In addition to the arrival of Pep Guardiola at Bayern Munich, there could be new coaches at Real Madrid, Manchester City, PSG and Chelsea – the four biggest-spending clubs of recent years.

City and Chelsea may rein in their spending this summer as they try to comply with UEFA’s Financial Fairplay regulations. But increased TV money means that, overall, the Premier League clubs have more to spend than ever before.

There are unknown factors, such as Champions League placings, which could affect Gareth Bale’s future at Tottenham Hotspur, and the proclamations of Alex Ferguson, who has given his “word” that Wayne Rooney will be at Manchester United next season. Ferguson made similar promises on David Beckham, Roy Keane and Cristiano Ronaldo. On speculation that Real Madrid were preparing to bid for Ronaldo in 2009, he said “I wouldn’t sell them a virus”. Weeks later Ronaldo moved for a world-record fee.

The £80million from the sale of Ronaldo has been burning a hole in United’s pocket ever since, and remains highest-ever transfer fee. It’s highly unlikely that a new record will be set this summer. But stranger things have happened. 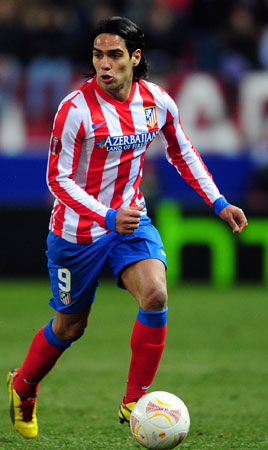 Only the crème de la crème of European football will be able to afford the huge numbers required to bring in the Colombian goal machine. With a ¤60million buy-out clause in his present contract with the Spanish side and the ¤15m a year that he will cost in wages and taxes, it would appear that the battle for his signature is between Chelsea, Manchester City, Paris Saint-Germain and Real Madrid.

While Chelsea will fancy their chances – and could always offer to throw in former Atletico hero Fernando Torres as part of any deal – the whole situation is complicated by Falcao’s contract. At present, Atletico own 80 per cent of his registration, while the other 20 per cent is controlled by agent Jorge Mendes.

What to believe? The striker’s expressions of loyalty to the reigning Premier League champions or the incessant rumours in Spain that he wants to join Real Madrid or Barcelona?

Never quite able to fulfil his huge potential at Real, the French striker could, says Spanish journal AS, be used as bait in a deal to recruit Napoli’s star goalgetter Edinson Cavani.

Spanish reports claim the Barcelona defensive midfielder is on the radar of the star collectors at PSG. Barca, however, are sure to want to hold onto one of their home-grown standard-bearers.

The battle for the Uruguayan hot shot could boil down to a Real Madrid versus Manchester City clash, with the winning bid sure to be well over ¤60m.

Unfortunately for the Argentinian wide man, this has not been the most consistent of seasons and he is likely to exit the Bernabeu stage-left in June, destination PSG or Manchester United.

Frustrated by his lack of starts in the Premier League, the Bosnian striker is desperate to move on – perhaps to his old Bundesliga patch, where he used to star for Wolfsburg, or Serie A.

His hopes of remaining Bayern’s first-choice striker crushed by injury and the form of stand-in Mario Mandzukic, the Germany international may decide to cut and run this summer.

Catalan paper Sport has gone public with Barcelona’s softly-softly plans to bring in the stylish German central defender. He did, however, extend his contract until 2017 last summer.

Now that the Polish striker has made it clear he will not renew his 2014-dated contract, Dortmund must sell in the next transfer window or let him sign for Bayern Munich on a Bosman next year.

The Portuguese star has felt unloved at times in Madrid this season. Paris Saint-Germain would happily set a new world record fee, especially if Jose Mourinho moves to France.

His exclusion from United’s starting line-up against Real Madrid at Old Trafford in the Champions League prompted talk of a summer exit. Few clubs, however, could afford his wages.

The absence of Champions League football may encourage him to turn to one of his numerous suitors. Interestingly, his agent Pere Guardiola is the brother of new Bayern Munich boss Pep…

Turin daily Tuttosport has been told by an inside source at Juve that the hard-tackling Italy defender is all set for a move to Paris Saint-Germain, who have offered him a three-year deal worth €5million a season.

Less and less a fixture at Real this season, the Argentina marksman remains hot property in the international market and has been courted by the likes of Manchester City, PSG – he was born in France – and Juventus.

With Chelsea holding out over the offer of a contract extension to the England midfielder, whose current deal expires this summer, Major League Soccer would love to hire him – but family ties and international ambitions may keep him in London.

Porto have bought out the private investors who owned part of his contract, smoothing the way for a summer exit.

The Portuguese winger’s contract is up next season but talks have stalled on a new deal. Juventus are keen, but he could be used as bait to lure Rodriguez from Porto.

A player for whom the term “enfant terrible” could have been invented, the French midfielder’s sloppy play this term has had his coach Roberto Mancini pulling his hair out. PSG are plotting his escape route.

A favourite of Chelsea owner Roman Abramovich, despite a dramatic loss of form since his £50m move from Liverpool in 2011. Will Chelsea’s new manager (whoever that may be) have the courage to move him on?

Following the keeper’s refusal to prolong his contract, which concludes in 2014, Barca could put him in the shop window.

A January 2013 target for Arsenal, who may come back with an improved offer in the summer.