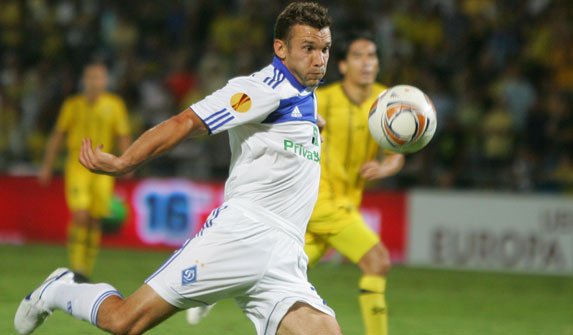 World Soccer: How surprised are you to still be playing for Ukraine at this late stage of your career?

Andriy Shevchenko: It is of great pride for me because playing in the national team at the highest level at my age is not easy. I am happily surprised at myself, too, because I did not think I would still be playing. I’ve always loved football and I’m still loving it. I owe everything to football, really. It has been my whole life and it will continue to be in the future, I hope. I’m happy and still have the enthusiasm of a kid who continues to chase his dream.

What will it mean to you to play in Euro 2012 in your home country?

It’s a dream of mine and for my generation, but also a dream of a young country which is still on the road to becoming a great, modern democracy. Sport, as so often happens, comes before the politics of governments and diplomacy, and achieves things that the authorities and institutions cannot. Football is the people’s passion that brings so many different people together.

Ukraine has never hosted a major sporting event like the European Championship. Of course, we still have many problems, but we have been making great efforts to be prepared. I’m sure the big event will offer to Europe a great young country that wants to emerge and grow, to open itself up to other people. For me, the Euros will be my last great football adventure. It will be a fantastic feeling playing at home. I could not ask for a better way to close my career.

How much of an impact can Ukraine’s fans make at this tournament?

Ukrainians have always been crazy about football, even before the end of the great Soviet era. Supporters of Ukraine, however, are different from those in western Europe because they do not participate in the game like in Italy,Spain, Greece or in other Mediterranean countries. They do not sing or clap all the time for a good tackle or a corner kick or a foul. They have a different approach to the game and to other sporting events. It does not mean that they aren’t warm supporters though, and I am pretty sure they will be our 12th man on the pitch.

Is it fair to say you are underdogs?

Unfortunately the draw has not favoured us because France, England and Sweden are very strong teams with a great tradition in European football. But being the underdog is OK for us. It is better to travel with the lights off, especially when you’re the co-host. We have a good team, a pretty deep squad, but maybe we do not have a generation of top players like we did a few years ago. That said, we have a good mix of young talent and veterans. Our coach, Oleg Blokhin, is a world-class former footballer and I’m glad he’s back after four years to lead the national team because he was our greatest player, a true symbol for the country in difficult times. We trust in him and he trusts in us.

What do you make of your three group opponents?

Maybe Sweden are not so strong in defence and in midfield, but they will still be a candidate for a semi-finals berth. They also have nothing to lose. No stress, no pressure. And with Zlatan Ibrahimovic in the squad everything is possible.

Laurent Blanc has done a great job in his first year at the helm of France and I think they will reap the fruits of that this summer. Maybe France are not ready yet to win, but I’m pretty sure they will be among the main contenders. The most dangerous thing about France is they have plenty of talent, especially in the front line with Karim Benzema, Samir Nasri, Franck Ribery and Jeremy Menez.

As for England, they have so many top players and maybe this is the last great opportunity to win something with the golden generation of Frank Lampard, John Terry, Ashley Cole – all of them my former team-mates at Chelsea – and also Steven Gerrard.

Who is your tip to win the competition if Ukraine do not make it all the way?

Germany is my favourite right now, along with Spain and Holland. Spain are great, although they are perhaps less brilliant than they were one or two seasons ago. Germany are probably the best in the world now as they have so many talented players and a bright, young and multi-ethnic team. They can win it. Poland could be a possible surprise. They play at home too and they have many young, skilful players. If they start well, with the right enthusiasm, they could go a long way; maybe not winning the tournament, but getting to the last four. It would be a great success for them. As for us, the semi-finals would be a dream.

Which three players are most likely to be in the race to win the “Most Valuable Player” award?

Cristiano Ronaldo and Wayne Rooney, for sure, if England progress and he manages to play a few more games in the latter stages. And then there is my friend and former Milan team-mate Andrea Pirlo, who at the 2006 World Cup was fantastic. He has had an extraordinary career and deserves to win another great major trophy. I hope he’ll win the Ballon d’Or too.