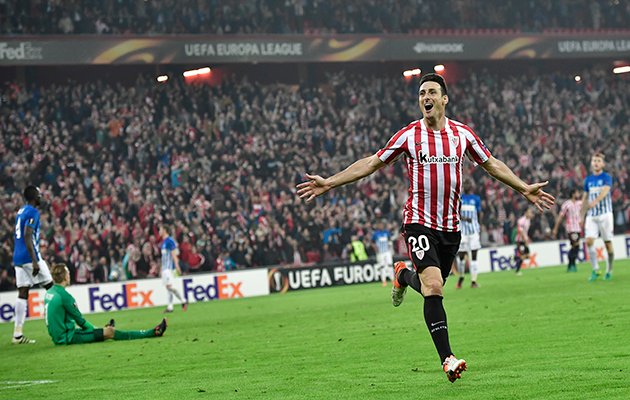 “One day I’ll be able to say: ‘we were there that day’,” the Athletic Club manager Ernesto Valverde said. There that night at San Mamés when Aritz Aduriz got five and Athletic beat Genk 5-3. That made him the first Athletic player to score five goals since Fidel Ugarte, forty-nine years ago; the first Spaniard player to score five in Europe since Zaldua and only the second ever. Zaldua’s five came half a century ago, back before Aduriz was born. Just not as long before he was born as you might imagine.

In February, Aduriz will be 36. Which is striking enough as it is. But here’s the thing: it’s not that he’s hanging on, playing out his final years; it is that he is getting better. He’s a man whose goals per game ratio has doubled since his thirtieth birthday and who last year signed a contract extension at Athletic – not out of loyalty or gratitude, but out of need. There’s genuinely no one like him. “We’re lucky to have him,” Valverde said last night, and he’s right.

To which, incidentally, Aduriz responded: “and one day I’ll say I was lucky to be coached by him.”

Runner up at the national cross-country skiing championships when he was a kid, the son of mountain-climbing parents who didn’t much like football, Aduriz started his career at Athletic, left, came back again, left again, and came back again. He never wanted to go; it was always an obligation, their choice, not his. And when he returned for the last time, some felt, sadly, that it came too late. It was the end. Actually, it wasn’t: it was the beginning.

He was always good, but never this good. It’s like his career has gone back-to-front. Now, he should be easing towards retirement, slowing down; instead, he is accelerating.

“Age is just a number,” he says. Speaking of numbers: when he returned to Athletic for the third time in 2012, aged 31, Aduriz had never scored more than twelve league goals in a first division season. Since then, his figures read: 14, 16, 18, 20. Better still, they read: 18, 18, 26 and 36 in all competitions. Top scorer in last season’s Europa League, he is already top scorer in this year’s competition too, thanks to his five last night.

“Well,” he said, “three of them were penalties … with time, I’ll realise what this means.”

“I’m nothing without the team,” he added. “I finish off the moves, but they make them.”

Maybe, but no one finishes like he does. Not at his age. He’s better than anyone else, including younger strikers. Including the younger Aduriz. This was just another reminder, a historic night that won’t be forgotten. One day, they’ll look back on it and say: “we were there”. So, as ever, was he – fourteen years after his debut for Athletic. 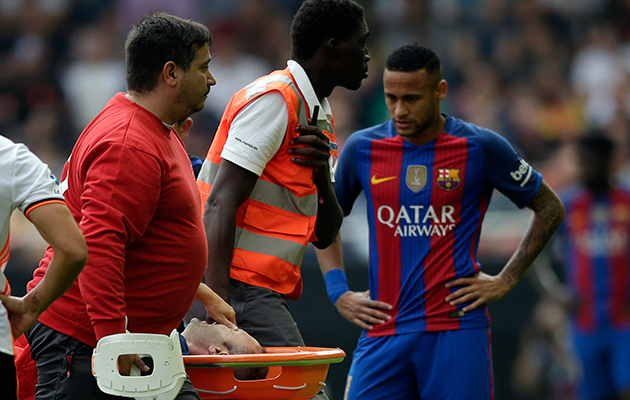 Barcelona have missed the controlling presence of Andres Iniesta, seen here being carried off against Valencia.

“You’ve helped me a lot but I hope I never see you again,” Andres Iniesta said. The ‘you’ in question was the knee brace that he has had to wear since he suffered a ligament injury against Valencia, thrown to the floor and photographed, another step in his recovery. Scans showed the injury was not as bad as first feared – the ligament was not torn – but there’s still some time to go until his return. The hope is that he makes it for the clásico, but that may come to soon.

For Barcelona’s fans, and their players, it can’t come soon enough. Beaten by City, they’ve struggled this season; they’re not exercising the control that they once did. Even in victory, there is not the security there was. And Iniesta is vital – something reflected in Luis Enrique’s determination to protect him wherever possible. This weekend, especially: on Sunday night, amidst debate about what’s happening to them, Barcelona visit the Sanchez Pizjuán to face Sevilla. 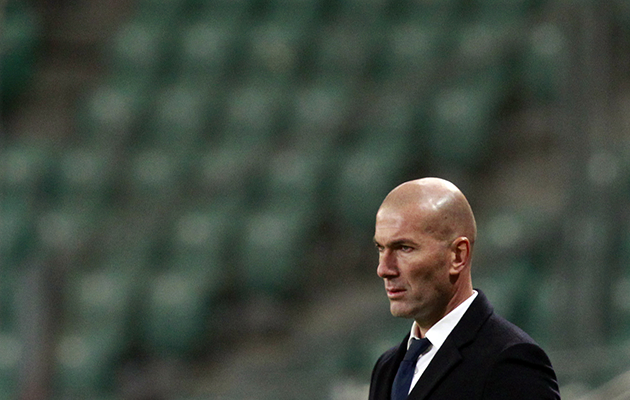 Zinedine Zidane watches on in front of empty stands as Real Madrid are held by Legia Warsaw.

Zinedine Zidane kept saying that the BBC – Bale, Benzema, Cristiano – was non-negotiable. That they would always play when fit. But then Álvaro Morata started scoring, and scoring, and scoring. Four games running he found the net, usually off the bench. Pressure built, his case grew stronger. It was time to play him. So Zidane did: with the BBC. All four of them started.

Sure, it was a bit forced, a 4-2-4 that didn’t really suit anyone. But no matter. It was only Legia Warsaw, after all. No Polish team had even been in the Champions League for two decades and Madrid had hammered them 5-1 at the Bernabéu. Oh, and there would be no fans, either.

It didn’t go well, despite Madrid taking an early 2-0 lead in an empty stadium, played behind closed doors. Legia came back to make it 2-2, then took a 3-2 lead before Kovacic made it 3-3. Lucas Vázquez hit the bar in the last minute, but Madrid – for all the shots – could not really say they were unlucky. In the last half an hour, at least, Legia were not hanging on: they were going for more, going for Madrid.

“At the final whistle I was not satisfied: we could have won it,” their coach, Jacek Magiera, said. “But then you think about the fact that you have got a draw with Madrid.”