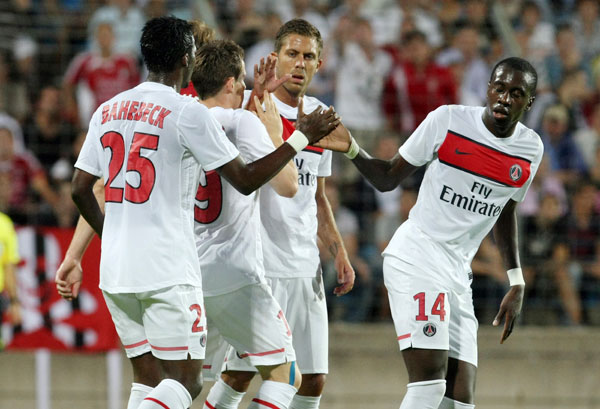 Jeremy Menez and Blaise Matuidi on the far right.

Jeremy Menez and Blaise Matuidi have plenty in common. Current French internationals, they were born within a month of each other in the spring of 1987 and both brought up in the suburbs of Paris. They were both first selected for Les Blues for a friendly against Norway in August 2010 and both signed for Paris Saint-Germain, flush with the noveaux riches of Nasser Al-Khelaifi’s Qatar Investment Authority, on 25th July 2011 and frequent their midfield. As it stands, they also both also look set to leave the club when their contracts expire in the summer, making them the most sought-after free agents in the game.

Matuidi is a regular starter, while Menez has been relegated to the fringes of the side by the purchases of Javier Pastore, Marco Veratti and Lucas. A prodigiously talented youngster, the career of Menez may have taken a very different path had Sir Alex Ferguson been successful in his pursuit of the then 15-year-old. Having travelled to Manchester and held talks with Ferguson, Menez decided to stay with Sochaux, where he became Ligue 1’s youngest ever player and the youngest to ever score a hat-trick.

Two-footed with blistering pace, Menez has never quite fulfilled his undoubted potential or managed to settle at a club for very long. Like many of his peers from ‘Generation 1987,’ containing the likes of Samir Nasri, Karim Benzema and Hatem Ben-Arfa, he has proved to be prickly character. He spent two seasons at Monaco before joining Roma, where he was consistently substituted. A particularly effort-free cameo showing against Cagliari in January 2010 resulted in him being castigated by manager Claudio Ranieri and targeted by Ultra’s, who in turn smashed up his car. Ranieri’s successor, Vicenzo Montella, also had a training ground altercation with Menez regarding his poor application which eventually resulted in his move to Paris.

He thrived in his first season under the tutelage of Antoine Kombouare and Carlo Ancelotti, recording a career high seven goals and 12 assists, but his appearances and influence have since dwindled. He also fell out with Ancelotti earlier in the year and publically exclaimed: “I need to feel I’m trusted and the day I no longer feel that, a solution will have to be found.” His departure is certain, whether PSG plan to recoup any of their investment in January or instead allow to leave for nothing in the summer. High maintenance he may be, but he does have ‘all the tools,’ so it is unsurprising that Brendan Rodgers has already expressed an interest in taking him to Anfield.

Matuidi is an altogether different proposition. Powerfully built akin to Michael Essien, he remains integral to Laurent Blanc’s current side and Al-Khelaifi has previously stated that he has no intention of letting him go. “He will never leave PSG, I love him. He is a warrior, and is never arrogant. He always wants to progress and that is something awesome and unique. He is one of the best players in our squad, and indeed, all of France.”

But he is yet to agree a new deal and can agree a pre-contract with another club in January. A deal is believed to be in place but his controversial union with high-profile agent Mino Raiola has resulted in legal action brought against him by the man he replaced. Until a verdict has been reached, an impasse remains and Raiola is sure to be casting his net far and wide in the meantime on behalf of his new client.

A Clairefontaine graduate, Matuidi signed professionally for Troyes in 2004 but their relegation in 2007 resulted in a move to Saint-Etienne. He was extensively scouted by Arsenal scout Giles Grimandi during the 2008-09 campaign, but the club decided against pursuing their interest. He joined PSG in 2011 as a direct replacement for Claude Makalele and his impressive, driving performances have suitably compensated for the retirement of one of French football’s finest players. He provides the defensive stability that allows Paris Saint-Germain’s wealth of attacking talent to flourish.

Negotiations on a new deal are ongoing, but Chelsea and Manchester City are lurking in the shadows in case an agreement fails to materialise. He is able to arrange a pre-contract deal with another club in a few weeks, so Matuidi has the upper hand and his employers are sure to become more apprehensive with every passing week.

With both players set for World Cup duty in the summer, it is likely that they will seek to clarify their respective situations before they depart for Brazil. The pursuit of 2014’s best bargains is already underway.