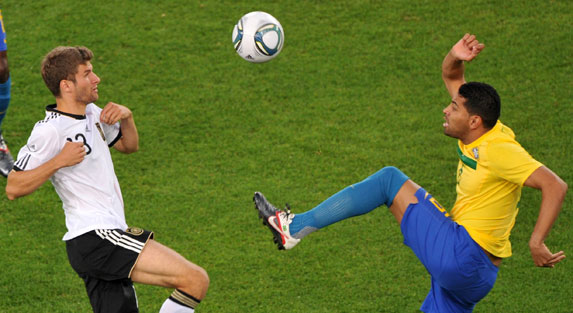 With national coach Mano Menezes coming under increasing pressure in the wake of the recent 3-2 defeat by Germany, and with current playmaker Paulo Henrique Ganso falling short of the huge expectations created around him by the Brazilian media, the cry for an international recall for Ronaldinho is gaining volume.

“People are suddenly talking about Ronaldinho returning to the national team,” says his club coach at Flamengo, Vanderlei Luxemburgo. “But for me he has always been a player for the national team. If Ronaldinho wants it, he can have the Brazil no10 shirt, or any other. It’s up to him.”

At the end of July, the 31-year-old backed up Luxemburgo’s faith with a stunning performance in a league game against Santos.

With Neymar on one side and a rejuvenated Ronaldinho on the other, it was a clash full of potential – and which outdid all expectations, as Santos raced into a 3-0 lead before Flamengo hit back to win 5-4.

Neymar scored two astonishing goals, while Ronaldinho used all his guile to carry the day with a hat-trick.

It was a victory that established Flamengo as serious title contenders,  and a fit and motivated Ronaldinho as the tournament’s top scorer – which was an astonishing difference from the figure who waddled in a seemingly disinterested fashion through the first six months of the year.

The turning point might well have come in the middle of June. With two minutes remaining of a tame 1-1 draw against Botafogo, Luxemburgo hauled Ronaldinho off – apparently for the sole motive of allowing the crowd to boo him for another disappointing display.

Perhaps it turned a key in the player’s mind, but a positional change was also important. Ronaldinho has lost the burning acceleration of his peak years, so Luxemburgo has reacted by now playing him closer to goal, where he can get maximum return from his feints and shimmies. He is setting up chances with his passing and crosses, and he is adding penalty-area tap-in goals to his usual repertoire of free-kicks and shots following close-control dribbling.

He is also making clear his ambition to play in the 2014 World Cup – “I think I can make it, I’m feeling in good physical shape” – and his team-mates are talking about helping him achieve his objective.

And a chance to show what he can do is surely coming. In September, Brazil have two games against Argentina on non-FIFA dates in which only home-based players will be called up. It is hard to see how Menezes can overlook him.

Menezes took over a year ago with the central idea of weaning Brazil off an excessive dependence on the counter-attack. Both in order to have the home crowd onside in 2014, and facing the necessity of breaking down the packed defences that the next World Cup hosts will undoubtedly face, Menezes made a call for more midfield elaboration.

The evidence of the Copa America pointed to the conclusion that his team was very much a work in progress. Ganso struggled, and Brazil’s passing through the midfield was not sufficiently slick or effective.

One reading of August’s friendly with Germany is that, under pressure after the Copa, Menezes lost his nerve.

This could have been an important game in Ganso’s development, his first European test. But he was left on the bench, only brought on after Brazil went two goals down.

Menezes confessed that his team could not trade toe-to-toe with Germany – even though they were
not at full strength and barely out of pre-season. “We’re still finding it hard to organise an attacking move,” he said after the game. “We’re depending on individual dribble from one of our strikers. We’re not able to put together combinations as mechanically as the Germans are doing.”

It was a concern that he clearly carried into the game, because his side was built entirely for the counter-attack, in the hope of luring the German midfield forward and then surging into the space. Had Brazil scored first it might have worked – Alexandre Pato missed a clear chance when clean through against the goalkeeper – but once Germany got the first goal there was only one winner, and Menezes was gracious enough to concede that the victory was thoroughly deserved.

But, as ever with friendlies, the result is not the most important aspect. Far more relevant is the way that the game contributes to the development of the team. And in this case the alarming thing was the lack of confidence that Menezes seemed to show in the ideas he was proclaiming a year ago.

On his appointment Menezes was informed that early results would not count against him. Predecessor Dunga took an aged squad to last year’s World Cup. Rebuilding the team and implanting a new idea would obviously take time.

But in Brazil such patience is always relative. Rumblings of discontent can be heard, and Ronaldinho is not the only big name at Flamengo looking at a recall to the international scene.

A year ago Luxemburgo came across as yesterday’s man, wallowing in the relegation zone with an expensively assembled squad at Atletico Mineiro. But Ronaldinho’s rebirth has also been his. Winning this year’s Brazilian title, or next year’s Copa Libertadores, would leave Luxemburgo very well positioned to step in should Menezes continue to falter.

Over a decade ago Luxemburgo had an unhappy two-year stint in charge of Brazil, but the undoubted high point was winning the 1999 Copa America, with a young Ronaldinho acquiring his first taste of a senior international tournament.

Perhaps in lighter moments at Flamengo, the pair dream of working together 15 years later, when Brazil go in search of the big prize.