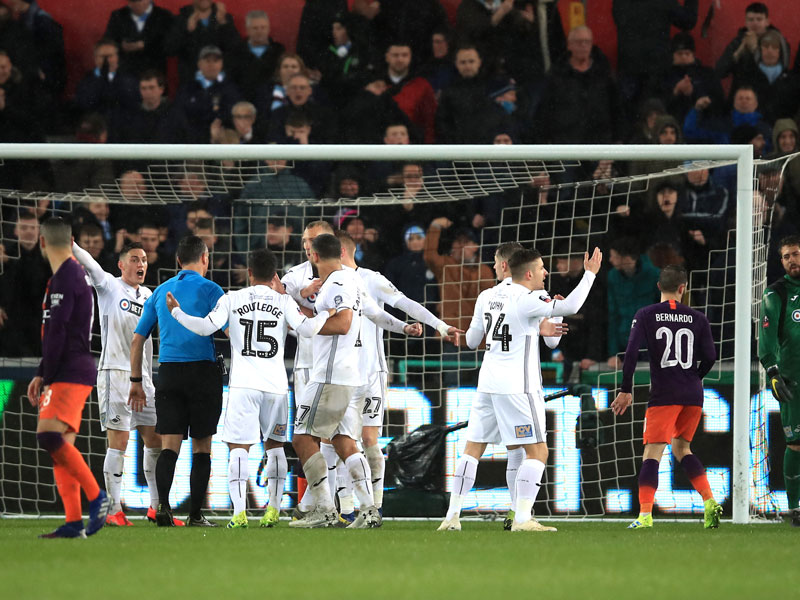 Sometimes football’s officialdom does baffling things. I am thinking now of our own, our English FA. FIFA and UEFA tend in general to be beyond logic and hope. But last weekend’s round of FA Cup ties was surely a prime example of such confusion.

Nowhere I feel can one find a more crass example than Swansea, where the home team, very much the Championship underdogs against the supposedly all conquering Manchester City, found themselves without the protection of VAR. They were defeated by a City team which surely in its current form and its position in the Premiership, should have had no need of the advantage it illegally gained through the lack of VAR.

It was manifestly absurd that the Football Association should have seen to it that if one or more clubs in the round had VAR, then so should all the rest. But Swansea did not and they suffered severely from that fact.

Let me recall certain things which crucially happened. And well may they say, while nobly refusing to make an official complaint, that they remain in the dark over the FA decision not to allow them to install VAR. This though their Liberty Stadium was perfectly well equipped to install VAR.

Even the fair-minded Manchester City coach Pep Guardiola could see no sense in this arbitrary decision.

So it was that after the Swans had gallantly gone into a 2-0 lead, two highly dubious second-half rulings went against them, enabling a far from dominant and impressive City to score twice, once from a contentious penalty and once from a highly dubious decision not to rule out a goal for offside. In blunt and brutal terms they were surely treated outrageously.

On and on grinds the aftermath to the horrific semi-final Hilllsborough tragedy. Now we have the hapless David Duckenfield, the senior copper who presided so disastrously over the game and caused the gate to be opened, being defended by his lawyer at the trial as being wholly innocent. Shameless, surely even if I suppose lawyers in such circumstances are said to make any defence they feel they can.

Their current decision flies in the face of all logic and reality. Yet I must repeat what I have been saying for such a long time, that he was to a degree a victim himself, thrown into the commanding job with no valid experience while the copper who had successfully ran the policing the previous year was ignored thanks to some nonsense about so-called horseplay among the men of his command.

The truth is, and there is superabundant verbal evidence to show it, that those terraces had long been suspect.