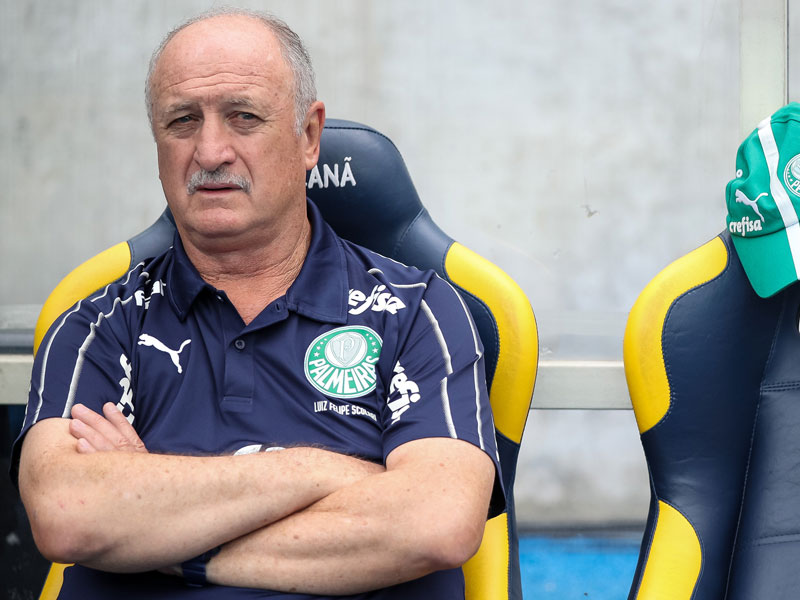 Some wins are worth much more than the points at stake.  There are games that stand out for reasons beyond the result – and one such could be Sunday’s clash in the Brazilian Championship, where Flamengo cruised to a 3-0 win over Palmeiras.

This is significant in terms of league placing. Approaching the half way stage it took Flamengo to the top of the table, and sent Palmeiras tumbling down to fifth. But it was much more than that. This was the meeting of Brazil’s wealthy big two; Flamengo with their colossal nationwide support, and Palmeiras with a wealthy sponsor plus a large fan base enthused with the club’s excellent new stadium. But it also came across as a clash of the new versus the old, with a resounding victory for the former.

Reigning champions Palmeiras are coached – for now – by Luiz Felipe Scolari. The quantity of titles on his CV are sufficient to highlight his competence. But it is hard to deny that he is a representative of a low risk, counter attack and set pieces model of play that has taken a stranglehold on the domestic Brazilian game in recent times – and which has not been to its benefit.

Last year, one by one, the Brazilian clubs were eliminated from the Copa Libertadores as a consequence of an over-cautious approach. Even with a financial advantage over their continental rivals they would drop deep, cover up and bide their time. It is essentially a reactive model of play, and it has been taken too far.

This year there has been a fascinating reaction, part of which is the decision of Flamengo to appoint Portuguese coach Jorge Jesus. He strode in after the Copa America with a proactive style of play. His team seek to defend high, attacking the half way line rather than retreating to their own penalty area, and throwing numbers forward to carry out fluid combinations close to the opposing goal.

His team often switch formations, and confused Palmeiras on Sunday with an early change from a 4-2-3-1 to a 4-4-2. This latter system is bringing out the best in the two strikers. One of the things that has hampered the career of the talented Gabriel Barbosa is that he is neither an old fashioned centre forward, nor is he a genuine winger. The trend for 4-3-3 or 4-2-3-1, then, has hit him hard. He does not really fit in. But a 4-4-2 suits him much better, giving him the freedom to drop or to roam across the attacking line  – and much the same applies to his strike partner Bruno Henrique, newly called up to the Brazil squad.

For a vital few minutes, Palmeiras were not able to close them down, and were well on the way to a beating.

It could well be that Brazilian sides have forgotten how to defend against twin strikers. A quarter of a century ago almost everyone in Brazil played 4-4-2. The defensive response, given the huge space lying in front of the defensive line, was effectively to play a pair of centre backs in front of the centre backs. These days, with the vast majority of teams fielding a lone striker, that has gone out of fashion.  Palmeiras simply could not cope with the fluidity of Gabriel and Bruno Henrique, and their link ups with attacking midfielders Everton Ribeiro and Giorgian De Arrascaeta. The game, billed as clash between two title heavyweights, was not remotely close.

True, this is a good time to face Palmeiras. Their wheels have come off. They went into the pause for the Copa America as the league leaders. Since the break their league form has been that of a relegation candidate.  And they have been knocked out of the domestic cup and – a huge blow – last Wednesday they failed to make the semi finals of the Libertadores. Morale is clearly low, and Scolari may struggle to hold on to his job.

But Sunday felt more than a routine win over an out of sorts opponent. It came across as a triumph for the new proactive desire, as a manifesto for a fresh bold approach. There is much the same from the side who trail Flamengo on goal difference – Santos, trained by the former Argentine national team boss Jorge Sampaoli.

Where Jorge Jesus has lots of money to spend, and has used to it build a formidable squad, Sampaoli is operating on a relative shoe string, and his performance so far in the Brazilian Championship is at least as impressive.

And so the table is topped by two teams coached by foreigners. Then again, there was a huge foreign influence – Uruguayan, Argentine, Hungarian – in the development of the game and in Brazil’s early World Cup wins.  By battling back at the excesses of cautious pragmatism, Jorge Jesus and Jorge Sampaoli are not just part of a foreign invasion. They are helping Brazilian football become more Brazilian.