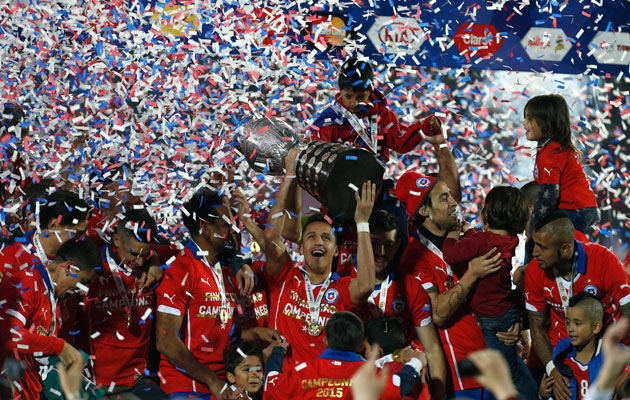 So perhaps next year’s Centenary Copa America will go ahead after all.

The tournament, supposedly to celebrate 100 years since the first Copa in 1916, and featuring the ten South American nations plus 6 from Concacaf, has been scheduled to take place in the USA next June.  But it has run into an obvious problem.  The ‘FIFA scandal’ at the end of May, with all those arrests in a Swiss hotel, could more accurately be described as a more localised affair, a tale of corruption involving TV rights in the Americas, south, central and north – the very terrain of the proposed tournament.

Unravelling all the legal aspects has not been easy.  But last week Conmebol, the South American federation, announced that it was ripping up its contract with Datisa, the TV company formed by a merger of all those firms whose name has come up in the connection with recent events.  An Executive Committee has been formed to take care of next year’s Copa, comprising two representatives each from Conmebol and Concacaf, and, crucially, one from US Soccer.  Their task is now to choose venues and sort out the organisational side of a tournament set to take place in just over seven months.

Conmebol issued a statement on Friday brimming with self-congratulation.  They will move ahead “under a totally new structure of tournament operations and finances,” and “this improved governance structure will bring more transparency to the event.”

What is yet to be clarified, however, is how they can bring more credibility to the event.
There is no doubt that the birth of the Copa America in 1916 is a development well worthy of celebration.  Held almost annually in its easy years, the Copa stimulated interest in the game and promoted a rapid rise in standards.  Indeed, a straight line can be drawn from the start of the Copa, the oldest continental competition around, and the birth of the World Cup just 14 years later.

But Conmebol’s desire to stage an event in the US reveals their true motives – rather than hold an adequate commemoration of South American footballing history, the main idea would seem to be to make money in the north.

It could backfire, though, because there is an obvious risk – that of teams turning up with understrength and experimental squads.

All ten South American nations were recently involved in the Copa America.  Half of them also played in the previous year’s World Cup.  For Brazil and Uruguay, who featured in the 2013 Confederations Cup, it would be a case of a third consecutive June/July with an international tournament.  Chile, the continent’s representatives in the 2017 Confederations Cup, would be in a similar situation.

There is a clear problem, then, of top players suffering from burn out.  Indeed, with the proposed Copa coming in the middle of the ultra-competitive 2018 World Cup qualifiers, South American teams would be foolish, or at least reckless, to burden their most important players with yet another tournament.  Peru, for example, have been considering the idea of taking an Under-23 squad to the Centenary Copa.  But how can a tournament possibly compete for attention with Euro 2016, due to take place around the same time, unless the star names are present?

It could be, then, that the region’s new improved management systems might be better employed finding a more rational way to celebrate such an important landmark in the game’s history.