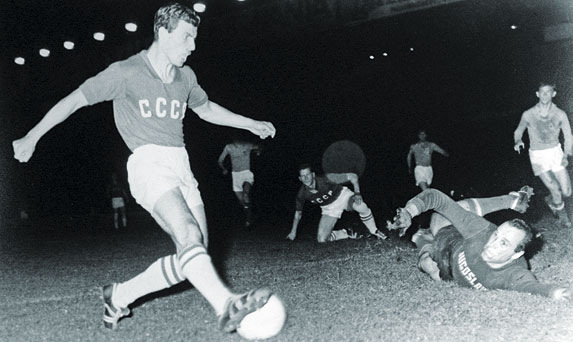 The first European Nations Cup, as it was originally known, was by no means a resounding success. Only 17 countries entered, with England, Italy and West Germany being among the absentees.

Spain were the early favourites and they thrashed Poland 7-2 on aggregate in the qualifying round, with two goals apiece from Luis Suarez and Alfredo Di Stefano. They were then drawn against the USSR in the quarter-finals, which were due to be played over home-and-away legs, but Spain’s dictatorial leader, General Franco, barred the Soviets from entering the country. The tie was therefore awarded to the Soviet Union by default and they travelled to France for the finals tournament.

France was an appropriate host of the first finals as it was a Frenchman, Henri Delaunay, who had originally proposed the idea of a European Championship to FIFA, back in 1927. However, the world governing body preferred to pursue its plan for a World Cup and Delaunay, who was UEFA’s first general secretary, died in 1955 before he could see his idea come to fruition.

France, who had beaten Austria 9-4 on aggregate in the quarter-finals, met Yugoslavia in the semis without Just Fontaine, top scorer at the 1958 World Cup, and playmaker Raymond Kopa, and led 4-2 with 15 minutes to play. But Yugoslavia scored three times in an amazing last quarter of an hour to reach the Final.

In the other semi, the USSR, led by legendary goalkeeper Lev Yashin, beat Czechoslovakia 3-0 in Marseille.

The Final, played at the Parc des Princes, was a tight affair, with Yashin in outstanding form. The match went to extra time and Viktor Ponedelnik snatched the winner late in the game.

General Franco refused to let Spain compete against the USSR in the quarter-finals due to the Soviet Union’s support of the Second Spanish Republic in the Spanish Civil War.

Spain’s withdrawal from the competition therefore left three communist countries in the finals tournament, along with hosts France.

There may have been less than 18,000 in the Parc des Princes to see the USSR win the first Final, but when they set out on the road to Paris – beating Hungary 3-1 in 1958 in the home leg of their first-round game – they were watched by 100,572 people at the Lenin Stadium in Moscow.

Ref is a knockout

English referee Arthur Ellis, who took charge of the Nations Cup Final at the Parc des Princes, also officiated in the first European Cup Final, at the same venue, in 1956.

After retiring from football, Ellis later found fame as a referee on the TV gameshow It’s a Knockout.