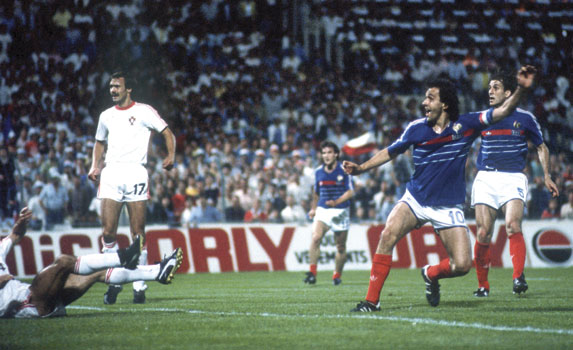 Platini, the undisputed player of the tournament, sees off Portugal in the semi-finals

Built around the sublime talent of midfielder Michel Platini, France were the outstanding international team of the early 1980s. They had come close to winning the 1982 World Cup, losing to West Germany in a semi-final penalty shoot-out, and were favourites to win the European title on home soil two years later.

For the first time UEFA’s entire membership of 33 had entered the competition. France, as hosts, qualified automatically, while the remaining 32 countries were organised into seven qualifying groups.

Belgium were comfortable winners of their group, three points ahead of Switzerland, but the other groups all went to the wire. Portugal finished one point clear of the USSR, while a similar margin saw Yugoslavia, Denmark and Romania finish in front of Wales, England and Sweden respectively.

The two other groups were settled on goal difference. West Germany scraped a 2-1 win over Albania in
their final game to edge out Northern Ireland, while Spain needed to beat Malta by 11 goals to be placed above Holland. Although they conceded an early goal in Seville, Spain recovered to score 12 – a result that forced UEFA to insist all last-round games took place simultaneously in the future.

At the finals, France were in devastating form, with Platini the orchestrator of a brilliant midfield that also contained Luis Fernandez, Jean Tigana and Alain Giresse. Platini scored seven goals in France’s three group games: the only goal in the 1-0 victory over Denmark, and then hat-tricks against Belgium (5-0) and Yugoslavia (3-2).

The Danes lost Allan Simonsen with a broken leg in the loss to France, but a 5-0 victory over Yugoslavia demonstrated that they were a rising force in the game and they finished second to qualify for the semi-finals.

The balance of power in the European game was shifting and this was exemplified by the failure of defending champions West Germany to make the last four. A disappointing German side drew their opening game with Portugal and then edged past Romania with a narrow 2-1 win.

They still needed a point from their game against Spain, who had only managed to draw their matches with Romania and Portugal. And after goalkeeper Toni Schumacher saved a penalty from Spain’s Francisco Carrasco, it looked like West Germany would get the necessary point. But, in injury time, Spain launched one final attack. Juan Senor’s cross from the right was left by Schumacher and his defenders, and Antonio Maceda headed home the winner.

The semi-final between France and Portugal proved to be a classic. Platini played an important part in the opening goal when he was fouled on the edge of the Portuguese penalty area and Jean-Francois Domergue’s free-kick was deflected by Joao Pinto into the net.

The French had a number of opportunities to extend their lead but failed to take them, and Portugal equalised through Rui Jordao midway through the second half. In extra time both goalkeepers were kept busy by a flurry of attacks. Jordao put Portugal ahead in the 97th minute but France hit back through Domergue, played in by Platini, in the 114th minute. Just as penalties were being contemplated, Tigana wriggled through the Portugal defence, went round keeper Manuel Bento and cut the ball back for Platini to score a dramatic winner.

In the other semi, there was more drama as Spain edged past Denmark on penalties following a 1-1 draw. 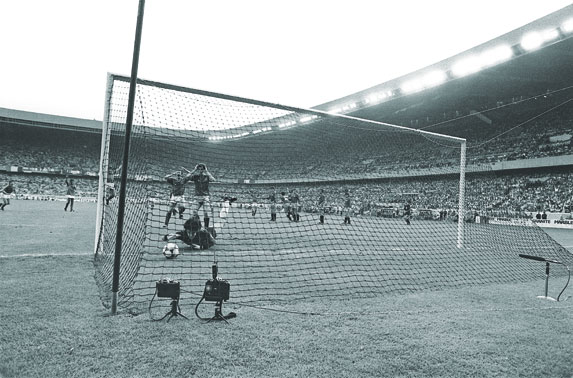 In the Final at the Parc des Princes, in Paris, Spain’s luck finally ran out. Injuries and suspensions deprived them of several key players and a slip by goalkeeper Luis Arconada on 56 minutes proved a decisive blow.

The Spain captain allowed a free-kick from Platini to slip through his grasp and over the line. France coped with the 84th-minute sending-off of Yvon Le Roux and added a second goal, through Bruno Bellone, in the final minute.

Michel Platini’s nine goals in the finals are still a record. His two three-goal hauls, against Belgium and Yugoslavia, were both “perfect” hat-tricks, as he scored with right foot, left foot and his head.

West Germany coach Jupp Derwall, who led his country to European success in 1980, was sacked shortly after the tournament and replaced by Franz Beckenbauer.