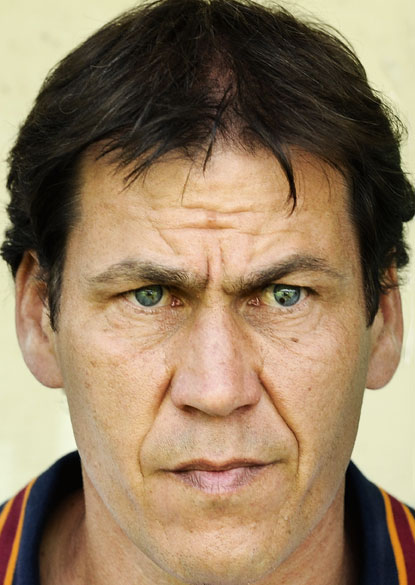 World Soccer: What are your first impressions of the fan culture in Rome? A little different to Lille?

Rudi Garcia: Sure. It’s clear that it’s a place where you feel the passion of the supporters. You can’t compare it to Lille, really. It’s more like Marseille to the power of 10.

You have said before that a football  coach is also an actor. What did you mean by that?

I think that one of the qualities a coach needs is to be able to adapt himself to different situations. He has to understand his different audiences and know how to adjust the rule that he plays.

So who is your favourite actor?

[Laughing] I like a lot of different actors! You can take different things from each one. I read a lot of biographies and articles about football managers, but also high-achieving sports people in general. There are valuable things to be learned from all kinds of different personalities; it’s up to me to interpret those things in my own way. I don’t have one manager who I try to model myself on, but I have a huge respect for all my colleagues who have succeeded in reaching the top level of the game. In the end, everyone needs to have their own personality. I have mine, so I don’t need to copy anybody else.

How would you describe your footballing philosophy?

I think football is a spectacle and people come to watch a spectacle. At the same time, we must not forget that they will be happiest if we are winning games. But personally I think that playing well gives us the best chance to win matches – and give a good spectacle at the same time.

Your predecessor at Roma, Zdenek Zeman, had a similar philosophy about football as entertainment. Is your vision different to his?

I’m not interested in what happened in past years here. What I can say is that to win matches you need to score goals and have a solid defensive plan as well.

At Lille you won the double in 2011 despite competing against far wealthier clubs. What was the secret to your success?

Money makes things easier…but you still need to know how to spend it. For a team like Lille, which doesn’t have the budget of Paris Saint-Germain, the important thing is to make sure you are always bringing through young players and making good assessments of which ones have potential. The other crucial thing is to have a great team spirit, a shared soul which makes sure you always pull in the same direction.

Can you now do something similar with Roma?

From what I’ve seen so far at Roma, we have a nice group of players who enjoy each other’s company and work well together. From that perspective, we have good foundations to build on.

At Lille you had a “Conseil des Sages” [council of the wise men] made up of five or six players who you consulted on team issues. Will you have the same thing in Rome?

We will do the same here, but I haven’t chosen that group yet. I want to wait until I have a better idea of how the players interact and which ones are best attuned to the collective mood of the group.

What does the Conseil give you as a coach?

To use a French expression, it allows me to “take the temperature of the group”. We also have a better chance of achieving success if the players feel like they are leading actors in our project.

Is there a risk of alienating the players who are not involved?

How does it work? Do you speak at regular intervals?

No, it’s less formal than that. During some spells I might not speak to the Conseil for a month, two months at a time. But there are other periods, right after a significant incident, when I might speak to them twice a week.

One player that could expect to be part of that Conseil is Francesco Totti. How has it been for you to work with him?

Francesco is not only a formidable player – a “fuoriclasse” as you say in Italy – but also a man with great qualities outside of football. For me he is one of the very best players in the history of the sport. What I would really love is to win something with him at Roma.

There are those who believe his presence is a double-edged sword. Totti is idolised by the fans, and with such an intense media spotlight might it be hard for you to leave him out if he started playing poorly?

Your first Rome derby is scheduled for mid-September. After Lazio beat Roma in the Italian Cup Final last year their fans held a fake funeral for your team near the Stadio Olimpico…

The fixture list has given us the opportunity to rise from the dead very quickly.