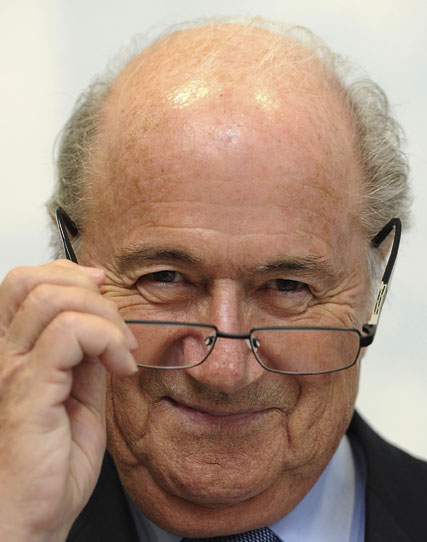 World Soccer: UEFA president Michel Platini admits he voted for Qatar to host the 2022 World Cup. Who did you vote for?

Sepp Blatter: I am not going to say who I voted for. It was a secret ballot and I shall respect that.

Will the Qatar World Cup take place in the summer or the winter?

The FIFA Executive Committee’s decision still stands. The World Cup is held every four years in June or July. If Qatar wish to organise it differently then the Qataris will have to speak with FIFA. So far Qatar has not taken any steps towards requesting a different time period. But they do have until 2016 to do so.

Were you aware that Platini had met with former French president Nicolas Sarkozy and the Emir of Qatar prior to the vote? Were you worried by this?

We were aware of it but it was not a problem. When it comes to campaigning to host a World Cup, each candidate’s government must be firmly behind them. So, at diplomatic level, contact is established with the heads of state, who try to convince the people who have a vote of the merits of their candidacy. They are representing their country’s interests and that is only normal.

No, but the candidates worked their contacts. Diplomatic and political aspects play a considerable role in the awarding
of a World Cup and Olympic Games.

Euro 2020 will be held in 13 different countries. What are your thoughts?

A tournament should be played out in one country. As such, it creates identity and euphoria. UEFA have been overambitious with the 2020 tournament. It is no longer a European Championship. It needs a new name, but I don’t know what. A European Championship like that is lacking in heart and soul. I once told Michel Platini that, when the 2010 World Cup was being awarded, the former ruler of Libya, Colonel Gaddafi, said to me that each of Africa’s 53 countries should host a match and the Final could take place in South Africa. He believed in that idea, but I told him it was unthinkable. I also told Platini that there was nothing new about his idea.

If he wants to; I don’t know if he wants to. He has a certain idea for the future of FIFA, which at some stage he will explain to the other continents. But he has not yet committed himself. For the immediate future, my focus is on pushing the major FIFA reform through at the Congress in Mauritius in May. Then we have the 2014 World Cup in Brazil. After that, anything could happen. If it is then established
that FIFA will continue as it is, that it will remain global and that the pyramid will not collapse, then I will gladly hand the mantle over to a new president in 2015.

What do you consider to be the key points of the reform process?

We have reorganised the supervisory bodies. The Ethics Committee has been divided into two bodies: an investigatory chamber and an adjudicatory chamber.
In addition, the decision for the awarding of the World Cup will no longer be taken by the Executive Committee but by the Congress. The presidential election will also see changes. An association that is putting forward a candidate will need between five and 10, or maybe even more, supporters from at least two confederations. Furthermore, all committee members will be elected by the Congress and will
no longer be appointed by the Executive Committee. The imposition of an age limit or a restricted number of terms of office is not so relevant for the overall package of reforms. What is more important is the integrity check, which has been practised by referees for years.

What steps is FIFA taking against racism in stadiums?

We have set up an anti-racism task force which is not just tackling racism but discrimination in general. While a lot of the educational work must start with young people, we also need sanctions. Theo Van Seggelen from FIFPro, the players’ union, agrees with the deduction of points and clubs being banned from competitions, provided sanctions are applied across the board – including the biggest clubs.

Do you still manage to watch football?

I enjoy football every day. I watch football on every trip and I follow football on the TV. I am the biggest channel hopper there is. I have 600 channels and football is always being shown somewhere. Football is what keeps me going.

FIFA has 209 affiliated members. As its president, does that make you the most powerful person on earth?

No. It is a position of responsibility with a lot of influence and I try to influence the development of football worldwide in a positive way. FIFA has a network of relations within football which stretches all the way to government circles. After all, there isn’t a single country in the world where football doesn’t mean anything. With the exception of the big European countries, where the sport runs itself, football falls under the remit of sports ministers and heads of government in at least 150 countries. We try to use this network for the good of the game and to inject discipline, respect, fair play, determination and self-assertion into football. If we can use the game to bring that to society, then we really will have accomplished something great.