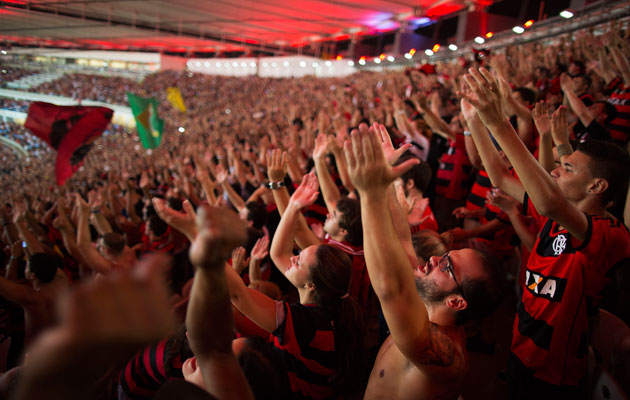 Flamengo beat Vasco da Gama 1-0 in a Rio State Championship clash on Saturday.  It was an uneventful afternoon – for which football in Rio has much to be thankful.

The build up began three weeks earlier, when Flamengo and Botafogo met at the Engenhao stadium the venue for last year’s Olympic athletics and, in the temporary absence of the Maracana, by some distance the biggest ground in the city.  The police were late arriving – a consequence of protests about their working conditions.  Without their presence, the streets outside the stadium turned into a war zone.  Gunshots were fired, rival fans attacked each other with iron bars and one, stabbed by a barbecue stick, was killed.  There were other serious injuries, with another supporter losing the sight on one eye.

A local judge issued a ruling stating that all derbies between the cities major clubs (Flamengo, Vasco da Gama, Fluminense and Botafogo) would be restricted to home supporters only.

It was an arbitrary decision.  Indeed, one could argue that it was not one that a judge should have been making.  The local government appealed against the ruling, and there were howls of outrage from the clubs and in the press.

It is clearly true that the vast majority of football related violence is taking place well away from the stadiums, limiting the effectiveness of a ban on away support – moreover, there are increasing signs of violence taking place between and inside factions supporting the same team.  There is also a clear logistical problem.  A similar decree has been in force in Sao Paulo for the past year.  But there the clubs have their own ground.  Rio, because of the Maracana, has developed a football culture of a neutral stadium.

And, undeniably, a ban on away fans is a confession of failure, an admission by the forces of law and order that they are unable to deal with the problem.  No one should welcome such a ban on a permanent basis.

On the other hand, the death of the supporter at the Flamengo-Botafogo game was treated with alarming banality.  Brazil is becoming brutalised by hideous levels of violence – many even applauded recently when prison riots broke out, and rival criminal factions were beheading each other.  In such circumstances a pause for reflection may not have been a bad idea.

The clubs, though, were not going to let it happen.  Flamengo and Vasco, the city’s most bitter rivals, qualified for Saturday’s semi final of the first stage of the Rio State Championship.  This presented a problem.  Both clubs were dead set against the ban on away fans.  Flamengo said they would reluctantly accept it, but Vasco president Eurico Miranda said that his team would not take the field under such conditions.  So how to proceed?

One solution would be to play the game in a different state.  The ruling only applied to the state of Rio de Janeiro.  Elsewhere, this was not the case.

Attempts were made, at short notice, to organise the game in Brasilia, and then Manaus.  On Monday night the Rio Federation announced that it would take place in Juiz de Fora, just over the border with the neighbouring state, Minas Gerais.  The green light had been given by the Minas Federation.  But no one asked the Juiz de Fora authorities, who on Tuesday morning were quick to call it off – and no wonder.  Why should they deal with the potential of crowd violence between fans of Rio teams, especially on Carnival Saturday, when the security forces were already over-worked?

On Wednesday another judge overturned the original decree, meaning that the game would now go ahead in the state of Rio with two sets of supporters.  With the city awash with revellers, there could be no prospect of staging the game at the Engenhao.  The solution, then, was to send it to the city of Volta Redonda, around 100 miles north-west of Rio.

The stakes were high, as Eduardo Tironi wrote in Saturday’s issue of ‘Lance!,’ Brazil’s sports daily.

“There are two possible paths.  The first would be great for football.  The game takes place, the stadium fills up, the best teams wins, everyone goes home peacefully.  It would be an indication that civilised co-existence is possible without infringing anyone’s rights.

“The other path would be a disaster: the game takes place, but somewhere inside the stadium a conflict explodes.  Those who defend a ban on away supporters will be backed up by the facts.  Should this happen there will probably be no way back in the short term.  The ban will be a reality in Rio, where the party in the stands is as important as the game on the field.”

Reality ended up closer to Tironi’s first scenario.  The best team won – Flamengo were good value for their victory.  There were a handful of arrests, and police frustrated an attempt by a small group of Vasco fans to stage an ambush.  But there were no major incidents.

The stadium, though, was nowhere near full.  The crowd was below 7,000 – a consequence, on one hand of the difficulties faced by Rio-based fans to get to Volta Redonda.  But also an illustration of how fear of violence can keep crowd figures down – and sorting that one out is a far bigger problem than finding a venue for the Flamengo-Vasco game.