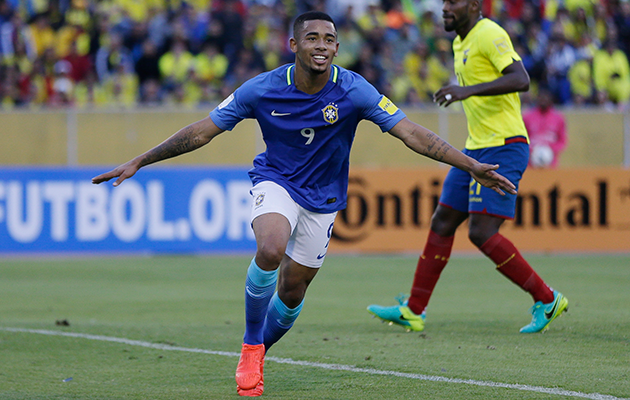 The senior international debut of Brazil striker Gabriel Jesus could hardly have ended up better.  True, for much of the World Cup qualifier away to Ecuador he was offside – a criticism he said that his own mother made of his performance after the game.  Most, though, preferred to dwell on the positive aspects.

Inside the last twenty minutes the game was still goalless, and Brazil would probably have been happy had it ended that way.  Gabriel Jesus ensured that they went home happier still.  He burst behind the defensive line to win a penalty, capably steered home by Neymar.  And with his confidence soaring, Jesus helped himself to two late goals, both of them brilliantly taken but in contrasting styles, as Brazil won 3-0.

To put this result in perspective, of the ten matches in the recent two rounds of South American qualifiers, this was the sole away victory.  It eased Brazil’s nerves, and their situation was looking even better a few days later when they beat Colombia 2-1.  Under new coach Tite, Brazil were the only team to win in both the rounds, and moved up from sixth in the table to second.  With panic now averted, Tite can give himself the luxury of long term planning.  He can build a side to shine in Russia 2018, and Gabriel Jesus has a good chance of being part of it, although he is just 19 and still very raw.

He made little impression on the Colombia defence last Tuesday, and was substituted five minutes from the end.  But his hard work was just beginning.  That match took place in Manaus, in Brazil’s far north.  The next day his club, Palmeiras, had a league game at home to local rivals Sao Paulo, and they flew him back from one end of the country almost to the other so that he could take part in the second half.

This is clearly absurd.  It is true that Palmeiras are top of the league table, and that Gabriel Jesus is their top scorer and star player.  But if he is so important to the cause, then why did they release him to play for Brazil in the Rio Olympics?

The club’s medical team and coach Cuca admit that it is not ideal to play two games on consecutive days with a four hour flight in the middle.  A local regulation stipulates that there should be an interval of at least 60 hours between matches.  But this does not apply if the player declares himself willing to take the field – a foolish waiver.  The players union should surely step in to protect the player from his own desire to play in such circumstances – and also protect them from the wrath of the fans if they decide not to play.

Two years ago after Brazil played friendlies in the Far East, striker Diego Tardelli flew straight back to play for Atletico Mineiro.  Goalkeeper Jefferson, meanwhile, said that he was too tired to play for Botafogo, and was roundly criticised for not turning out.  The pressure, then, is clearly on the player to take a course of action which may not be in his best interests.

Gabriel Jesus, who joins Manchester City next year, made an impact on the Sao Paulo match.  Palmeiras were a goal down when he came on nine minutes into the second half.  They won 2-1.  But there could well be a price to pay.

On Sunday he pulled up with a groin injury towards the end of a 0-0 draw with Gremio.  He will undergo a thorough examination on Monday, and Palmeiras will be fretting on the outcome.  The draw with Gremio cuts their lead at the top to a single point, and on Wednesday they face second place Flamengo.  Then on Saturday comes the derby against their historic rivals Corinthians, the reigning champions who are currently lying fourth.  If Gabriel Jesus is not fit enough to play, or to do himself justice, in these crunch games, then Palmeiras will only have themselves to blame.