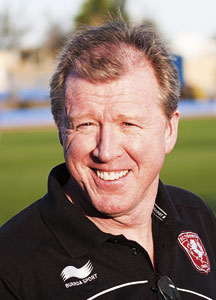 World Soccer: As you’ve become older and more experienced, how have you changed as a person and a manager?

Steve McClaren: Just a little bit milder, I suppose. Starting off you are a little crazy, a little headstrong, you think you can change the world. You are a little bit, maybe, dare I say it, “head up your arse”, maybe too ambitious. When I first started I just wanted to be a bloody good coach and I felt I did that. I was at Manchester United for two-and-a-half years and assistant with England for five or six years. That sort of calmed me down. Then I went into management and I needed to prove myself again.

I suppose winning the [League] Cup with Middlesbrough was a breakthrough and kind of settled me down a little bit more. England was a humbling experience – get back down to earth, pick yourself up and go again. The success in Holland has chilled me even more, really, but I’m still ambitious to be successful at whatever I do.

Being the age you are, you straddle the “old” and “new” schools of management. Where do you feel most comfortable?

That’s a very, very good question. I like the old school, the simplicity of it, the honesty: this is what you have to do, get on with it, never whinge, never moan, no excuses. It’s so simple and so effective. But society has changed. When I started I had just read about American sports, which had gone from your old-school Vince Lombardi-type of coach to the new kind of athlete.

I did a lot of reading on American coaches and how to coach and motivate millionaires because I thought this is where we were heading with the Premier League and Sky. A lot of money was coming into the game and it was going to change, so I read a lot about how to manage these changes. I would say I’m more into the modern way of doing things now than the old school, although there is a time and a place for that kind of honesty.

How did the England job and the media reaction affect you as a person?

You just try not to take it too personally because you know you are dealing with people who have never had to make the kind of decisions you are making, never had to sit on a bench, never had that kind of pressure. I just took it as part of the game and never read anything, never listened to anything. I said what I thought and moved on. And in the end that was my downfall because I felt that the only way to survive was by getting results – and I didn’t get results so I was in trouble.

Is it important as England manager to forge relationships with the media?

It can give you time, but you look at Fabio Capello, who is one of the best managers in the world and got an unbelievable amount of stick two years ago. That’s the job and nobody is immune to it.

How do you look back on England?

The England manager’s job, however it went, has opened so many doors for me which wouldn’t have been open before. I would have gone from Middlesbrough to where? Being manager of England has its downsides and upsides. I suppose I’ve been lucky. I’ve got a name in Europe, well respected in Europe, maybe even more so than in England.

Anything to prove to anybody?

No, not really. For me it was a case I had the England job, still only 46 or 47, so still a young coach, so maybe I was too young, inexperienced. I’ve got to go out there, take the hit and get back on the horse.

And the only opportunity I got was abroad, so I thought “great” and I took it. It was satisfying coming to Holland and doing well, but I didn’t feel I had anything to prove to anybody. I knew I could be successful because I’d done it before and did it again.

People within the game know that, it’s the outside world that looks on differently…

Well that’s the key. Its the respect within the game that keeps you sane. We are all rivals, we are all professionals, we all know the profession. I always thought as well that I had a good relationship with players. They never came out afterwards, like you usually get, you know, “glad he’s gone”. There was none of that.

I’ve always maintained a very good relationship with players, managers and coaches – which for me is the most important thing because in years to come I want to give something back to younger managers and younger coaches who are trying to do what I am doing. I have been lucky in my career. I got to the England situation and they went “well, you’ve had a bit too much, now we’re going to wallop you” – and they walloped me well and truly. That was a humbling experience and made me realise it’s all about job satisfaction.

Did it shatter any illusions you had about the game?

Not really. I’d had five years with Sven [Goran Eriksson] so I’d seen what he went through and knew exactly what I was letting myself in for. But can you turn it down? No. Wow, what an opportunity!

* This is an excerpt from a profile on Falcao. The full article is available in the October issue of World Soccer.