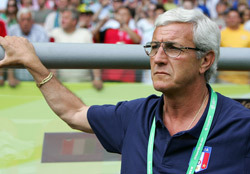 World Soccer: Are you worried that you might be taking an overage “Dad’s Army” to South Africa?
Marcello Lippi: If I had to play a competition that lasted for a year, then I would probably make other choices. But, since the World Cup finals last one month, there is no problem about being “too old”. It really doesn’t matter if the player is 32, 31, 27 or 21 years old. When you come to evaluate a player, you don’t look just at his technical qualities and his age, but also at his intelligence, his charisma, his international experience, his ability to help out at key moments during matches. Over the course of a month, there are 35-year-olds who may turn out to be more useful than 25-year-olds.

Historically, it has always been extremely difficult to win successive World Cups. What are Italy’s chances this time?
If only we and Brazil have done it [1934 and 1938, and 1958 and 1962], then there must be a reason. To win this World Cup, we’ve got to have the same mental and physical strengths we had four years ago, the same solidity, the same unity of purpose and, of course, that same slice of luck.

What do you make of all the unsolicited advice regarding selections directed your way?
Every country has its tormentone [pests] – players who the fans and the media want to promote. In Italy we’ve had Cassano; people are currently pushing for Balotelli and there will be others. In Brazil, you have Ronaldinho and others too. But then you have the national team coach who makes concrete, rational choices linked only to the creation of an important group featuring players who have the psychological and physical attributes necessary to win.

Who will win the World Cup?
Wherever you go, people always tell you that Brazil will win the World Cup. This year, people also add Spain because they are having a good moment, they are the European champions and are full of confidence. In reality, you have five or six teams such as England, Holland, France, Germany and Italy – teams who don’t go to the World Cup to make up the numbers, but rather go to win… and they can win too.

How do you rate your first-round opponents?
Paraguay are obviously the one with the best credentials. They played at a very high level for two years in the South American group, leading for much of the way and only losing out at the end. They play a very quick, slick football but we know them well. As for New Zealand, we played them last year in a friendly in South Africa and we know they are physically strong, very dangerous in the air, especially at set-pieces. However, this is a team against which we would expect to do well. Slovakia have a very good unit, they play a typical Czech type of football, they are dynamic, fast and young and then they have a real talent in Napoli’s [Marik] Hamsik up front, a player destined for a great career.

Critics looking at the recent 0-0 draw with Cameroon, compared it unfavourably to the 3-1 win against Germany in Florence in March 2006 and concluded that this Italy are a long way short…
It is wrong to make such comparisons. The reality is that four years ago we had all our first team, while against Cameroon we were missing six or seven first-choice players and I also gave a first cap to two young players [Andrea Cossu and Leonardo Bonucci]. Everybody looked at that game and said that the team are a long way from their best form but that really doesn’t count. What matters is being fit, well and in form in June.

How do you rate the African finalists?
Sides like Ivory Coast and Cameroon are good teams and it is possible that the experience of playing a World Cup in Africa could give them the inner force to go a long way and to do really well.

So, in what frame of mind do you approach this summer’s tournament?
We all know that it will be much more difficult, but I would point out that in four years in charge, my Italy has lost only one competitive game [1-0 to Slovenia in a World Cup qualifier in October 2004]. Then, when we are together for a month, we usually manage to put together something good.