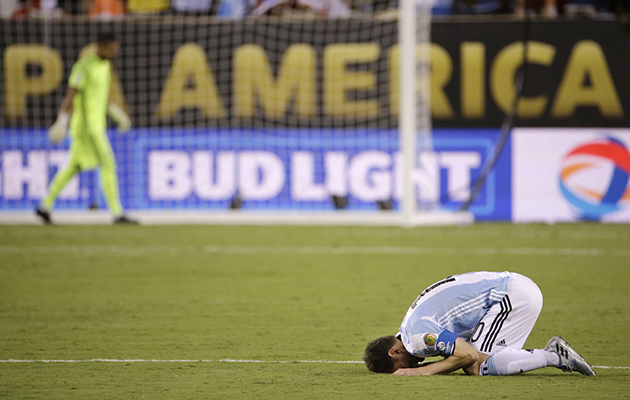 The Copa Centenario looked like a heaven sent opportunity for Argentina to end their long, dry run without a senior title.  Instead of having to wait for the next World Cup, an extra Copa gave them a crack at a trophy while the generation of attacking talent is still in its prime.

And until the final hurdle it was going so well.  Coach Gerardo Martino worked hard to nurse along those individual stars.  Lionel Messi did not start a match until the quarter final.  Sergio Aguero was fresh in reserve to Gonzalo Higuain.  What could go wrong?  But losing the final to Chile on a penalty shoot out – for the second consecutive year – could have far-reaching consequences.

Losing on a penalty shoot out is a heartbreaking way to go down to defeat.  Most of this teams have had the experience twice – Javier Mascherano, who was around back in 2004, has been through it three times – as well, of course, as the single goal loss to Germany in the World Cup final and the deeply disappointing 3-0 reverse to Brazil in the final of the 2007 Copa.

Had Messi scored from his spot kick then the shoot out would surely have developed differently.  Arturo Vidal had already missed for Chile.  Argentina would have been in front, and the pressure all on the Chileans.  So Messi was clearly hurting when he declared after the game that he would no longer play for the national team.  It is a decision that will surely need a little more reflection.

There are, though, no guarantees that he will reconsider.  There is more at play here than just a depth of emotional pain.  There is also growing frustration with the Argentine FA, and especially with the way its financial and organisational problems had an impact on the team’s preparations during this tournament.  Messi hinted at discontent on the Friday before the final, and said that he would return to the subject once the competition was over.  But if his differences with AFA do tip him over the edge, more players will surely follow his lead.  Some may well retire from international football in any case.  Mascherano briefly flirted with the idea after last year’s disappointment.  He could well jump this time.

This means, then that Copa Centenario, instead of being a solution, has become a giant problem for the Argentina national team.  And it also means that the Olympic tournament suddenly takes on extra meaning.  If Messi and key members of the current squad do pull out, then replacements will be needed in a hurry – and those interested cane stake a claim in Rio.