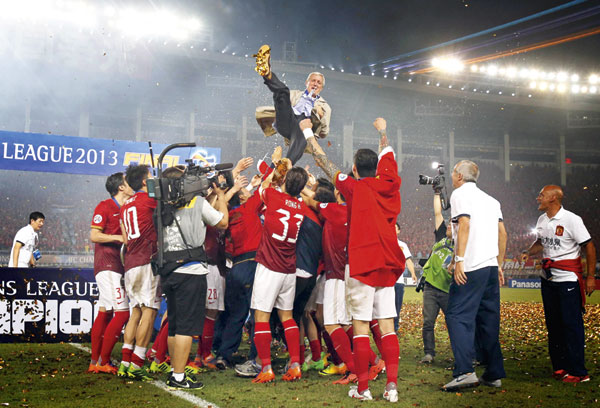 When the Italian replaced the locally well-respected coach Lee Jang-soo at Guangzhou Evergrande in May 2012, the club’s fans could have been forgiven for wondering whether such a move was really necessary.

Although nowhere near as internationally famous as his replacement, the South Korean was extremely popular, having led the club to promotion in 2010 and the Chinese Super League title in 2011, both by huge margins. By the time he was fired midway through the 2012 season, Lee’s side were again top of the league and had just made it to the knockout stage of the AFC Champions League in their debut campaign.

Initially, at least, Lippi didn’t seem to offer anything special. By the end of 2012, Guangzhou had won the league by a single point and crashed out of the Champions League, the competition that the club’s big-spending real estate backers Evergrande – who have spent over £40million on such talents as Dario Conca, Elkeson, Muriqui and most of China’s national team – really wanted.

But in 2013 the supporters finally realised what it was that made the new boss special. While Lee sometimes struggled to handle the foreign stars – Conca was banned for nine games in 2012 for criticising the coach on social media – Lippi had the Argentinian playing out of his skin.

However, it was with the Chinese players that Lippi has had the biggest influence. Zheng Zhi, once a midfielder with Charlton Athletic and Celtic, became a completely different player under the Italian. Calm and composed, he was happy to drop back from midfield to play as an auxiliary centre-back one minute, then popping up near the opposition penalty area to nip a counter-attack in the bud the next. Zhang Linpeng – called “our Ramos” by Lippi – has developed into a classy full-back, while once-inconsistent striker Gao Lin is more hit than miss these days.

The more time Lippi spent on the training pitch, the more comfortable his side became in moving between 4-3-3, 4-2-3-1 and 3-5-2 in a seamless fashion rarely seen in Asia. Lippi rotated intelligently and ensured that his team was on the boil when the big games came around.

Guangzhou even managed to do what few other teams in Asia had managed before: win at home, easily, and do the same on the continent.

Korean and Japanese teams have traditionally dominated the AFC Champions League, but most winners saw their domestic form suffer. Urawa Red Diamonds were so exhausted after their 2007 continental triumph they let a 10-point lead in the J.League disappear with just five games remaining. Seoul, beaten by Guangzhou on away goals in the 2013 Final, were in the Korean title race before the latter stages of the Asian competition became too much. Guangzhou, meanwhile, were  head and shoulders above the rest of the competition both at home and abroad as they took continental and domestic honours.

Just five minutes away from the club’s Tianhe Stadium, where Lippi always gets the biggest cheer when the teams are announced, is the coach’s favourite Italian restaurant, situated on the third floor of one of the many international hotels. It is a fine reminder of home for a man who has brought an intelligent taste of Italian football to China and Asia.