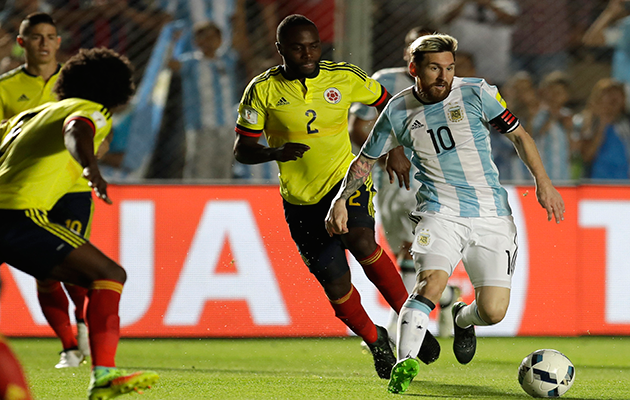 Almost five and a half years ago, Lionel Messi was superbly man marked out of a Copa America game on Argentine soil by Colombia’s Carlos Sanchez.  In last Tuesday’s crunch World Cup qualifier, Sanchez had help.  He sat in the middle of a trio of defensive midfielders, Daniel Torres to his right, Wilmar Barrios to his left.  And Messi made all three of them irrelevant.

The Messi of 2016 is a more intelligent player than the 2011 version, more adept at reading the game, at finding the space in which he can be most effective.  Against Colombia in San Juan he went round Colombia’s Maginot Line by moving out to the wing, and he tipped the balance from there.  He had plenty of room.  Colombia’s attacker on that side of the field was James Rodriguez, for whom working back is not a specialist.  And in front of Messi was an improvised left back, Eder Alvarez Balanta, much more experienced playing in the middle.  Messi managed to sneak infield and win a free kick, from which he opened the scoring.  And he set up the other two goals in Argentina’s 3-0 win by working as a winger.

It was a morale boosting and vital win for Argentina, who moved up to fifth in the table, the play-off position.  Their next three games are not easy – a challenging match against Chile followed by trips to Bolivia, with extreme altitude, and then Uruguay.  Without the win over Colombia Argentina would really be in trouble, and Lionel Messi was the difference between the two sides.

Colombia coach Jose Pekerman surely bears some the blame for this.  Pekerman, of course, was previously in charge of his native Argentina, where he constructed a fine side that could have won the 2006 World Cup.  They fell in the quarter finals, losing to the Germans on a penalty shoot out in a game where the coach controversially substituted key playmaker Juan Roman Riquelme.  He also chose not to introduce a teenage Messi, whose ability to keep the ball would have been very interesting when Argentina were protecting their lead.  It was Pekerman who gave Messi his international debut in 2005 – and also Pekerman who got his strategy wrong for Tuesday’s meeting with the little genius.

Last June in the Copa Centenario quarter final Venezuela tried to tighten up against Messi by playing a trio of central midfielders.  And just as he did last Tuesday, Messi played outside them and won the game.

Colombia were up against an Argentina side still trying to recover from a humiliating defeat against Brazil, one in which its creaking defensive unit had fallen apart to such an extent that they could consider themselves very lucky to have lost by a margin of only 3-0.  Pekerman may well have been better advised to seek to take the initiative, to try and bring James Rodriguez into the game by giving him a midfield partner – something which happened, with partial success, when Macnelly Torres was brought on at half time, with the team already two goals down.

The nightmare for the Argentine defence would be to have quick, skilful players running at them – Juan Guillermo Cuardrado caused them problems, for example.  So why go with Radamel Falcao Garcia, a penalty box finisher, at centre forward?  It was a game for the speed and dynamism of Carlos Bacca, especially given his link up play with Rodriguez.

Pekerman, though, seems lost at the moment.  True, he had to make two enforced changes at centre back, with Oscar Murillo suspended and Yerry Mina injured.  Davinson Sanchez came in for his debut – and was taken out by Messi’s cross when Lucas Pratto headed Argentina’s second.  The other centre back, though, was Jeison Murillo, who was first choice until September.  And in addition to the two enforced changes, there were five other changes from the side that five days earlier drew with Chile – and that line up showed four changes from the one which had drawn with Uruguay last month.  Colombia have now used 38 players in the course of this campaign – none of the top four in the table have used more than 30.

The coach currently seems unsure of both his best team and also of the side’s identity.  He would seem to be badly needing the breathing space before the qualifiers resume again four months from now.  Colombia and Argentina will not meet again in the remaining third of the campaign, but they are in direct competition for a place in Russia.  There are more chapters to be written, then, in the story of Jose Pekerman and Lionel Messi.