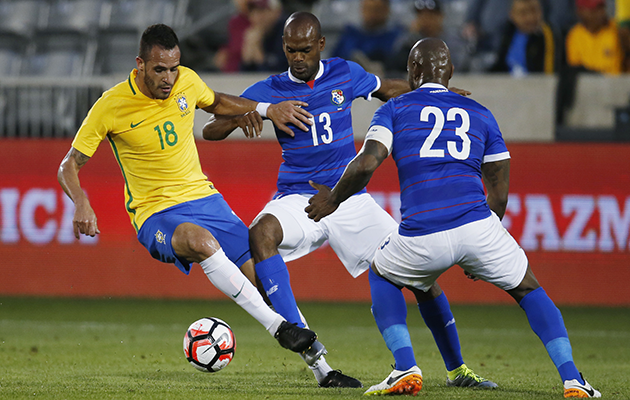 Something extraordinary happened in Brazil’s friendly against Panama on Sunday night.

At half time, with Brazil a goal up, Luiz Gustavo was substituted.  On came Hulk in his place, and for the first time in what seems like an eternity, Brazil lined up without a specialist marking midfielder.

The holding role has always been part of successful Brazil sides.  Zito performed the role in 1958 and 62, and was succeeded in 1970 by Clodoaldo.  But these two could also really play.  Zito scored the vital goal in the 1962 World Cup final against Czechoslovakia with a genuine box to box move, and Clodoaldo was wonderfully fluid in possession.  In 1994 Mauro Silva’s interpretation of the role was more conservative, but his intelligent and unflashy covering work came accompanied by crisp and precise distribution.

The success of that side, when current coach Dunga helped him shore up the midfield, had serious ramifications.  Virtually all Brazilian club sides played a pair of defensively minded midfielders.  It became an unwritten rule that the centre backs should never be left one-on-one with the opposing strikers.  Before long in Brazilian football, the centre backs were being protected by converted centre backs operating in front of them – the logical conclusion of this was that one of them, Gilberto Silva, anchored the national team’s midfield for nearly 100 games.  He was eventually replaced by Luiz Gustavo, a player perhaps offering a bit more in possession, but essentially a marker.

The lack of elaboration from centre field has done much to limit Brazil to counter-attacks – and there seemed little hope of this changing when Dunga was re-appointed as national team coach after the World Cup.

In his first spell in charge (2006-10) he was the snarling high priest of the counter attack.  His teams could be deadly when the opponents had a corner – Dunga’s Brazil were capable of exploding from one end of the field to the other in a matter of seconds.  But when denied space to go at speed, they could be very laboured and ordinary.

It looked as if the second spell would be a similar story.  But there was a timid sign of change last November when Brazil hosted Peru in the fourth round of World Cup qualification.  With a tweak from 4-2-3-1 to 4-3-3, Renato Augusto was brought into the team.  Now the midfield trio included a cerebral player with a wide range of passing.  Now, after half time against Panama, Brazil took a step further.  Once Luiz Gustavo was removed, it was Renato Augusto who dropped, orchestrating play from a deep position.

It was only a brief experiment.  By the end, the neat Rodrigo Caio came on for his senior debut and slotted into the holding role.  And come the Copa Centenario there is considerable interest in seeing if Casemiro is given a chance to reproduce his recent Real Madrid form.  With him on the field there is a chance that Brazil can have both protection and improved midfield elaboration.

If there is a change of style in progress, it is just as well that all the responsibility is not heaped on the shoulders of Renato Augusto.  After helping Corinthians win last year’s Brazilian Championship, the 28 year old accepted a big money offer from Beijing Guoan in the Chinese league.  This presents logistical problems – it is a long, tiring journey for him to make for the qualifiers in September, October and November.  But there is also a very clear reason for his decision to go to the Far East, as he made clear at the time; his career has been blighted by injuries, and so the threat of picking up more of them made the offer too good to refuse.

It is problematic, then, for Brazil to base too many long term plans on such a player.  For now, though, purists can cling to the hope of a Brazil side that aims to be easier on the eye.