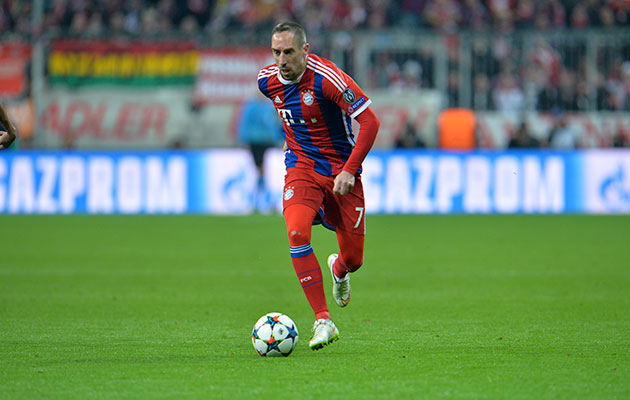 Out since March with a complex ankle condition, the French maverick announced at a sponsor’s event that he had high hopes of returning to action in the December 12 Bundesliga fixture against Ingolstadt. ”

For the last couple of weeks, I’ve been training hard and felt a lot better, ” declared the 32-year-old. “I can sprint and do everything I want to with the ball. I’m enjoying myself once more.The ankle joint is holding up well.”

Bayern chairman, Karl-Heinz Rummenigge, is, however, urging caution. He does not want his Gallic star to be fixated by a schedule, arguing that it would be better to put off the grand reopening until the New Year. Ribery has only appeared in 23 competitive matches for Bayern in the last 18 months and that’s a lot rustiness to remove.

2. Mats Hummels: Step forward the scapegoat.
Little wonder the usually genial and eloquent Dortmund centre-back and skipper is so grumpy, hitting out at his detractors on Twitter and reacting with disdain to media requests.

Criticised left and right these past few weeks for his inconsistency, sloppy errors and lack of leadership skills, the German World Cup winner is having a real crisis of confidence at the moment and certainly did not help his cause last week when conceding a soft penalty for a shirt-pull in the Europa League defeat in Russia to Krasnodar.

Dortmunder coach, Thomas Tuchel, made a point of unequivocably backing his captain, praising his all-round performance. But there does seem to be a problem, with whispers emerging that Hummels is not as active as predecessor Sebastian Kehl in rallying the troops and representing the interests of his teammates. Hummels’ body language is not good and it just might be that he is contemplating a move.

Don’t rouse the bear…Huub Stevens lashes out at critics.

Still without a win in four attempts, Hoffenheim caretaker boss, Huub Stevens, has spent his entire football life – both as central defender and coach – in combative mode and certainly was not looking to make peace after his team conceded a late equaliser in Saturday’s helter-skelter 3-3 draw at home to Borussia Mönchengladbach.

The whiff of cordite was in the air as soon as the grim-faced Stevens arrived at the post-match press conference and taking exception to the line of questioning from the chief reporter of the local Rhein-Neckar Zeitung, the ‘Knurrer von Kerkrade’ (Growler from Kerkrade), launched into a savage bare-knuckle attack: “You’re not worth it. I don’t think you have all your faculties. What can I do if you don’t listen ?”

Unacceptable as well as understandable. The south-westerners have not have not won for seven games, they have yet to win at home this term and remain bottom of the Bundesliga pile.

4. Bremen think the unthinkable – their first relegation in three-and-a-half decades.
Werder Bremen 3-1 home loss to Hamburg on Saturday – the former’s first ‘Nordderby‘ defeat at the Weserstadion since 2007 – could not have come at a worse time for the Green-and-Whites, who, the week previously, were blown away 6-0 in Wolfsburg.

Just three points in advance of the automatic relegation places, Bremen have now lost six of their seven home games this term and while general manger, Thomas Eichin continues to back Ukrainian coach, Viktor Skripnik, there is a definite feel of the gallows about the place.

Spirits in the dressing room are low. The coffers are empty. The crowd on the verge of open hostility. Can Skripnik turn it around ? Not if you look at the major fault lines beneath his feet: the loss of form of key midfielders, Zlatko Junozovic, Philipp Bargfrede and Fin Bartels; their penchant for snatching at goalscoring chances and vulnerability to a swift counter-attack. Ominous.

5. Wolfsburg’s awayday malaise.
Held to a goalless draw at lowly Augsburg on Sunday, the ‘Autostadt‘ All Stars show absolutely no sign of finding a cure for their Bundesliga road trip blues.

While invariably fluid, explosive and triumphant at home, the Wolfsburger have won only once on their travels this season, picking up just six points from a possible 24 and amassing the paltry total of three goals.

Far too few for a front-line boasting A-listers such as Bas Dost, Max Kruse and Andre Schürrle. Fresh from their impressive 2-0 Champions League victory at CSKA Moscow, the Wolves must have thought Augsburg – who prior to the weekend had lost five times on their patch – were ripe for the plucking.

But sadly it was to be the same old misfiring scenario: high on enterprise and good possession, but decidedly low on killer instinct and chance-creation. “We must show more,” said Hecking.

Patience is running out.