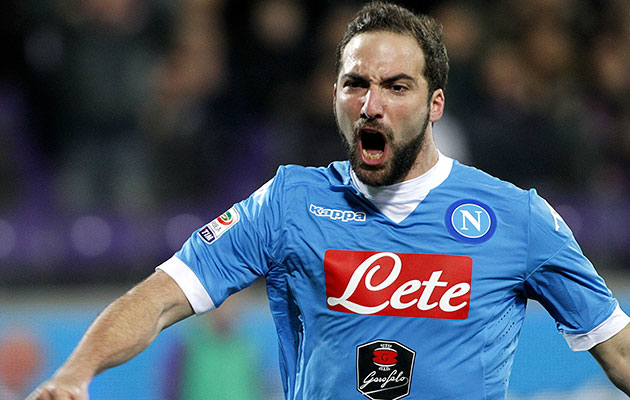 There are key moments in every title contest, vital moments when the fate of a league title hangs in the wind. It may be that on Sunday night, we witnessed precisely such a moment during Napoli’s 3-1 home win over Genoa, a win that enables the Neapolitan side to hang onto the Juventus coat tails, still just three points behind the imperious Old Lady.

By the time Napoli took to the field against Genoa, Juventus had already played on Sunday afternoon, bouncing back from the disappointment of their unhappy Champions League elimination by Bayern Munich to win the Turin derby 4-1. That Juve win was not without polemics (derby wins rarely are), with Torino denied a perfectly regular equaliser which would have made the scoreline 2-2 with half an hour still to play.

Torino had been 2-0 down at halftime but had given themselves a lifeline with a 48th penalty, scored by 22-year-old Andrea Belotti, one of the emerging talents of Italian football. Even the penalty was not without controversy since Torino’s Brazilian striker Bruno Peres had been hacked down by Juve compatriot Alex Sandro, a player already on a yellow card and thus a candidate for a red card. Referee Nicola Rizzoli, however, ignored the Torino protests, leaving Sandro on the pitch.

However, that apparent “injustice” was as nothing compared to the disallowed goal. Subsequent replays showed that the referee’s assistant had simply got this one wrong, ruling Torino’s Max Lopez offside when in fact he had been played on by Juan Cuadrado.

Despite those understandable Torino reservations, however, Juventus nonetheless had given an impressive performance, one which showed that the Bayern defeat had knocked them out of the Champions League but not off their stride. With that win, they had clearly put the pressure on Napoli.

That pressure perhaps had its effect, too, when Genoa’s useful Venezuelan Tomas Rincon found space for himself just outside the area to strike a spendid long range, 10th minute goal. From there on, Napoli huffed and puffed, dominated the first half, created chances but were often denied by Italy No. 2 goalkeeper Mattia Perin to leave the half-time scoreline 0-1 in favour of Genoa.

Just when Napoli seemed headed for an upset that would have seriously compromised their title chances with only eight games left to play, up stepped the Napoli talisman, Argentine Gonzalo Higuain. Napoli started the second half with a sense of urgency that reaped an immediate harvest as their right back, Albanian Elseid Hysaj, picked out Higuain with a precise cross for a 51st minute equaliser, brilliantly slotted away by the Argentine.

Galvanised by that goal, Napoli then produced one of the most dominant and intense half hours of the Serie A championship. Within two minutes, the inspired Higuain might have scored the winning goal, narrowly angling a shot just wide.

In the 81st minute, at a moment when it seemed that Napoli’s dominance might not pay off, Higuain struck again. Picking up a perfectly weighted pass from Slovak team mate, Marek Hamsik, on the left edge of the area, Higuain shimmied to his right, avoiding two defenders and hit a wonderful, curling bender which bounced in off the goalpost, leaving Perin no chance.

Championship titles are made of goals like this. Just to round off the evening, Moroccan Omar El Kaddouri, who had come on as an 89th minute substitute for Higuain, struck on the counter for an injury time goal against a Genoa side that by this stage had been run ragged. Genoa probably did not deserve to lose 3-1. Indeed, at one point, they had gone close to a 2-2 scoreline when Alessio Cerci had a shot deflected narrowly wide.

However, the bottom line here has a face and a name – Gonzalo Higuain. It is indicative of his magical moment that, with 29 league goals to his name, Higuain has scored more than twice as many goals as his closest rivals in the goalscorers’s chart – namely Juve’s Argentine Paulo Dybala and Milan’s Colombian, Carlos Bacca, both on 14.

With Juve on 70 points, Napoli on 67 and third placed AS Roma on 60, it is stating only the obvious to point out that the title championship is now an exclusively two horse race. For Juventus, the lack of energy sapping Champions League clashes from here to the end of the season in May may well be the biggest consolation to be had from their unlucky elimination by Bayern.

For Napoli, that elimination surely represents bad news. However, they can console themselves with the season long, electric form of Higuain. If, then, Napoli go on to claim a third title, many will look back at Higuain’s imperious second goal against Genoa on Sunday, as one of those cliffhanger moments when pure class did the business for them. Pure class, just like another Argentine who once played for Napoli, what was name, Diego Somebody, no?