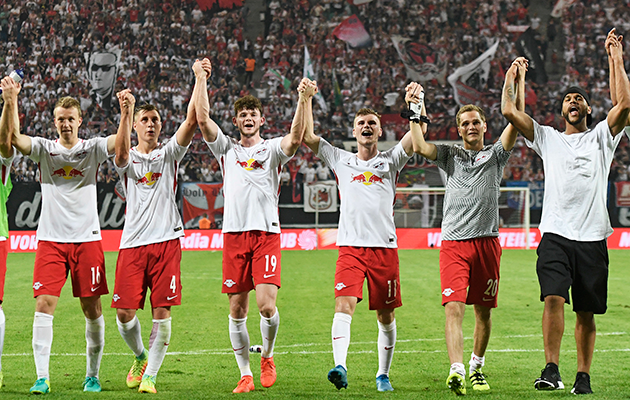 Yet even some of RB’s most fervent detractors would have to admit that there was something very refreshing in the way the newly-promoted club marked their first-ever Bundesliga home game with the scalp of mighty Dortmund on Saturday night.

Fearless, well-organised and full of running, Ralph Hasenhüttl’s young side steadfastly refused to give an inch and one minute from the end, received their due reward, Scottish boy wonder, Oliver Burke setting up Naby Keita for the only goal of the game. You absolutely know it’s your day when two of your substitutes combine at the death to pick the winning numbers.

“It’s fantastic to have such quality on the bench,” smiled Hasenhüttl after the match.

“The atmosphere in the ground (the bubbling cauldron-like Zentralstadion) just got better and better as the game progressed. The fans noticed that more support was required. The substitutions gave us the necessary punch. ”

While some Dortmund supporters refused to travel to Leipzig – claiming that Red Bull’s involvement runs counter to the traditional membership-based structure of most German clubs – 4,000 Yellow-and-Black followers did the make the trip.

“The fan boycott was, in truth, a damp squib, ” declared Hasenhüttl. “The tickets for the away block sold out very quickly.”

2. Eins, zwei, drei.
Finnish front-man, Joel Pohjanpalo, once again turned out to be Leverkusen’s supersub, netting a 15-minute hat-trick as the Rhinelanders turned a one-goal deficit at home to Hamburg into a heaven-sent 3-1 victory.

It was the second time in as many Bundesliga games that the 21-year-old Scandinavian had come off the bench to score – doing so in the 2-1 defeat at Gladbach on Matchday 1 – and now boasts the ultimate set of strike-rate figures: 30 minutes on the pitch this term, four shots, four goals.

On Leverkusen’s books since 2013, Pohjanpalo has spent the last three seasons on loan at second division, Aalen and Fortuna Düsseldorf and arguably would still be on the Werkself fringes if veteran attacker, Stefan Kiessling, was not labouring with a shoulder injury.

“All three of his goals were picture book efforts, really well taken, ” said Leverkusen coach, Roger Schmidt. ” The last one (a fine right-foot finish) was especially impressive, a clear sign that his self-confidence is high.”

3. A tale of two-halves
As indicated by the surreal score-line, Mainz’s 4-4 home draw with Hoffenheim on Sunday was a thriller from start to finish, the sort of topsy-turvy encounter which leaves fans as breathless and disorientated as the players on the pitch.

Inspired by Argentine striker, Pablo De Blasis – who scored twice and made another – the hosts led 4-1 at the break and must have assumed the three points were in the bag. But Mainzer doubts began to form when defender, Gaetan Bussmann was rather unjustly red-carded for bringing down the Croat, Andrej Kramaric and taking full advantage of their numerical superiority, Hoffenheim roared back into contention, eventually restoring parity thanks to a ten-minute blitz of three goals, all of them the work of substitutes (Dutchman Mark Uth with a brace and the Hungarian, Adam Szalai).

A slice of Bundesliga history for both sides. The first time Mainz had ever let a three-goal lead slip; the only instance of Hoffenheim avoiding defeat after going three-down.

4. The pressure mounts on Skripnik
His dysfunctional side without a point this term after losing 2-1 at home to FC Augsburg at the weekend, Werder Bremen coach, Viktor Skripnik very much continues to wear the mask of the condemned man.

Defeated in each of their competitive fixtures this season (Bundesliga reverses against Bayern and FCA and a shock German Cup elimination to third tier, Lotte), the Green-and-Whites have not started a campaign so badly in 49 years and with the mood of the fans turning ugly, it’s hard to see even a sliver of hope for the Ukrainian boss.

Bad news all round for Werder, who also had the misfortune to see Italian defender, Luca Caldirola break his leg on Sunday. He is expected to be out for at least five months.

5. Darmstadt get lucky
Little wonder Eintracht Frankfurt felt so aggrieved at the end of their 1-0 Hesse derby loss in Darmstadt. Despite winning the possession war 78:22, creating the best chances and generally outclassing their local rivals, the Frankfurter still trudged away empty-handed. Undone by a last-minute Sandro Sirigu goal, which essentially was a miss-hit cross.

“It was a pig of a ball, one which gains height then dips suddenly, ” said Darmstadt coach, Norbert Meier, referring to the unusual winner. “No keeper could have done anything about it. “