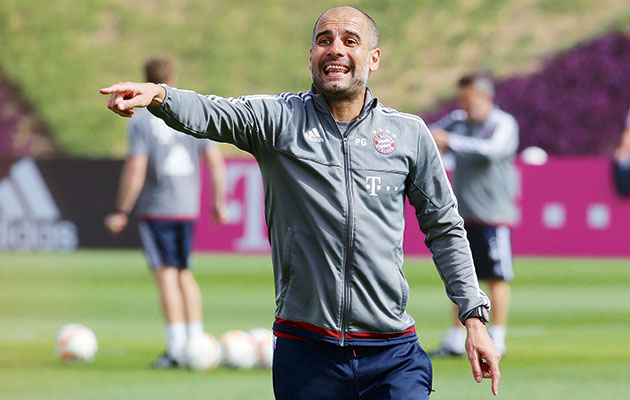 Eddie Jones, the vastly experienced coach of England’s rugby union team, is full of awe for the sporting manager he admires above all others: Pep Guardiola.

Normally, the two codes are uneasy bedfellows – which only serves to emphasise the reverence across the world of sport for Guardiola as he prepares to become the manager of Manchester City next season.
Jones has spoken of how he had gone to Bayern Munich to study the work of the master of soccer.

“It was absolutely fascinating to watch Guardiola doing a training session,” he explained. “He was so bloody brilliant; and watching him work I was embarrassed by the standard of my own coaching.

“I had an hour and a half with Guardiola, talking about his philosophy, about how you move the football in space. Rugby is like football. You want to have a formation so that the players know where to go – how to move in relation to where the ball is, how the ball moves and what the defence does

“Guardiola told me he is a big rugby fan. He studies rugby and handball to look at how you move the ball into space.”

The sentiments reveal why Manchester City are so thrilled to have secured the services of Guardiola. They also reveal why high-class current boss Manuel Pellegrini has accepted his exit with such dignity, and why the rest of the Premier League giants are so anxious about the Spaniard’s arrival.

Guardiola is simply the best. He has proved it at Barcelona and Bayern, and it is the wishful thinking of fools to believe that his brilliance will be dulled by the nature of English football.

How will he cope with demands of a heavy and relentless fixture schedule? Well, just the same way he did at Barca, where the pressure to succeed was even more ferocious.

The essence of Guardiola’s regime is not so much the style – though that is forever magnificent – but energy, work rate and discipline. What transfixed Jones more than anything was the intensity of the training he witnessed, the buckets of sweat pouring from the bodies of the World Cup-winning superstars such as Thomas Muller.

Will Guardiola prove a success at Manchester City? Of course he will. The real question is how City’s rivals in the Premier League respond – particularly Chelsea, after a dismal campaign, and Manchester United, who have struggled under the cautious martinet management of Louis Van Gaal.

Arsenal will trust for a 20th year in Arsene Wenger. That we know. They did not covet Guardiola; it was the wrong moment for them.

Chelsea did want Guardiola, but found him out of reach and are now searching for the next best, debating the merits and availability of a fine cast including Massimiliano Allegri, Jorge Sampaoli, Diego Simeone and Mauricio Pochettino. For the first time since oil billionaire Roman Abramovich bought the club, they appear uncertain of their direction.

The smart money seems to suggest that United will respond to Guardiola’s arrival by employing Jose Mourinho to replay the intense battles these two fought in Spain while at Barcelona and Real Madrid. It would certainly give United equal billing in the publicity stakes – which would boost the club’s precious share price – even if it could not bring parity or superiority on the field of play.

It would also be a captivating spectacle for the neutral for as long as Mourinho could keep from self-combusting.

Whether it would be in the best interests of Manchester United is quite another matter.
Mourinho’s brand of managerial mayhem is not in the style of the club and surely they would be better served by the appointment of one of their own in Ryan Giggs. That, after all, is how Pep Guardiola began at Barcelona.