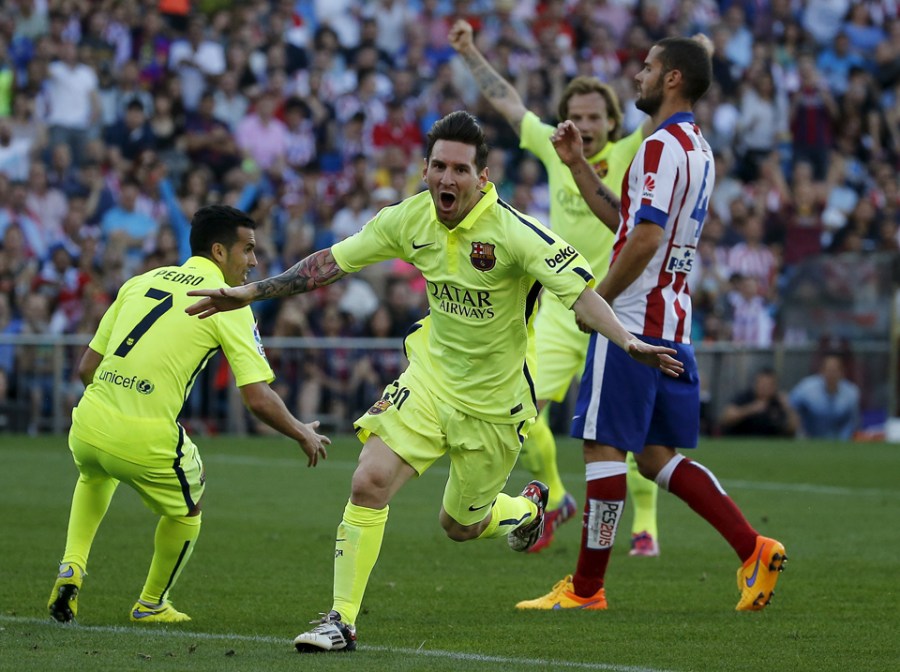 * Cristiano Ronaldo had just scored in Barcelona; Barcelona knew that they had to score in Madrid if they were to take the league title. And six minutes later, they did just that. Leo Messi played a one-two with Pedro, rolled the ball under his studs and placed a perfect shot into the bottom corner. Real Madrid’s 4-1 win in Espanyol, including a seventh hat-trick of the season for Cristiano Ronaldo, could not prevent the inevitable. Exactly a year after Atlético Madrid went to Barcelona and took the title, Barcelona went to Atlético Madrid and took it back.

The last time they had played each other in the league, back in January, Barcelona were on the verge of a crisis. The talk was of a clash between the manager, Luis Enrique, and Messi. The president had sacked the sporting director and his assistant has walked too. Elections had been called for the summer. “Barcelona fall apart,” one headline ran. But that night Barcelona began a run that saw them take the title. In their last twenty league games, they won eighteen, drew one and lost just one.

More than that: the could yet claim a treble. They have a Copa del Rey final to come against Athletic Bilbao and the week after that the Champions League final against Juventus. They have lost just twice in 32, and one of those did not matter — a second leg defeat in Munich was not enough to prevent them reaching the final in Berlin.

It has been an extraordinary season. Between them, Messi, Neymar and Suárez have scored 115 goals, while Claudio Bravo has conceded just nineteen in the league, at a better goal-per-game ratio than any team ever. “The statistics say it all,” Luis Enrique said. The one thing he would not say was whether he plans to continue next season.

* Carlo Ancelotti puffed his way through Madrid’s penultimate game of the season. Suspended, he sat in a private box, smoking on a cigarette. He will still be suspended for the final match against Getafe, meaning that he has probably sat on the Madrid bench for the last time. The only thing that can keep him in a job now is if Madrid fail to find a man who can replace him — not exactly a solid foundation for another year together.

* Ancelotti always said that the title would go down to the very last minute of the very last game. In the end, he was wrong. But if Barcelona tied up the title with a week to spare and Córdoba were sunk sooner, while Villarreal celebrated their return to European competition a fortnight ago, pretty much everything else is still to be decided on the final day, with fates intertwined, particularly when it comes to the relegation zone and the final Champions League spots:

-Atlético are guaranteed a Champions League place, but not yet third place (which means avoiding an August play-off). They’ll be competing with Valencia for that. Atlético play Granada away, needing a point to guarantee third place. Valencia go to Almería. Both opponents are relegation threatened.

-Athletic [52], Malaga [50], and Espanyol [49] are fighting for seventh place and a likely slot in the Europa League. Málaga host Sevilla, Athletic host Villarreal and Espanyol travel to Celta.

-And at the bottom, Granada [34], Deportivo [34], Eibar [32] and Almería [32] are trying to avoid occupying the final two relegation slots. Deportivo face Barcelona at the Camp Nou, but at least it is a Barcelona team with nothing to play for. Granada play Atlético at home. Almería play against Valencia at home. And Eibar, who have won just once in the second half of the season, play at home against already relegated Córdoba. There are 81 possible combinations and ninety minutes to resolve everything.