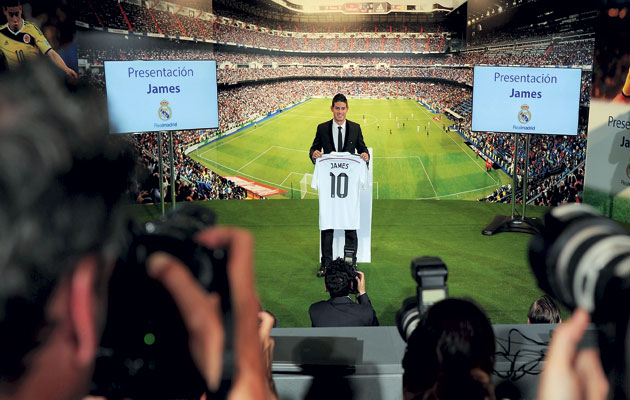 Atletico Madrid’s reward for becoming the first club outside Spain’s big two to win the league in over a decade was to see their best players depart. They had achieved the “impossible” – in the words of their coach – by preventing Real Madrid and Barcelona from winning La Liga, but they could not stop the deconstruction of their team.

As for Madrid and Barca, they are determined not to be denied again.

With every victory, so the door to other clubs opened for Atletico’s players and huge offers were made that were too good to refuse – both for the players and the club. Atletico are still in debt to the taxman and could not hang on to those who wanted to go. Top scorer Diego Costa, Thibault Courtois and Filipe Luis all departed for Chelsea, while Diego Ribas went to Fenerbahce, Adrian Lopez joined Porto and David Villa headed for the USA.

However, Atletico did manage to complete some very good business of their own, bringing in Antoine Griezmann from Real Sociedad and Mario Mandzukic of Bayern Munich.

In the same period, Barcelona signed Luis Suarez for €72million and Ivan Rakitic, who was La Liga’s outstanding midfielder last season, from Sevilla, as well as two goalkeepers and a central defender/left-back in Jeremy Mathieu from Valencia. Interestingly, Barcelona will meet Real Madrid on October 26 – which is the day Suarez’s four-month ban comes to an end.

So as Madrid and Barcelona signed two of the most talented players in the world, the one team who got the better of them last season – and the first to break up the top two at all in five years – have surely been overtaken once again. If Atletico brought hope to everyone, it was diminished in the transfer market.

The amount of talent at the disposal of Real and Barcelona is extraordinary, almost absurd. It is unmatched by anyone anywhere, least of all in Spain.

But if that is a familiar story, it is because it happened last year too. And all year coach Diego Simeone insisted there was no way Atletico could win the league…only for Atletico to win the league – and on a budget a fifth of their rivals.

That title, celebrated by an estimated 200,000 fans on the streets of the capital, can never be taken away from them, although Real’s late, late comeback in the Champions League Final certainly hurt. The fact that Simeone has remained gives supporters hope as his was the one departure that would have been truly disastrous.

After the Final, when asked “what now?”, Simeone said he would study the squad, study the market and come back a month or so later ready to defend the title. The transformation under the Argentinian has been astonishing: a Europa League, Spanish Cup, La Liga title and Champions League Final being testament to his impact. Obstacles are forever placed in the way of his team but they have overcome them all. Can it continue?

The departure of Radamel Falcao 12 months ago seemed to be a disaster but Costa led them from the front. This club has had some hugely impressive strikers over the years – Cristian Vieri, Jimmy Floyd Hasselbaink, Fernando Torres, Diego Forlan, Sergio Aguero, Falcao, Costa – and now Mandzukic.

Realism dictates that this season it will all be about Madrid and Barcelona once again. In a league where more was spent on transfers by Real Madrid’s B team, Castilla, who play in the third tier, than most top-flight clubs, many teams have long since given up trying to compete.

Valencia and Sevilla lost key players to Barcelona this summer, while Athletic Bilbao sold Ander Herrera to Manchester United. Survival, not success, is the key for many. But not Atletico. It will take more than Cristiano Ronaldo, Lionel Messi, Rodriguez, Suarez, Gareth Bale, Neymar, Karim Benzema, Andres Iniesta, Kroos and Rakitic to make them surrender just yet.