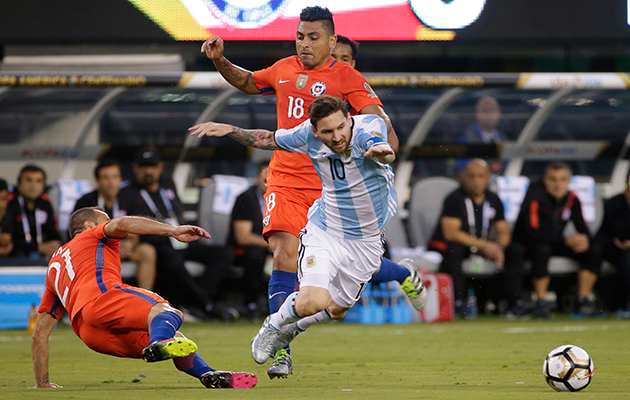 First in the table visit second when Uruguay host Brazil on Thursday in the 13th round of South America’s World Cup qualifiers.
But as the campaign enters into its final third, more drama is to be found further down the table.

Thursday’s stand out game is the meeting in Buenos Aires of Argentina and Chile.  This is, of course, a chance for Argentina to gain some revenge for the penalty shoot out defeats in the final of the two recent Copa Americas.  But the real importance of this match has much more to do with the future than the past.  There is a real risk of one of these teams missing out on a place in Russia.

Chile currently stand fourth, the last automatic qualifying slot.  A point behind them, Argentina are in fifth – the side that finish there will play off against opponents from Oceania.  But by the time the match in Buenos Aires kicks off, things might be looking even worse for both sides.  Colombia get the round underway with a home game against Bolivia.  The Colombians are clear favourites to win – and if the match goes to form, then they will leap ahead of both Chile and Argentina.  The losers in Buenos Aires, then, will probably go into the last five rounds of the competition outside the qualification places – and, assuming a Colombian victory, that will apply to Argentina even in the case of a draw.

Especially worrying for the Argentines is the fact that the following round, five days later, takes them up to the extreme altitude of La Paz to face Bolivia – always a difficult venue for unacclimatised visitors and one that has in the past proved traumatic for Argentina, who went down there 6-1 in the 2010 campaign.  Since the four remaining matches later this year feature demanding trips to Uruguay and Ecuador, failure to beat the Chileans would leave Argentina under serious pressure.

Chile, too, also have cause for unease.  In the short term, Arturo Vidal misses Thursday’s game through suspension, key midfielder Marcelo Diaz is injured and the state of the Alexis Sanchez ankle is a worry.  Looking further ahead, there is still a possibility that they might be stripped of two of their points and three of their goals.  Last September they were held 0-0 at home by Bolivia, who fielded Paraguayan-born defender Nelson Cabrera as a late substitute.  Cabrera was later ruled ineligible – Bolivia awards citizenship to foreigners after three year’s residence, while FIFA demands a five year period.  Since Cabrera did not fulfil this requirement, Chile were awarded the game by a 3-0 margin.  But Bolivia have appealed, and their case will go before the Court of Arbitration for Sport, with a verdict expected in June.

Thursday’s high pressure match is one of the greatest challenges in the history of Chile’s coach, the Argentine-born Juan Antonio Pizzi.  Perhaps his biggest ally is the fact that Lionel Messi played for Barcelona on Sunday evening.  For the 2014 World Cup, the double headed qualifiers were played on Friday and Tuesday.  In this campaign it is Thursday and Tuesday, so there is more time between the games, but less time before the first one.

Argentina showed how this can work in the previous rounds, back in November.  For the second game they managed a modicum of defensive solidity, giving an extraordinary Messi the chance to win the game single handed as Colombia were seen off 3-0.  But in the first game Argentina were a mess, especially at the back, and ended up fortunate to come away from Brazil with only a 3-0 defeat.  Now coach Edgardo Bauza has little time to organise his side before Thursday, with the risk of Messi, now towards the end of the club season, not having shaken off the effects of Sunday’s game against Valencia and the subsequent travel.

Bauza says that he imagines Messi holding the World Cup aloft in the middle of next year.  First the side has to qualify – and going into these matches against Chile and Bolivia, that is not yet a foregone conclusion.