Chelsea’s Andre Villas-Boas may be a forward-thinking, progressive coach, but his attempts to impose a high line on players who seem reluctant, or unable, to adapt have resulted in defeats this season against Manchester United, Queens Park Rangers, Arsenal, Liverpool (twice) and Bayer Leverkusen.

It’s almost obligatory in any piece about Villas-Boas to reference his similarities to previous Porto and Chelsea boss Jose Mourinho, but the most intriguing thing about the two former colleagues is their different tactical approach. While Mourinho
likes his defence to sit deep – as seen nowhere more clearly than in Internazionale’s second leg of the Champions League semi-final against Barcelona at the Camp Nou in 2010 – Villas-Boas prefers his sides to press high up the pitch.

However, that policy has proved problematic for Villas-Boas at Chelsea, whose back four is simply not equipped to play it.

John Terry is a battering ram of a defender who is at his best when the ball is in front of him. But leave space behind him and his lack of pace can be exploited. At 31, the limited pace he did once have is deserting him, making him even more vulnerable. When Terry was at his best he played in combination with a quick, intelligent defender – Ricardo Carvalho or Rio Ferdinand – tidying up behind while he did the hard, physical work, throwing himself into tackles and aerial battles.

At Chelsea this season, though, he hasn’t even had a regular partner, with Alex, David Luiz and Branislav Ivanovic all being used alongside him.

Luiz’s positional sense, in particular, has been called into question at times. The full-backs, similarly, have seemed uncertain in the new set-up, and the suspicion is that age is beginning to sap at Ashley Cole as well. It’s not just the back four, though. In the 5-3 defeat by Arsenal, in particular, Chelsea’s pressing was poor, and that in turn leaves a high line vulnerable to balls played in behind if an unpressured opponent has time to play with calculation and accuracy. 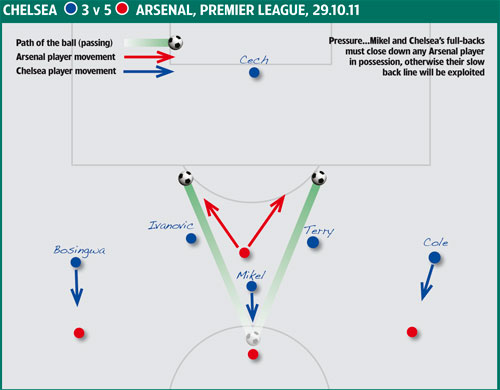 Take the chance Robin Van Persie volleyed over after 12 minutes. This came about because John Obi Mikel was drawn out of position as a result of Daniel Sturridge and Jose Bosingwa failing to close down the Arsenal left-back Andre Santos. That in turn led to Cole being exposed against Theo Walcott. Understandably, Cole sat off rather than risk being roasted by Walcott’s pace, giving the winger – whose delivery has been much improved this season – time to measure his cross.

The first Arsenal goal came about because Frank Lampard, distracted by making a point to the referee, left a gap for Aaron Ramsey to exploit, then neither Terry nor Ivanovic followed Gervinho’s run. Bosingwa was horribly out of position for Arsenal’s second; Mikel, Cole, Ivanovic and Terry were all caught napping by Walcott for the third; and the fourth stemmed from an awful Florent Malouda back pass even before Terry’s slip.

Chelsea’s problem is not one element malfunctioning but repeated individual errors leading to an overall problem. With a deep-lying defence, when roles are more obviously compartmentalised (the attackers attack, the defenders defend), it’s possible for sides to get away with it. Whatever mistakes are made, there will always be a line of four (plus Mikel) to break through further up the pitch. With a high line, though, the whole team has to function as a unit or the slightest flaw will be magnified.

Chelsea’s is not merely an ageing squad, it is a squad set in its ways, and is therefore an old dog being forced to attempt new tricks. Seven of the starting XI in the Premier League defeat by Liverpool in November played for Mourinho at Stamford Bridge. There is dark talk of a cabal of senior figures who dominate the dressing room, and few doubt that players were, at least in part, behind the dismissals of Avram Grant and Luiz Felipe Scolari.

Such an environment makes change difficult; paradoxically, the culture of short-termism at Chelsea, the frequent switches of manager, has made genuine change harder.

Chelsea’s is a squad in need of renewal. It has been allowed to grow old together and this is because no leader since Mourinho has been at the club long enough to begin to impose his vision. The question is whether Villas-Boas is the man to enact that change.

The worrying thing about the 34-year-old’s time at Porto was that he was almost too successful and there was no indication of how he would fare in adversity. Domestically he overcame Benfica and Sporting Lisbon sides who were at a low ebb, and even in the Europa League he managed to avoid teams from England, Germany and Italy, while playing an exhausted Villarreal and an out-of-sorts Sevilla. His first three tests against “big” sides with Chelsea all ended in defeat.

When Villas-Boas was appointed, it was presented as a move for stability, installing a young man who would be given time to rejuvenate the squad in his image. Chelsea, it was implied, bought into his tactical vision. If so, they must have known transition was inevitable.

Either Chelsea give Villas-Boas the time and the resources to overhaul the squad, or they own up to a mistake and axe yet another manager. But that, of course, would leave the new manager to answer the same issues with which the current manager is struggling.