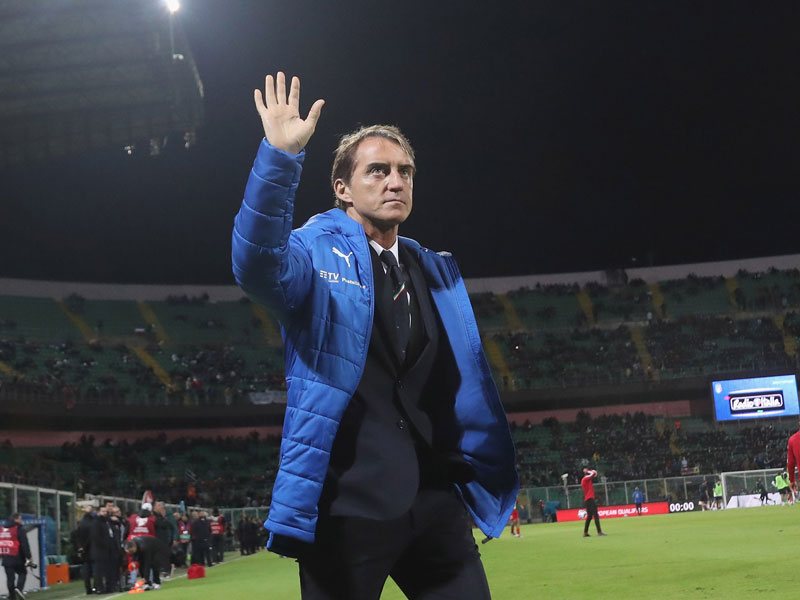 Last Saturday, a small delegation from Italy’s Euro 2020 squad chose to make a symbolic solidarity visit to the city of Venice, the great jewel in the Italian architectural crown currently struggling to deal with severe flooding. Venice is one of the great glories of creation, a magical city built on a lagoon but one that is ever more delicate and whose very survival is threatened by a seemingly unending battle with the Adriatic sea.

As Italian Federation President Gabriele Gravina, Italy Delegation Chief Gianluca Vialli and AC Milan goalkeeper Gigi Donnarumma did the now ritual visit to flooded St. Mark’s Square, Gravina insisted that their presence was above all an expression of their attachment to their homeland:

“We cannot solve any of Venice’s problems but maybe we can point out to those in charge that the time has come to face certain problems. Venice deserves a concrete response…”

Arranged long before the floods, the delegation’s visit came at an especially appropriate moment. Current Italian manager, Roberto Mancini, summed up the symbolism of his team’s visit when he said:

“It is sad to see Venice in this difficult moment but Italians always manage to get back on their feet. Venice, after all, has a winning image worldwide so let’s hope that she brings us some good luck at the European Championships…”

Mancini did not say it but you could argue that as Italian coach, he has managed to put Italian football “back on its feet”. Furthermore, such is his team’s current well being that perhaps it will be Italy who will bring good luck to Venice, rather than vice versa. After all, just hours before their visit, Italy had continued their current good moment when they won their tenth consecutive game and ninth consecutive Euro2020 qualifier when strolling past Bosnia, 3-0 in Zenica, last Friday.

In doing so, Mancini’s Italy went one better than the dual World Cup winning Italy team of the ’30s, coached by the legendary Vittorio Pozzo. Pozzo’s nine match, winning run had, of course, concluded with a win against Hungary in the 1938 World Cup final. Along the way, too, Pozzo’s team had beaten such as France and Brazil, respectively in the quarter and semi-finals.

All of which is probably more impressive than home and away Euro 2020 wins against Bosnia, Finland, Greece et al. Intriguingly, Mancini himself was the first to point this out.

In truth, however, there is a limit to the validity of such “statistical” comparisons. For a start, we are talking about two very different eras, separated by 80 years.   Arguably more importantly, though, is the consideration of where each team’s winning run had come in its own historical cycle.

In 1938, Pozzo, in his fourth coming as Italy coach, was in his ninth consecutive year on the Italian bench, at the helm of an experienced side with which he had already won both the 1934 World Cup and the 1936 Olympic gold medal. Mancini, on the other hand, has led a new look Italy to a Euro 2020 Finals qualification that comes less than two years after that embarrassing failure, under coach Giampiero Ventura, to qualify for the Russia World Cup finals.

Understandably, Mancini has been much lauded by an Italian media more than glad to see Italy restored to its habitual seat at the top table of world football. In the wake of that electrifying 3-0 defeat of Bosnia, the former Italy and AC Milan coach, Arrigo Sacchi, waxed particularly lyrical in his Gazzetta Dello Sport column, writing:

“The Azzurri won, they were convincing, they played good football and they walked off the field to a standing ovation from the Bosnian public who had been struck by the dominance, the quality and the sheer beauty of the football played by our team…”

Sacchi went on to praise the high “pressing”, attacking game of Italy concluding that Mancini’s team has rejected “defensive, over-tactical, constipated and boring football”. Sacchi did not say it, but we all understood it, namely that Italian club and national teams over the years have (just occasionally), resorted to “defensive, over-tactical, constipated and boring football”.

Sacchi praised the example which Mancini was setting for his Serie A colleagues, suggesting that his Italy played a football that “is an example of agression, conviction and correct timing” which represents “an unusual spectacle both for our clubs and in terms of our history”.

In particular, Sacchi praised the manner in which Mancini has introduced younger players to the senior team. Here, too, he has a serious point. In September of last year, Mancini called up then 19-year-old midfielder Nicola Zaniolo of AS Roma, a player who at the time had not played a single game in Serie A. In this case, the rest is a history, a very satisfactory history from the Roma viewpoint.

“I call up young players with plenty of technique. Young players will run and chase and cover for you and play high-up. If you are close to your opponent’s goal, it is much easier to score a goal and you are less likely to concede one. Good technique enables you to hold onto the ball and to attack”.

So far, so good for Mancini. “Il Bello” begins now. Italy may have sparked understandable native enthusiasm but, as of now, it seems only realistic to suggest that when it comes to Euro2020, then France, Germany, Belgium, England and Spain, to name just five, are perhaps still ahead of them.

Given Mancini’s brilliant handling thus far, it is by no means impossible that Italy can close the gap between now and next summer. Not impossible but by no means guaranteed. The road is still rising with Italy but the good thing is that the Azzurri are in the starting line-up, albeit not in pole position, but prominent on the grid.