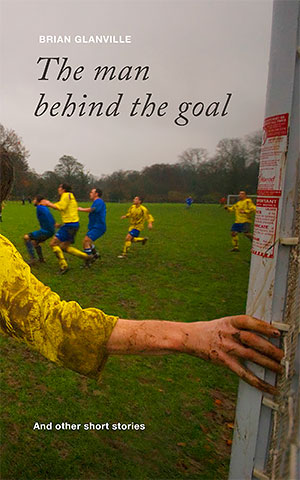 What a delight to have these wonderful stories back in print. To say that Brian Glanville is the Dean of English football fiction is true enough, but much more needs to be added. Because it was Glanville who created the genre. His novels “The Dying of the Light” and “The Rise of Gerry Logan” stand out not only as superb evocations of the world of professional football, but also as remarkable works of art.

Glanville’s artistry shines through these short stories. The prose is steely, terse, colourful, demotic… exactly what is needed to convey the down-to-earth atmosphere of football and footballers.

But there is poetry here too. In the very first paragraph of the title story, we are at “a little football field”, almost deserted, cold, damp… an atmosphere that Glanville fixes at once with just nine perfect words: “raindrops hung from the white crossbars of the goals.”

An English setting, then, and most of the stories are about English football in the 1960s. They recall the crucial moment in the English game as the maximum wage was abolished and big money started to move into the bewildered sport.

The old-timers are all here, the directors – usually local businessmen – and the coaches and players fretting under an archaic system. Glanville portrays them all so well, mostly through dialogue, which his sharp-eared skill reproduces with such fluency.

If this makes the stories sound dated, don’t be deceived. One of Glanville’s coaches laments: “Work rate? What’s all this bloody work rate? Footballers aren’t navvies.” Told that the game is changing, he comments: “Maybe, but it hasn’t changed for the better.” Does any of that sound dated?

Glanville picked on what he – and not many others of that era – could see as the crudity of the English game. One of his players complains: “There wasn’t no fun in the football, clump and bang and marking all the time…” The phrase “We play too much football…” crops up, in the mouth of a strange character who haunts the press box, a hanger-on really.

A sort of con-man – there are several of them in these stories. Guys not averse to shading the truth, but nothing too serious. These are not guys who are embezzling millions, but guys who scalp tickets, guys who just want to be part of the football scene.

They ought to come over as pathetic, but Glanville is never censorious, he treats them kindly, makes them interesting. Like that man in the press box who “had no right to be there”, but always was there. A friend of a journalist, he slowly became a genuine part of the football scene.

As English football struggled to move into the modern world, trying to shed its post-war austerity greyness, the hooligans arrived. They are in “All Rovers Fans”, ugly, menacing, unforgettably etched.

The contrast with Italy – where two of the stories are set – makes the point. Drab England becomes sunny Italy, where the future of the sport is taking shape, where players can earn real money. In “The Agents” Glanville has it all, a tangled tale of two Italian clubs vying to sign a young English star. Beautifully, humorously told. It ends with the lad back in England – “He didn’t like it – the language – the food – everyone speaking Italian.”

There are not many clear winners in Glanville’s tales. In that, they are close to our real world. We hear the voices of ordinary people telling the truth as they know it. It is not a celebrity world, the synthetic smiles and the guarded words of the television interview have yet to take hold.

So we get closeness and familiarity, warmth and humanity in all of these stories. Glanville likes, or at least is intrigued by, these characters, however shady they may be. Even the worst of them, an obnoxious goalkeeper, gets sympathy after his error loses the cup final.

Back to the poetic, and that haunting description I began with – “raindrops hung from the white crossbars of the goals.” Where Blake saw a world in a grain of sand, Glanville evokes a football world in a drop of rain.

That restrained magic, blending the beauty of words and the truth they relate, is vital to these stories. There is nothing else like them in football. If you love the sport, they are for you.

The Man Behind the Goal and other short stories by Brian Glanville (WSC Books, £9.99)