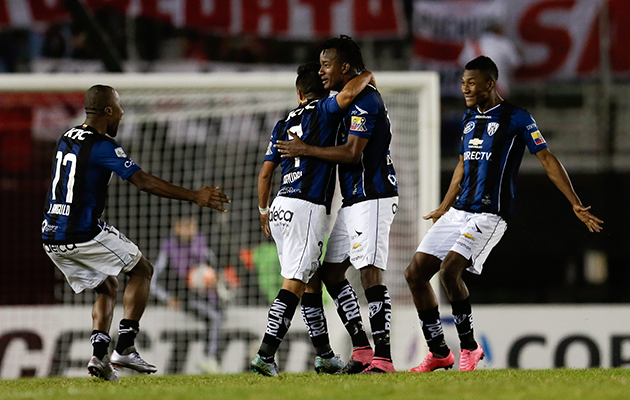 The end of the Premier League season brings some relief for Swansea City’s Ecuadorian winger Jefferson Montero.   He will no longer turn up bleary eyed for midweek training sessions after staying awake into the small hours to cheer on the club who formed him as they make extraordinary progress in the Copa Libertadores.

Independiente del Valle are a tiny outfit from the outskirts of Quito, Ecuador’s mountain capital.  Their rickety little stadium has a capacity little over 7000.  They have only been in their country’s first division since 2010.  And yet this club knocked out the reigning champions, Buenos Aires giant River Plate, to march into the last eight of South America’s premier club competition.  It is a remarkable story – and the club trust that another glorious chapter can be written in the quarter finals, where they face Pumas of Mexico, with the first leg taking place this Tuesday in Ecuador. 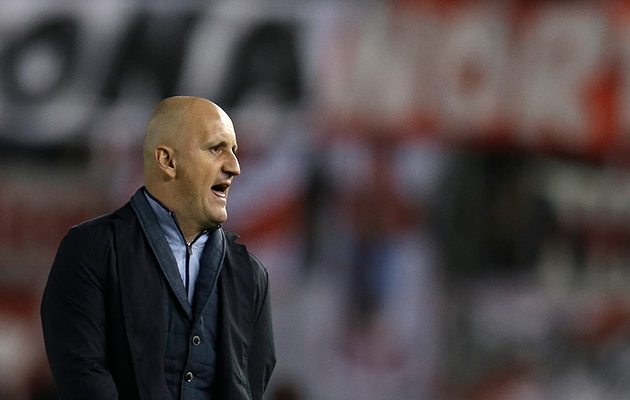 Coach Pablo Repetto has placed the accent on youth.

The rise of Independiente del Valle is based on the successful application of a model that gives top priority to grooming young players – the club either develops its own or picks up youthful promises from other clubs.  Uruguayan coach Pablo Repetto, in charge since September 2012, looks to help the youngsters by thrusting responsibility onto a couple of his experienced compatriots, such as veteran defender Christian Nunez and central midfielder Mario Rizotto – solid, journeymen professionals whose role is to provide leadership.  And the club’s scouting and youth development departments are clearly working efficiently.  So far Jefferson Montero, a key player for the Ecuadorian national team, is their most successful graduate.  But others should follow.

Playmaker Junior Sornoza, linked with a move to England a while back, had a spell in Mexico but has since returned.  For all his fine striking of the ball he may lack dynamism to shine at the highest level.  His deputy Gabriel Cortez shows promise.  On the left wing, 19 year old Bryan Cabezas looks a real find, quick, strong and talented.  Four years older, Jefferson Orejuela has blossomed into a thoroughly proficient central midfielder, full of lung power and happy to take responsibility.  He has been named in Ecuador’s provisional list of 40 for next month’s Copa America, and it would be harsh indeed if he is not included in the 23.

Ecuador’s squad may also find room for the Independiente centre back pairing.  For a few years now this has been something of a problem position.  But in the current Libertadores campaign the lanky Arturo Mina, 26, has come of age, and his partner, Luis Caicedo, 24, has also impressed.  They have needed to stand tall – Independiente have had to pull out two desperate rearguard actions to fight their way into the quarter finals.

Making it into the knock out stage was dependent on avoiding defeat in their final group match, away to Chilean giants Colo Colo.  Mina was in superb form as they sent a packed Santiago crowd away frustrated after a 0-0 draw.  And then, defending a 2-0 lead against River Plate, they had to put up with a ferocious onslaught from the defending champions.  They rode their luck, veteran keeper Librado Azcona made some top saves, and they pulled through 2-1 on aggregate.  This is a group of players, then, who have demonstrated the character necessary to go into some of South America’s historic arenas and come out on top.

This will not come entirely as a surprise for those who have followed the fortunes of this plucky little club.  In their first Libertadores campaign, two years ago, they came very close to making it out of a group which included that year’s champions, San Lorenzo of Argentina.

In 2015 they went out in the qualifying round – which very nearly happened again this year.  In the last kick of the second leg tie, Guarani’s vastly experienced Uruguayan forward Hernan Rodrigo Lopez skied a penalty high into the Asuncion night.  Had it gone in, Independiente would have been out.

But they soon proved themselves worthy of their place, playing out two fine group games with Atletico Mineiro, the most impressive Brazilian side in the field this year.  In Belo Horizonte Independiente quickly went a goal down – but provided stiff opposition for the rest of the match before losing 1-0.  And in Sangolqui, just outside Quito, they won 3-2 – until last week’s single goal loss to Sao Paulo, the only defeat Atletico had suffered in the tournament. 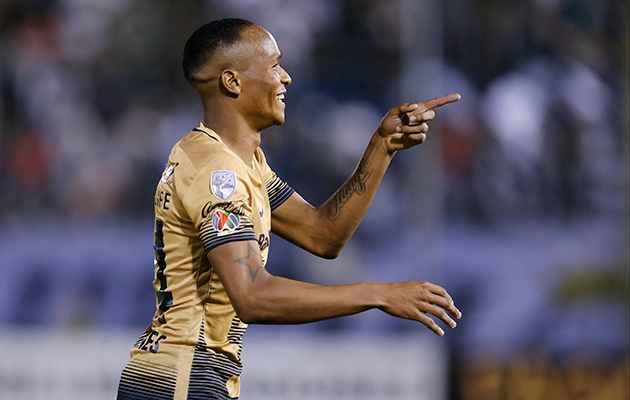 Pumas and the in-form Luis Quinonez are favourites to end Independiente’s Libertadores run.

On that occasion, the altitude of the Andes worked in their favour – playing at 2,800 metres above sea level is not an easy task for visitors who are unacclimatised.  And this is not the case with Tuesday’s opponents.  Pumas of Mexico are used to the conditions.  Moreover, they are a dangerous, free scoring side with a pair of dangerous wingers – the Argentine Ismael Sosa on the right and the Colombian Luis Quinonez at last buckling down to play to his potential on the left.  The Mexicans are favourites to end the run of Independiente del Valle.  But so were River Plate.