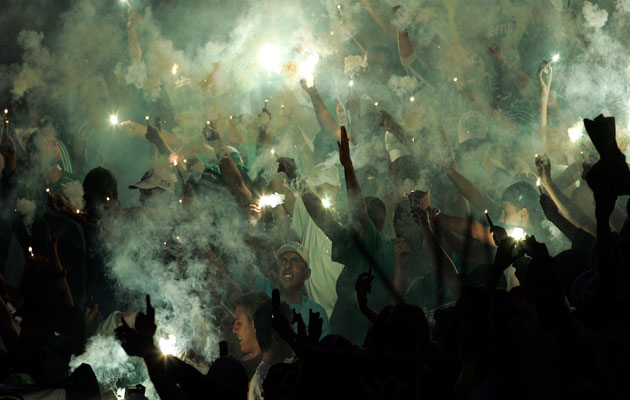 Last week’s column focused on a contemporary contradiction in Brazilian football between twenty first century stadiums and a nineteenth century calendar. The past few days have been dominated by the co-existence of modern stadiums and medieval behaviour.

The most traditional derby in Sao Paulo is between Corinthians and Palmeiras. Both clubs now have new homes – Corinthians have the ground in Itaquera that was built for the World Cup, and at the end of last year Palmeiras inaugurated their Allianz Parque arena, seen by many as the best in the recent surge of Brazilian stadium building.

These plush new venues have become battlegrounds in the conflict between rival supporters that so blights the Brazilian game. Last July, in the first meeting between the two sides at Corinthians’ stadium, visiting fans broke some 250 seats. Fearing similar vandalism inside the ground and violence outside, Palmeiras wanted no visiting fans for Sunday’s first match against Corinthians in the Allianz Parque. The authorities seemed to agree, but Corinthians kicked up a fuss, threatening not to turn up to the game if their supporters were barred. On Friday it was hurriedly agreed that 10% of the stadium would be ceded to Corinthians supporters.

Barring away supporters is always an admission of defeat – that the authorities are unable to control the situation and that fans cannot be trusted to behave. In contemporary Brazil, however, there are reasons to believe that there are times when an admission of defeat is the wisest policy – not least because the right to go to the game was hardly a victory for the average Corinthians fan. In such situations the beneficiaries are usually members of the organised groups – frequently a rent-a-thug army called into action in the internal politics of a club. It is they who receive the allocation of tickets.

Predictably, the scenes outside the stadium were reminiscent of a war zone, with Palmeiras fans clashing with the police as they attempted to charge the visiting supporters. And inside the ground fans of Corinthians set about destroying seats and damaging the toilets. A damage report is expected in the week – but the real damage is to the reputation of the Brazilian game. Scenes from outside the ground were widely televised, and many potential fans will be feeling less disposed to spend their money visiting the fine new stadiums. 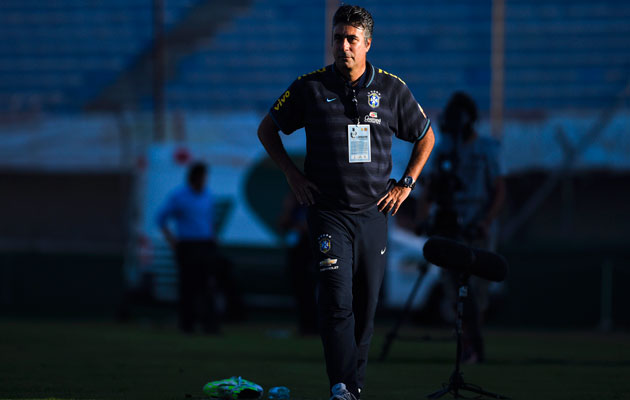 Alexandre Gallo, whose Brazil U-20 side produced a disappointing showing at the South American U-20 championships.

There was some bad news for Brazilian football on the field, as well, with the dismal displays of the Under-20 side in the South American Championships, which came to a conclusion in Uruguay on Saturday. These were Brazil’s first competitive games since the World Cup, and it had been hoped that under intelligent young coach Alexandre Gallo the youngsters would be able to point out a promising road forward.

Instead they were almost a caricature of the road taken by Brazilian football in recent years – physically strong and capable of tearing apart weak sides on the counter attack, but utterly unable to find the guile and imagination to pass their way through stronger rivals. Brazil finished fourth, behind champions Argentina, Colombia and Uruguay. Gallo’s side failed to score against the top three teams, and hardly carved out a single chance. The team could barely thread three passes together. It was all very disappointing, and much more will be expected this June in the World Under-20 Cup in New Zealand.

There was better news, though, for Venezuela, who at the fifth attempt managed their first victory in the reign of coach Noel Sanvincente. Wednesday’s 3-2 win away to Honduras was Venezuela’s first triumph since beating Peru 3-2 in a World Cup qualifier back in September 2013.

On a non-FIFA date, the Venezuela side was made up exclusively of home based players. Honduras, coached for the first time by Jorge Luis Pinto, who did such a fine job with Costa Rica in the World Cup, kept Venezuela under intense first half pressure. But Sanvicente’s side weathered the storm and were effective on the counter attack, going into a 3-0 lead with some 15 minutes to go. Young attacking midfielder Romulo Otero had a hand in all the goals and Arquimedes Figuera, scorer of the second goal, was also impressive.

Honduras hit back with two late goals, and will be gunning for revenge when the teams meet again on Wednesday, this time on Venezuelan soil.