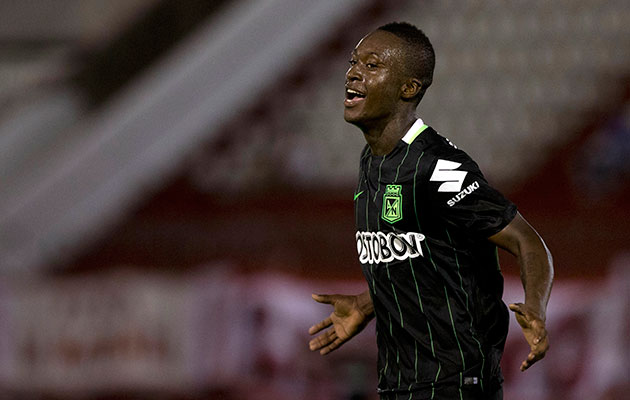 Can he do it again now that the expectations have risen?

Nineteen year old Marlos Moreno was probably the most exciting talent thrown up by South American football last year – but his contribution was restricted to the final few months in the Colombian championship, when he played a vital role in winning the title for Atletico Nacional of Medellin.  So when he made his Copa Libertadores debut last Tuesday not many outside the country had heard of him.

Ninety minutes in Buenos Aires have changed all that.  Moreno’s performance was little short of sensational as his side beat Huracan 2-0.  And he showed that he has already made progress since that domestic title win in December.

He first got into the Nacional side operating on the left flank, cutting in towards his stronger right foot, and was already featuring in a more central role by the end of the season.  But after losing centre forward Jefferson Duque, the 2016 model Atletico Nacional have been forced in a rethink –especially true on Tuesday with key playmaker Macnelly Torres out injured.

Coach Reinaldo Rueda improvised with Victor Ibarbo, newly signed from Watford, as an improvised centre forward, with Marlos Moreno playing off him – a role which was a real test for the youngster.  Moreno opened the scoring with a blistering shot, all ability and conviction.  But if that was eye catching, other elements of his game were even more so.  He was playing in a position which obliged him to make choices, and he responded in fine style.  A sinewy dribbler who can beat his man on either side, Moreno stood out for the number of times he played the Huracan defensive line out of the game with a clever pass – such as the one which set up the second goal for Orlando Berrio.  Moreno drove Huracan to such distraction that Federico Mancinelli, their defensive leader, was sent off for bringing him down with a crude and frustrated challenge.

This Tuesday Atletico Nacional are in action again, this time in front of their own fans.  They are favourites to beat Peru’s Sporting Cristal, and after last week’s events there will plenty of eyes on the home side’s number 29.  That bar has been raised.  Luckily, coach Rueda is a youth development specialist, and is wise to the idea of bringing Moreno along slowly – Moreno only came on for the last few minutes of Saturday’s 3-0 win away to Once Caldas.  Nacional have a big squad, and can rest and replace Moreno as required.  But it will indeed be fascinating to see how he copes with the pressures of expectation brought about by a magnificent Libertadores debut.

Further south, another hugely impressive prospect faces pressure of a slightly different kind as his team prepare for their second match in this year’s Libertadores campaign.
Rosario Central’s left footed playmaker Giovani Lo Celso, another nineteen year old, also came through strongly towards the end of last year as his club came close to winning both the Argentine league and the cup.  They ended the year with nothing – apart from the end of a ten year absence from the Libertadores.

Lo Celso looked in fine form just over a week ago in a thrilling 3-3 league draw with River Plate.  With the vision to see the interesting pass, the talent to deliver it and the personality to demand the ball at important moments, he gave a wonderful display.  A few days later, though, coach Eduardo Coudet strangely left him on the bench for the team’s Libertadores debut, at home to Nacional of Uruguay.

It was a difficult decision to explain.  Marco Ruben, the best centre forward in Argentina, was already out injured, and Coudet also left Marcelo Larrondo, the team’s next most dangerous attacker, in reserve.  The team selection played into the hands of opponents happy to bide their time and spring quick striker Nico Lopez and Sebastian Fernandez.

After Central had shown little penetration, Lo Celso was introduced at half time and Larrondo shortly afterwards, by which time Nacional had taken the lead.  The team clearly improved, but were fortunate to equalise with a dubious last minute penalty, fired home by Larrondo.  Relief at avoiding defeat cannot disguise the fact that in a difficult group Central have dropped two home points – and on Thursday they face a tough trip to Brazil to face Palmeiras.

Lo Celso warmed up with a fine goal on Sunday in the 3-0 win away to Colon – the even better news was that Ruben returned from injury to score the other two.  Perhaps, then, both Ruben and Larrondo will start up front on Thursday.  This, then, will be a big day in the short career of Giovani Lo Celso, who will be expected to be their supply line.