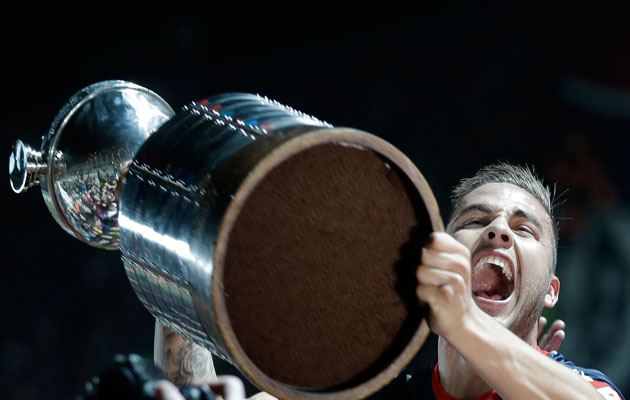 Wanderers of Uruguay against Zamora of Venezuela looked like a low key curtain raiser for the group phase of the Libertadores; in the event, it was full of fireworks.  The hosts had to come from behind twice to win 3-2, and along with the five goals there were five red cards.  It was a pulsating way to kick off what had shaped up to be the most intriguing Libertadores of recent times – and without doubt the opening week lived up to that billing.  These were some of the highlights;

Number of away wins
Last year’s group phase contained 54 home wins and 19 away.  This ration of around 3:1 is standard for both the Libertadores and South American World Cup qualification – with vast distances, logistical problems, intimidating atmospheres, climatic differences and significant factors such as altitude, life is hard for the travelling team.  The first week, though, featured 6 home wins and 5 away – and included in those home successes are two wins for Bolivian sides at extreme altitude.  This, then, was a week full of striking achievements by the visiting sides.

Emelec of Ecuador raised hopes of being this year’s surprise side with a competent 1-0 win away to Universidad de Chile.  Colombia’s Santa Fe came up with a classically disciplined display to draw the sting of Atlas of Mexico and then break out to come home from Guadalajara with the three points.  And then there were the Argentines, which brings us on to the next point.

An exciting year for Argentina
With the big guns back in the tournament this year under the command of a new generation of attacking coaches, the spotlight was always going to be on the Argentine contingent in this year’s competition.  True, River Plate, worn down by altitude, fell to a couple of late goals away to San Jose of Bolivia.  But the other three teams in action all won away from home.

In the case of defending champions San Lorenzo it was perhaps more a case of mental strength than outstanding quality that enabled them to turn the tables against Danubio of Uruguay and win 2-1 with two late goals.  Boca Juniors did not look like world beaters in their 2-0 win against Palestino of Chile.  But it was an excellent result against opponents who have been in competitive action since the start of the year, and who fought their way past Nacional of Uruguay in the qualifying round.  Boca coach Rodolfo Arruabarrena must have been happy with the two goals; the first emerged from a passing movement of laudable patience, the second underlined the promise of new flavour of the month, winger Sebastian Palacios.

Pride of place, though, goes to Racing and their magnificent 5-0 win away to Deportivo Tachira of Venezuela, who had eliminated Paraguay’s Cerro Porteno in the qualifying round.  Returning to the competition for the first time since 2003, Racing showed the virtues that made them Argentine champions at the end of last year.  The stand out aspect of Diego Cocca’s side is the relationship between veteran centre forward Diego Milito, with his intelligence and technical quality, and the thrust and skill of Gustavo Bou, who scored three and laid on the other two as Tachira were torn apart.  Racing, then, travelled up to the rooftop of the continent to shout that they will be one of the team’s to watch in this year’s competition.

Can Brazil hit back this year?
After a dreadful 2014 much is expected of Brazil’s experienced contingent in this year’s competition.  They have a huge financial advantage over their rivals, enabling them to snap up big name players from elsewhere on the continent – or from Europe, such as Anderson, who has joined Internacional from Manchester United.  He, though, had a Libertadores debut to forget, subbed after 35 minutes away to The Strongest of Bolivia, unable to cope with the altitude of La Paz.  In the conditions the 3-1 defeat was not a surprise, and perhaps 2013 champions Atletico Mineiro have more cause for concern after a very poor second half performance and a 2-0 defeat away to Colo Colo of Chile.  Theirs is a difficult group, as is that of Sao Paulo, who have much to think about after getting their campaign off to a dismal start, also going down 2-0.  The one bright spot for Brazil was that the conquerors of Sao Paulo were local rivals Corinthians, taking promising shape in this latest spell under consistently impressive coach Tite.  The opening goal, finished off by marauding midfielder Elias after a quality passing move, is something the 2015 model Corinthians are seeking to produce on a regular basis – a good sign both for their Libertadores campaign and for Brazilian football.